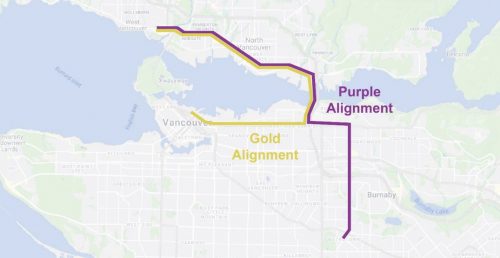 “The collaboration between the partners of North Shore Connects showcases what can be achieved when local governments work together towards a common goal. Building on the excellent planning work and priorities identified by INSTPP (Integrated North Shore Transportation Planning Project), North Shore Connects will continue to implement the recommendations and suite of projects required to improve transportation options and reduce congestion on the North Shore,” said Mayor Mary-Ann Booth, District of West Vancouver.

North Shore Connects released an economic impact study that looked at the benefits of a Burrard Inlet Rapid Transit (BIRT) investment for the North Shore, the Metro Vancouver region, as well as provincial and national economies. Important benefits include:

“North Shore Connects will support and enhance the sustainable development of Squamish Nation’s lands and economic growth goals. We will work together to reduce congestion and improve regional access for our community members, providing better connections between our reserves and their associated family and nation services, in addition to providing more connections to regional jobs,” said Squamish Nation’s chairperson Khelsilem.

This benefits assessment will be presented to the Mayors’ Council and TransLink with the goal of prioritizing BIRT for early investment as part of the region’s next round of transit and transportation investment planning. Once an investment in rapid transit over the inlet is confirmed as part of the regional planning process, North Shore Connects will support TransLink, government agencies, and stakeholders to determine the most appropriate alignment and travel technology.

“We all want to move from place to place as efficiently as possible. But for too long people on the North Shore haven’t had access to the transportation options they need,” said North Vancouver Mayor Linda Buchanan. “That’s why North Shore Connects will make the case for rapid transit across the Inlet. With the benefits assessment completed, and willing partners at the table, we will deliver a transportation network that works for all people.”