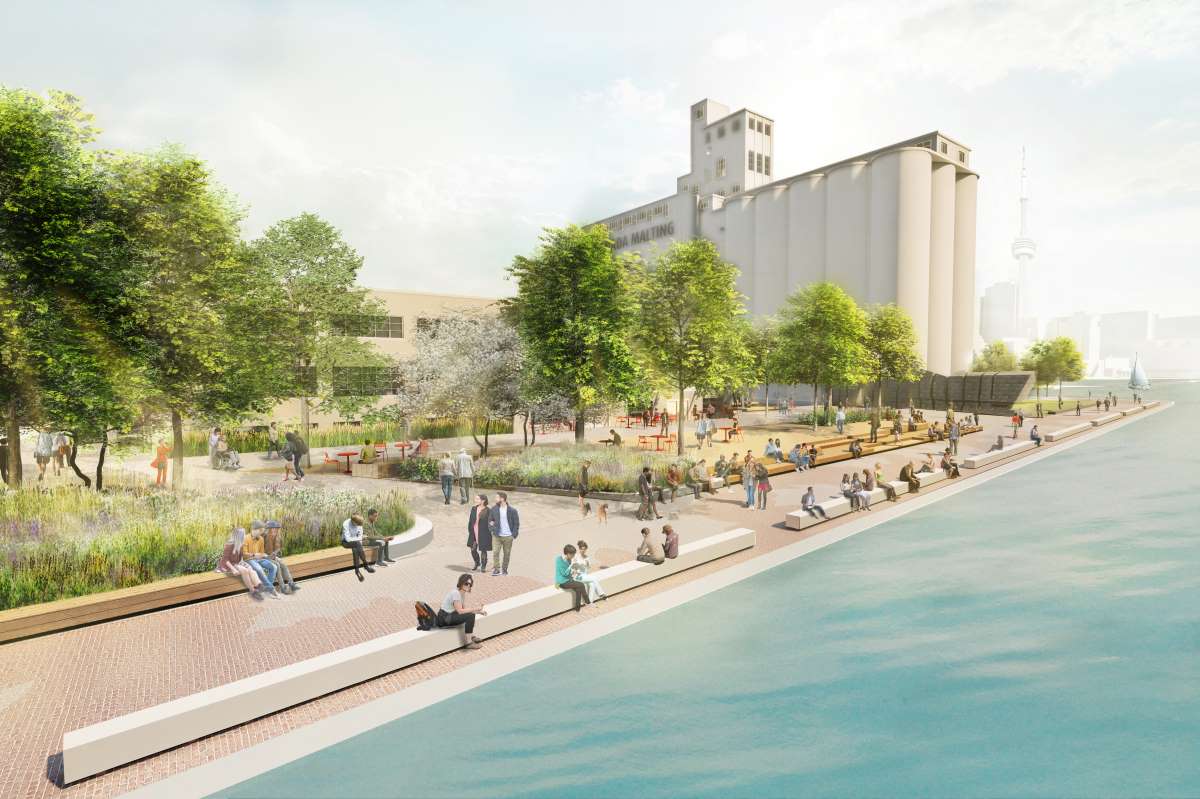 A special ground-breaking event was held in Toronto to launch phase two construction of the Bathurst Quay Neighbourhood Plan (BQNP).

As part of the event, project partners and stakeholders gathered to officially open a new water’s edge promenade and rebuilt dockwall along the central waterfront’s Western Channel. As part of the announcement, the City of Toronto also officially launched the next construction phase for the BQNP, which includes the transformation of a vacant office building into a new waterfront arts and cultural hub, and rehabilitation and restoration of the heritage-designated Canada Malting silos.

“This Bathurst Quay waterfront project has been an enormous undertaking dating back many years,” said Mayor John Tory. “I am thrilled about the progress that’s been made so far and applaud the efforts made by all of our partners who all share the same goal of improving our city’s waterfront.”

Since the project was approved by City Council in 2017, the City has been leading a multi-project, multi-partner effort, including multiple City divisions, with funding and project delivery from external partners such as the Canada Ireland Foundation, Ports Toronto, the Waterfront BIA, Toronto District School Board and the Waterfront Neighbourhood Centre. The project will ultimately bring improvements to the surrounding Bathurst Quay neighbourhood, as well as to the historic Canada Malting property.

“Our ongoing revitalization work is about opening up access to our city’s waterfront, and creating new, dynamic public spaces,” added Councillor Joe Cressy (Spadina-Fort York). “The new water’s edge promenade and rebuilt dockwall at Bathurst Quay have opened up opportunities for community space, which will only be increased as we begin the transformation on an empty office building into a new arts and cultural hub. Along with the restoration of the historic Canada Malting silos, the City of Toronto and our local partners — especially the Canada Ireland Foundation, the Bathurst Quay Neighbourhood Association, The Waterfront BIA, TDSB and Ports Toronto – are helping to transform Bathurst Quay into a vibrant waterfront destination.”

The first phase of construction for the BQNP project broke ground in October 2019 and was completed in early 2021. That phase delivered needed environmental approvals and remediation, more space for public use by working to reduce the footprint of Billy Bishop Toronto City Airport, critical dockwall reconstruction and a new water’s edge public promenade along the south edge of the property.

The next phase of construction will begin this fall and includes two significant revitalization projects, both expected to be complete by 2023:

• Rehabilitating and restoring the heritage-designated Canada Malting silos. This work includes creating a pedestrian “portal” through the silos, containing an interpretive installation on the history and significance of these heritage-designated structures, as well as enabling investments (such as restored hydro connection, water-proofing, and other repairs) in the structures to support their future planned re-use and activation.
• Repurposing a derelict office building on the site into the “Corleck Building” — a new waterfront hub for arts and culture to be operated by the non-profit Canada Ireland Foundation, a long-standing partner to the City in creating commemorative parks and open spaces.

The third and final construction phase – set to begin in summer 2022 – will deliver a significant new waterfront plaza on the malting property that will include seating areas by the water’s edge, purposefully-designed spaces for hosting occasional special events, and ambient lighting that can transform the malting silos into iconic waterfront beacons. The final public realm design will also include a new parkette and public art mural on nearby Eireann Quay, to connect each of the Bathurst Quay projects to each other, to the Bathurst Quay neighbourhood, and to the water’s edge.