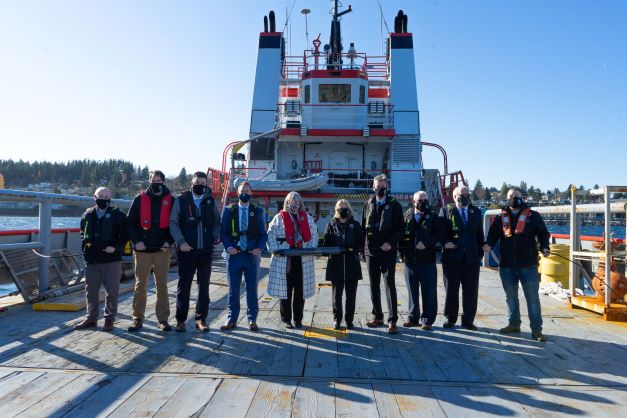 Joint venture partners Strathcona Regional District and CityWest, on behalf of their partners in the federal and provincial governments, announced that the construction phase of the Connected Coast project has officially begun.

“The COVID-19 pandemic has shown us the importance of quality, high-speed Internet to learn, do business, stay healthy, access services and keep in touch with loved ones,” said Lisa Beare, B.C’s Minister of Citizens’ Services. “Through Connected Coast, people and businesses in remote and underserved communities along B.C.’s coast can stay connected and participate in economic opportunities — faster. We thank our partners, including the federal government, CityWest, Strathcona Regional District, Indigenous communities and local governments for helping to connect British Columbians to the opportunities they deserve.”

The commencement of the project was celebrated at an event in Campbell River, one of the future landing sites for the project.

The $45.4 million Connected Coast project, funded by the federal and provincial governments, is co-managed by CityWest and the Strathcona Regional District. It is an undersea cable project that will bring high-speed Internet accessibility to 139 rural and remoted coastal communities, including 48 Indigenous communities – representing 44 First Nations – along the BC coast from north of Prince Rupert, to Haida Gwaii, south to Vancouver, and around Vancouver Island.

“The start of construction is an exciting milestone for the Connected Coast Project,” said Brad Unger, chair, Strathcona Regional District Board. “Momentum is building. Rural and remote communities will soon have the same digital opportunities as urban centres. We are steps closer to benefiting from improved connectivity.”

Announced in 2018, the project’s agreements were finalized in early-2020, and shortly thereafter went through an extensive permitting and review process. The main contractor for the project, Baylink Networks, was announced in September 2020, and they quickly went to work procuring the necessary materials. CanPac Valour, the vessel that will be laying the undersea cable, is currently in Campbell River being outfitted for its long journey – she arrived in Canadian waters in mid-October.

“This event is the culmination of hard work for everyone involved in the Connected Coast project, from our funders to the project managers to the permitting team,” said Stefan Woloszyn, CEO of CityWest. “We’re thrilled that this project is officially launching, and we’re looking forward to seeing how this huge fibre-optic line will benefit the lives of the hundreds of thousands of people who live along its route.”

The subsea fibre cable will run over 3,400 kilometres along the coast of B.C., including a link to Haida Gwaii and all around Vancouver Island – one of the longest coastal subsea networks in the world. It will be laid in an environmentally-friendly manner on the ocean floor. The fibre itself, which is protected by steel-strength members and a tough outer sheath to ensure it’s not damaged, consists of glass strands about as thick as a strand of human hair. When it’s operational, hundreds of gigabits of data will stream through it every second.