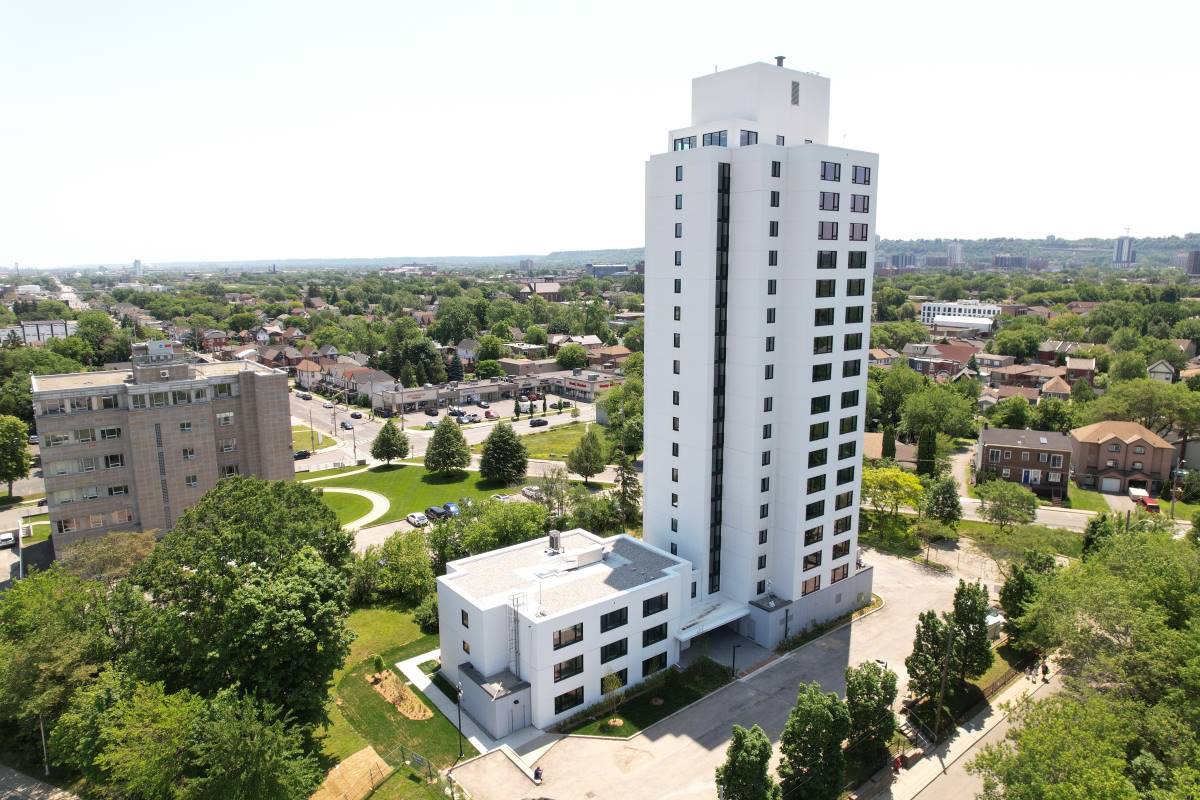 As an example of Canada leading in large scale net-zero retrofits, the 18-storey, 146-unit City Housing Hamilton building has achieved a staggering 94 per cent reduction in greenhouse gas emissions and a 91 per cent reduction in heating energy demand. At its peak, the total energy required to heat and cool a unit would be equivalent to the energy needed to power three incandescent light bulbs.

“We could not be more thrilled that the Ken Soble Tower project has achieved Passive House – EnerPHit certification,” said Chris Ballard, CEO, Passive House Canada. “With over 10,000 towers across Canada in need of deep energy retrofits, the team at ERA Architects, PCL and CityHousing Hamilton have shown great leadership and we congratulate them on this tremendous achievement.”

To meet the rigorous Passive House standards, a dynamic team specializing in apartment retrofits was brought together. This included prime consultant ERA Architects, a Toronto-based architecture firm known for its deep expertise in low-carbon retrofits and the force behind the Tower Renewal initiative, and PCL, Canada’s largest general contractor with deep expertise in building revitalization and in-house envelope engineering.

Using the Passive House EnerPHit standard, the Ken Soble Tower was retrofitted to support resident health and climate resilience, with embodied carbon in the building’s structure being saved through building re-use and revitalization of 146 units of affordable senior’s housing that will continue to serve the community for generations to come.

The retrofit also included a reconfiguration of all indoor and outdoor spaces to accommodate aging-in-place. Over 20 per cent of apartment suites now meet barrier-free standards, with expanded community facilities that support seniors’ programming.

Using 2050 temperature projections as a guiding foundation for the design, the Ken Soble Tower is climate resilient, supporting indoor health and comfort during both extreme heat and cold climate events anticipated in coming decades. Building performance was achieved in part through an ultra high-performance building envelope, with exterior and interior insulation that meet stringent airtightness requirements, triple-glazed windows, and heat recovery in all building penetrations. Obsolete and unhygienic HVAC systems have been fully modernized to provide fresh air to each suite.

To achieve EnerPHit certification, the team had to confirm that the final building was constructed and performed as designed. This was achieved through a comprehensive air tightness testing and quality management program that was developed by the project team and guided by PCL’s in-house envelope engineer and construction team. The effectiveness of PCL’s quality program was demonstrated by final operational whole building airtightness tests that bettered targets by more than 50 per cent at 0.235 air changes per hour (ACH) at 50 pascals pressure (Pa).

As the oldest high-rise multi-residential building in CityHousing Hamilton’s (CHH) portfolio, Ken Soble Tower at 500 MacNab Street North has stood proud in Hamilton’s West Harbour neighbourhood since 1967. The building was fully occupied until 2014 when a mix of aging infrastructure and increasing capital costs led it to fall into disrepair.

“We are very proud to have worked alongside CityHousing Hamilton to realize the renewal of the Ken Soble Tower as affordable and resilient housing, and one of the largest EnerPHit projects in the world,” says Graeme Stewart, Principal, ERA Architects. “Showcasing that low carbon retrofits are the path for a resilient future, offering health, safety and comfort to residents, the Ken Soble Tower is a true model for addressing the growing climate and housing crises of our time.”

Following several studies and consultations with residents and community members to explore the future of the building, including renovation, sale or replacement, a decision was made to retrofit the tower in 2016. Through the vision and leadership of the CityHousing Hamilton Board and CEO Tom Hunter, the Passive House standard was chosen for the project – a first of its kind in North America.  The project is a showpiece for Canada’s ambitious National Housing Strategy, a Federal initiative to ensure the modernization and decarbonization of Canada’s affordable housing.

Through a two-year monitoring process, the Ken Soble Tower will become a teaching tool, offering real-time lessons in retrofit design. CHH, in partnership with the University of Toronto, ERA and PCL, will study and measure the impacts of the building on its residents and surrounding environment, including building performance, resident health and safety, and economic impacts, among others.