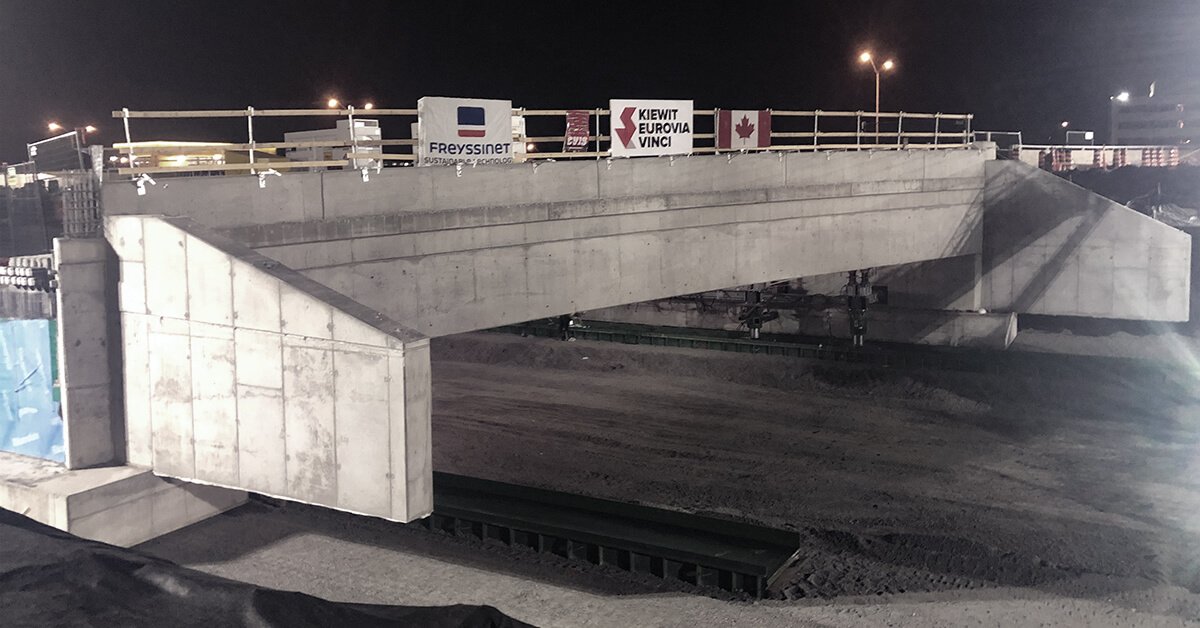 WSP, along with its EWC Designers Joint Venture project partners and Design-Builder KEV, captured the 2022 Transportation Infrastructure Innovation Award from the Ontario Road Builders Association (ORBA). The awards were announced on at ORBA’s recent 2022 Summit.

The award was given to the team for its work on the Pinecrest Road lateral slide rapid bridge installation in Ottawa. The bridge is part of the Confederation Line West extension, which will add approximately 15 kilometres of rail line and 11 new or redeveloped stations to the City of Ottawa’s light rail transit system.

Because of the traffic volumes on Pinecrest Road, and the significant disruptions that a traditional bridge replacement would cause, it was decided that the structure would be replaced during a 120-hour closure of the road using accelerated bridge construction methodologies. A Single Span Buried Rigid Frame bridge was decided as the optimal replacement structure. The lateral slide operation used the Freyssinet-Hebetec Air-Pad-Sliding (APS) System which consists of an air pad system used to lift the structure and significantly reduce the coefficient of friction during sliding. This was the first application of this particular technology in North America.

“Using the lateral slide system, we were able to quickly and efficiently install a new, permanent bridge structure that will support road and rail users. Thanks to this innovative approach, we were able to significantly reduce the disruption caused to the local community and the travelling public,” said Eric Peissel, project executive for the EWC Designers Joint Venture and WSP’s global director for Transport and Infrastructure

The Transportation Infrastructure Innovation Award is given “to recognize innovative technologies and methods, applied on actual projects or in activities or processes, which improved the quality and/or reduced the cost of construction.”

The EWC Designers Joint Venture is led by WSP and Hatch, with support from Perkins + Will and Diamond Schmitt Architects (architectural services), and Thurber Engineering and Jensen Hughes (specialty sub consultancy). The Design-Builder KEV is a Joint Venture formed of Peter Kiewit and Sons, Eurovia and Vinci.

Three bridges to be replaced in Western Newfoundland