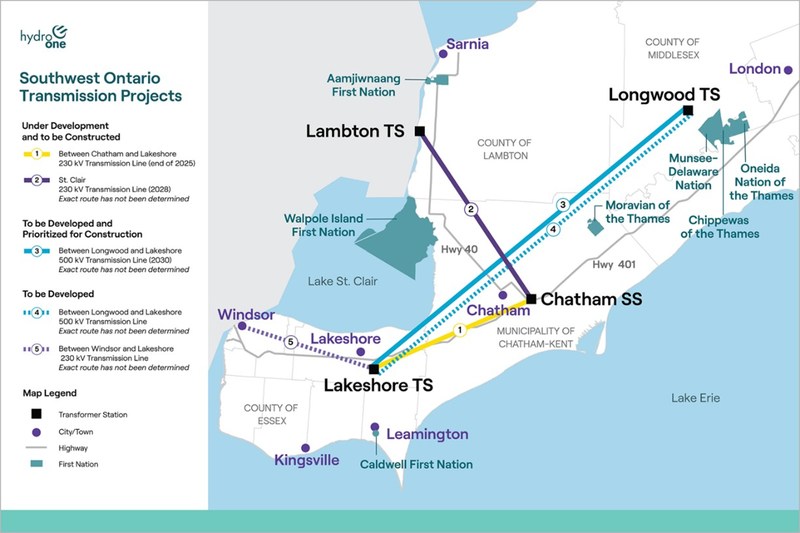 This is in addition to Hydro One’s previous transmission designation for the Chatham to Lakeshore line in 2020.

“Hydro One is proud to transmit low-carbon electricity to Ontario’s businesses and communities and we are uniquely positioned to facilitate the transition toward a more sustainable future,” said Mark Poweska, president and CEO, Hydro One. “Early engagement with Indigenous communities, municipalities and residents is vital to project planning and development and we are committed to engaging throughout the lifecycle of these projects. We are excited about today’s announcement and the partnership between Hydro One, the local business community and municipal and provincial governments to advance critical infrastructure.”

“Our government is supporting the incredible growth in Southwest Ontario by accelerating the development of new transmission lines that will power the new Stellantis-LGES battery plant, the growing greenhouse sector and other job creators,” said Todd Smith, Minister of Energy. “As our government reduces the price of doing business, including by lowering electricity prices by 15-17% for large commercial and industrial customers, we have seen significant new investment. Today we are demonstrating our commitment to build the critical infrastructure to support those new jobs.”

The development portion of these projects includes Indigenous and community engagement, a preliminary engineering design, an estimation of cost and the Environmental Assessment.

“The City of Windsor is united in supporting this transmission project – not only is it needed to secure the battery plant, but to make any future investment in our region possible,” said Drew Dilkens, Mayor of Windsor.

Current projects under development and planned for construction:

“Our key industries have expressed the critical need for increased power and adequate infrastructure to supply the growing regional demand. The expansion of the designated new electricity infrastructure is essential to economic growth and prosperity in Windsor-Essex,” said C. Stephen MacKenzie, president and CEO, Invest WindsorEssex. “As the lead economic development agency for the region, Invest WindsorEssex strongly supports the prioritization of this transmission project in southwestern Ontario to ensure continued local and global investment.”

Projects to be developed and prioritized for construction:

Projects to be developed with scope to be further refined through planning by the IESO: