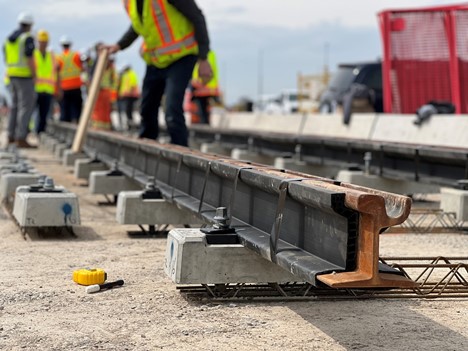 Track work for the future Hazel McCallion light rail transit (LRT) line, also known as the Hurontario LRT, are starting at the project’s operations, maintenance and storage facility, located just south of Highway 407 on the border of Brampton and Mississauga.

This important milestone marks a step forward for the 18-kilometre rapid transit being built along Hurontario Street in Peel Region.

The first tracks are going in at the project’s nerve centre, the operations, maintenance and storage facility (OMSF).

The OMSF will be the hub of the new transit line, featuring a repair shop, vehicle cleaning facility, material storage and capacity for 42 Alstom light rail vehicles.

In November, the first set of rails being delivered to OMSF for the Hurontario light rail project.

“Rapid, reliable, and environmentally friendly light rail transit is that much closer to being realized from Mississauga to Brampton and all the connections in between,” said Mobilinx superintendent, Devin McAndrew.

“Track installations are starting at OMSF with crews moving out to Hurontario, then north to Steeles, and south to Port Credit and all the way up the line.”

The first stages of the guideway construction are set to take place from OMSF, to Edwards Boulevard, on Topflight Drive and along Hurontario Street and just south of Highway 401 from Matheson Boulevard to Britannia Road from south to north.

In total, the project will have:

“Fast forward a few more stages of track construction and this will eventually culminate in substantial completion throughout the corridor,” says Afzal Memon, Metrolinx senior project manager of rapid transit.

Featured image: The first section of track being laid at the OMSF for the Hazel McCallion LRT. (Metrolinx image)