Develop Nova Scotia, the Crown corporation responsible for developing and implementing a strategy to provide high-speed Internet access across the province, has announced more expansions to existing contracts.

The expansions to the Internet for Nova Scotia Initiative projects provide access to high-speed internet connections to an additional 5,600 homes and businesses, extending coverage to 99 per cent of Nova Scotia.

“Bringing high-speed internet access to more Nova Scotian homes and businesses remains the priority of the Internet for Nova Scotia Initiative. As we’ve promised from the beginning, we have never stopped working and we continue to push farther as fast as we can,” said Nova Scotia’s Minister of Business Geoff MacLellan.

Projects associated with the expansions are in Zones 1 (Western Nova Scotia), Zone 3 (Annapolis/Hants), and Zone 4 (South Shore). By expanding existing projects, Develop Nova Scotia continues to accelerate timelines for these homes and businesses to be connected. The trust is investing $29 million in these contract extension projects, with leveraged funds of $8 million from other levels of government and the private sector.

These contracts are with pre-qualified internet service providers Mainland Telecom, Bell Canada and Cross Country Communications and will provide small communities across the province with high-speed internet, at speeds higher than Canadian Radio-television and Telecommunications Commission (CRTC) targets. 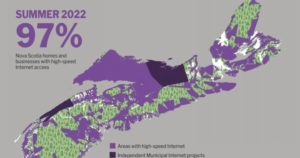 Preparatory and engineering work will begin immediately on the contract extensions, and it is expected all homes and businesses covered by these extensions will have access to improved network by the end of or before 2023. Timelines for access to connections will vary by community and will be further refined by providers within the next several months.

“While tens of thousands of Nova Scotians have already or will soon benefit from this effort, it’s not time to rest just yet,” said Jennifer Angel, president and CEO, Develop Nova Scotia. “We’re getting close, but we have more work to do to make sure as many Nova Scotians as possible can work, study, build their businesses and connect with family and friends virtually.”

Since the first Internet for Nova Scotia Initiative projects were announced in February 2020, approximately 31,000 of a total of 87,200 homes and businesses already have the network in place to provide new or improved high-speed internet, and providers are working to connect the rest as quickly as possible. Work will continue with internet providers in an effort to reach as close to 100 per cent of homes and businesses as possible.

The total investment to date of $163 million by the province through the Nova Scotia Internet Funding Trust has leveraged $137 million of additional funding, of which $118 million is from the private sector.