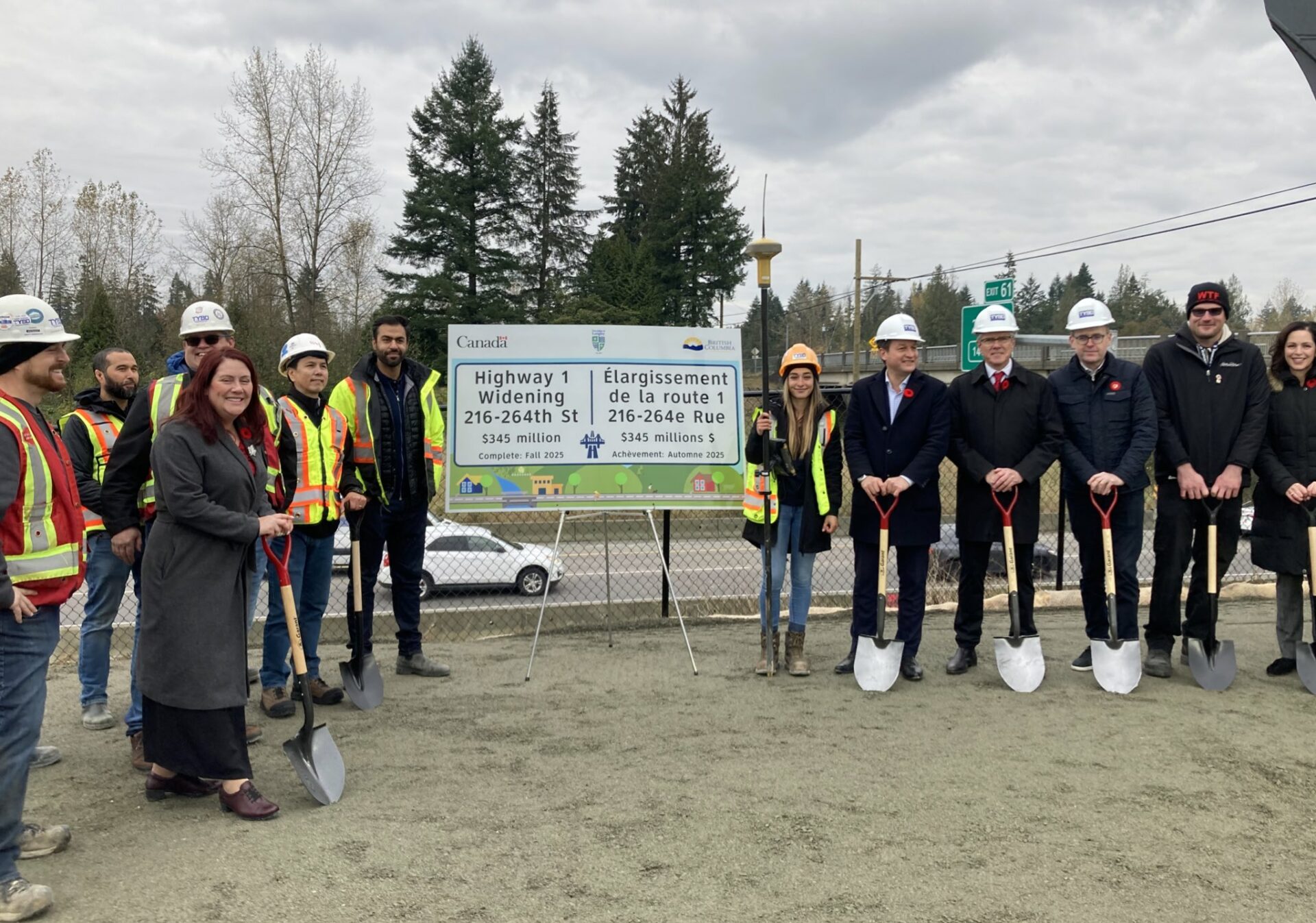 The Government of British Columbia announced that construction is set to begin on the Province’s Highway 1 216th–264th Street Widening Project.

The replacement of the Glover Road crossing is a key component of the government’s commitment to widen Highway 1 from 216th Street to 264th Street. This is the first of the project’s three major works contracts.

Ground was broken at the project site by Rob Fleming, B.C.’s Minister of Transportation and Infrastructure; John Aldag, MP for Cloverdale-Langley City; Megan Dykeman, MLA for Langley East; and Eric Woodward, mayor of the Township of Langley.

“The Glover Road crossing replacement is a major milestone as part of our government’s commitment to widen Highway 1 in the Fraser Valley. These needed upgrades will help get goods moving smoothly along this important trade corridor and make it easier for people to get to work and back home again to their families,” said Rob Fleming, B.C.’s Minister of Transportation and Infrastructure.

As part of this replacement project, the height clearance of 4.3 metres at the existing crossing will be improved to current standards to a minimum height clearance of 5.2 metres. This will improve safety and ensure that more commercial and oversize vehicles are able to travel on this route. The nearby CP Rail overhead and the 232th Street interchange will also be replaced with higher structures as part of the overall Highway 1 216th–264th Widening Project.

“This milestone for the project to widen Highway 1 signals our government’s commitment to building better-connected communities and improving the lives of Canadians. The new high-occupancy-vehicle lanes and other upgrades, particularly to active transportation infrastructure, will help more people get where they need to go safely and efficiently while encouraging those in transit to choose more sustainable transportation options,” said John Aldag, MP for Cloverdale-Langley City.

Completion of the Glover Road crossing is anticipated in summer 2024. The other elements of the widening project are expected to be tendered this winter, with work starting by spring 2023. This includes replacement of the existing railway crossing just east of Glover Road, the replacement of the 232nd Street interchange and widening Highway 1 from 216th to 264th to add an extra lane in each direction.

“As one of the fastest-growing communities in British Columbia, improving travel along Highway 1 is so important to residents of the Township of Langley. The upgrades to the overpass and the new crossing at Glover Road are the first phase of widening Highway 1 through the Township of Langley and will benefit drivers, cyclists and pedestrians alike.” said Megan Dykeman, MLA for Langley East.

The Highway 1 216th–264th Street Widening Project is valued at $345 million. The Government of Canada is contributing as much as $95.9 million, the Province of B.C. is contributing $225.58 million and the Township of Langley is contributing the remaining $23.37 million.

“The Township of Langley has been working with the Province for years on these long-needed improvements to Highway 1. Given our long collaboration on this project, it’s exciting to see work underway to help the movement of goods, improve road safety and address increasing traffic volumes in the region,” said Eric Woodward, mayor, Township of Langley.