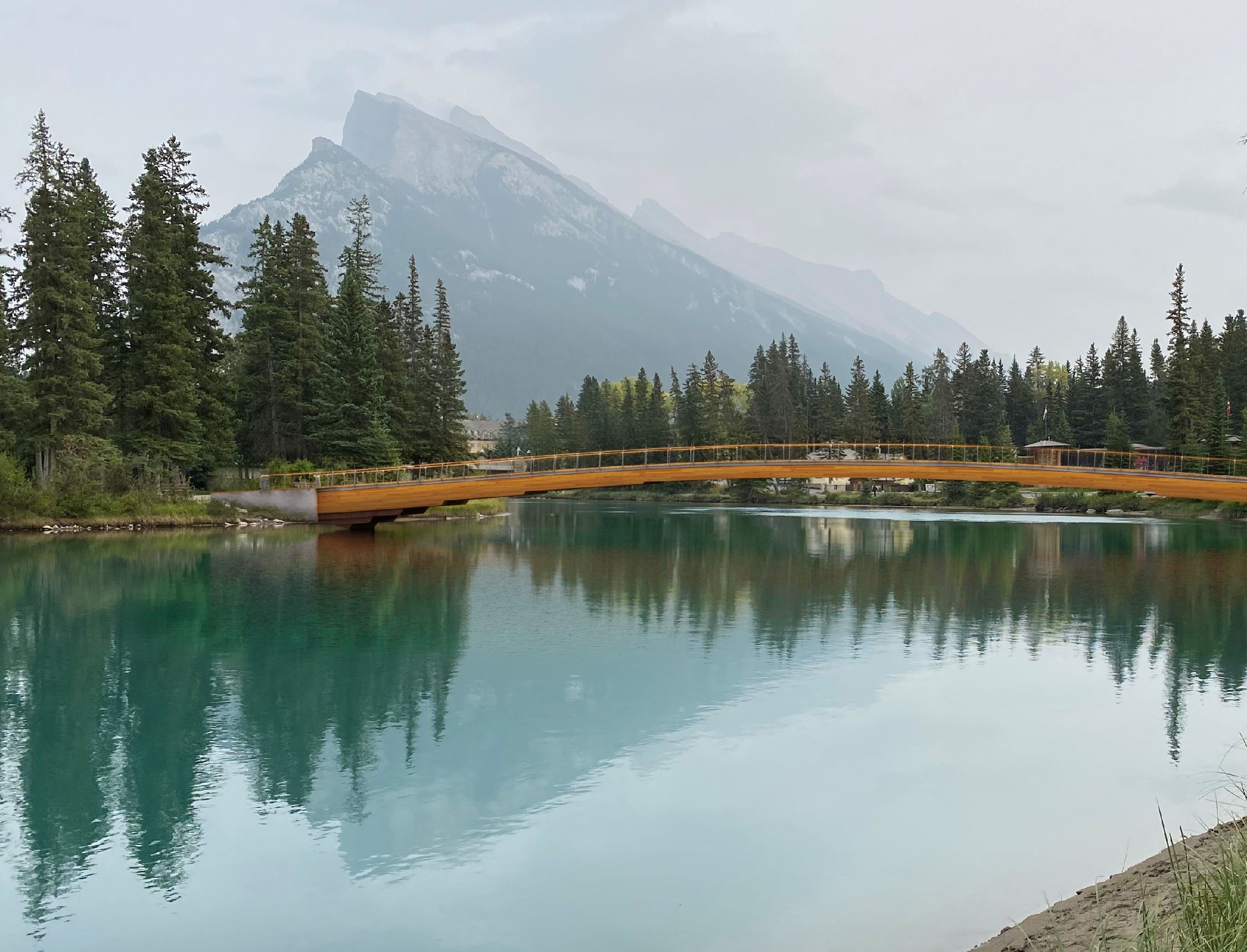 The Town of Banff announced that the Nancy Pauw Bridge officially opened, creating a new crossing over the Bow River that will help reduce vehicle use and promote active modes of transportation in the heart of Canada’s first national park.

Named for local philanthropist Nancy Pauw, the bridge was made possible through funding from the Wim & Nancy Pauw Foundation ($2.5 million), the Government of Canada ($2.2 million), and the Town of Banff ($800,000). The wooden structure spanning the iconic river will provide a convenient and environmentally friendly route between Banff’s downtown and southside neighbourhoods, as well as connecting Banff’s Central Park to the recreation grounds and the nearby Cave & Basin National Historic Site. The bridge provides connections to the trails on either side of the river in this UNESCO World Heritage Site.

“We are thrilled this long-awaited bridge will now provide a safe route for year-round commuters, while helping to take vehicles off the roads. By using the bridge, visitors and residents will contribute to reducing greenhouse gas emissions, maintaining our clean mountain air, and promoting active lifestyles,” said Banff Mayor Corrie DiManno. “We are grateful to the Wim & Nancy Pauw Foundation and the Government of Canada for their investment in a community connector fitting of our national park’s values of environmental protection and fostering the behaviours that promote long-term sustainability.”

The Pauw Foundation’s $2.5 million donation is their first contribution to an infrastructure project, adding to their investment of more than $1 million each year this decade in support to Bow Valley community programs.

“The bridge celebrates Nancy and her passionate support of active lifestyles and human-powered adventures, whether cycling, walking, running, climbing, or paddling…  all made even more special in beautiful Banff,” said Cathy Geisler, Executive Director of the Wim & Nancy Pauw Foundation. “We are fortunate that Wim has chosen to donate the profits earned from his successful hospitality venture at the Banff Lodging Company, towards programs and resources that benefit the visitors and people in our community.”

The bridge provides a valuable “last mile” connection with Roam Public Transit and is expected to see 5,000-8,000 crossings per day during the peak summer months and eliminate more than 3,000 vehicle trips across the river, reducing traffic congestion and promoting active modes of transportation.

“The Government of Canada recognizes that safe and effective transportation networks across Alberta are essential to build healthier and more resilient communities,” said the  Randy Boissonnault, Minister of Tourism and Associate Minister of Finance. “With today’s announcement, residents and visitors alike can now benefit from a new pedestrian and cyclist bridge that will provide a quick, convenient and environmentally friendly route between downtown Banff and surrounding neighbourhoods. This new infrastructure will help enhance transit connectivity while also encouraging people to use greener and more active means of transportation.”

A bridge at this location was identified as a need for the community more than 80 years ago to complement the Town’s only vehicle bridge, built in 1921. The other pedestrian bridge, located off Muskrat Street, opened in 2013.