The City of Kamloops announced the official completion of the Canada Games Aquatic Centre Infrastructure Improvement Project at the Tournament Capital Centre.

The $13.5 million project received $1,370,328 from the Government of Canada’s Investing in Canada Infrastructure Program and $1,141,825 from the Province of British Columbia through the CleanBC Communities Fund Program to support energy efficiency upgrades. It is the first project funded by this grant to be completed.

“As a swimmer and lover of aquatic sports, I’m pleased that the Canada Games Aquatic Centre in Kamloops will not only support healthy lifestyles, but will also reduce its carbon footprint and contribute to a greener and more active future for generations to come,” said Catherine McKenna, Minister of Infrastructure and Communities.

For example, the large air handler at the back of the building now regulates the temperature and humidity of the air within the pool building, and uses a heat recovery system to offset the need to burn natural gas to meet the thermal demands of the building. In a pool environment, a large component of the facility’s energy use is to heat the water. This heat constantly evaporates off the water creating humidity that is then expelled from the building. With the new HVAC systems, this relatively hot and humid exhaust air is now recovered and used to warm the new air entering the building. 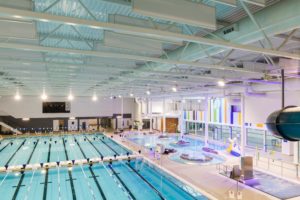 With the new HVAC systems, this relatively hot and humid exhaust air in the pool area is now recovered and used to warm the new air entering the building.

In addition, sustainable practices were prioritized during construction resulting in 97 per cent of construction waste being diverted from the landfill. 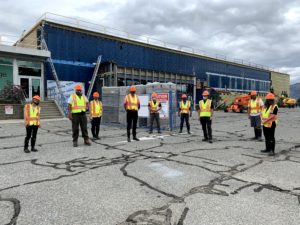 “Since becoming a BC Climate Action Charter signatory in 2007, the City of Kamloops pledged to significantly reduce both corporate and community-wide greenhouse gas emissions. This project is a big step toward that goal,” said Ken Christian, Mayor of the City of Kamloops. “We’d like to thank the provincial and federal governments for supporting our vision of reducing our impact on the environment. It’s important for all levels of government to work together to mitigate and adapt to the impacts of climate change.”

The facility is now open to the general public.