After a 16-month competition, SaskPower has selected Missouri-based Burns & McDonnell as the engineering, procurement and construction contractor to lead the construction of the Great Plains Power Station in the Moose Jaw Agri-Food Industrial Park in Saskatchewan.

“This is another important step toward the Great Plains Power Station becoming a reality,” said Mike Marsh, president and CEO of SaskPower. “Natural gas generation provides an affordable supply of baseload power that will support the integration of renewables such as wind and solar into our grid. This will be crucial as we work to reduce greenhouse gas emissions by 40 per cent below 2005 levels by 2030, and to make even deeper cuts beyond 2030.”

The project will consist of building a new natural 350-megawatt (MW) gas plant in Moose Jaw’s industrial park. The new power station will provide enough power for about 350,000 homes, be the same size as Chinook Power Station near Swift Current, and will support renewable generation and coal retirements.

The project is expect to employ up to 500 workers on the site during peak construction times, and is expected to provide a significant amount of work for local and Indigenous businesses.

“On this project, SaskPower is working to exceed the already strong local and Indigenous engagement and employment efforts achieved with Chinook Power Station,” said Don Morgan, the minister responsible for SaskPower. “As part of their proposal, Burns & McDonnell reached out to over 300 Saskatchewan companies to discuss how they could participate in this important work, and engagement efforts will continue as the project develops.” 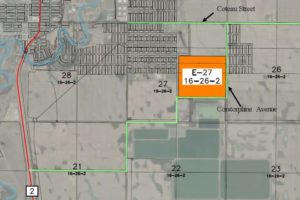 SaskPower’s proposed construction of roads in the Agri-Food Industrial Park is highlighted by the green line. Additional roads could also be built once light and heavy vehicle traffic routes are known. Photo courtesy City of Moose Jaw.

There will be opportunities to meet early next year to discuss construction details including: traffic and roads, impacts to neighbours, environment issues, noise and air emissions, and, local and Indigenous participation.