“With the North warming significantly faster than the rest of Canada, the longstanding reality of significant infrastructure deficits is now even more exacerbated. Canada cannot afford the severe consequences of the North remaining unprepared for the infrastructure costs of climate change,” said Tosh Southwick, owner of IRP consulting, Kluane First Nation citizen, Canadian Climate Institute Board member, and Yukoner.

“Infrastructure investments in the North will be essential to Canada’s overall success in adapting  to climate change,” added Ryan Ness, adaptation research director, Canadian Climate Institute. “Northern communities should be supported in supplying their knowledge, leadership, and ingenuity to plan, design, and build infrastructure that meets their needs. The importance of adaptation in the North and the empowerment of Northerners should be highlighted in Canada’s forthcoming National Adaptation Strategy.”

Due North provides new analysis on the costs of permafrost thaw damage to paved roads, runways, and buildings, including the first permafrost thaw projections for the entire North. It also examines the impacts of warming temperatures on the future viability of winter roads. In recognition of the importance of understanding the experiences of those who are already living through climate change in the North, the report presents first-hand accounts of the social and cultural impacts of climate-related infrastructure failure and disrepair through interviews with Northerners in six communities. 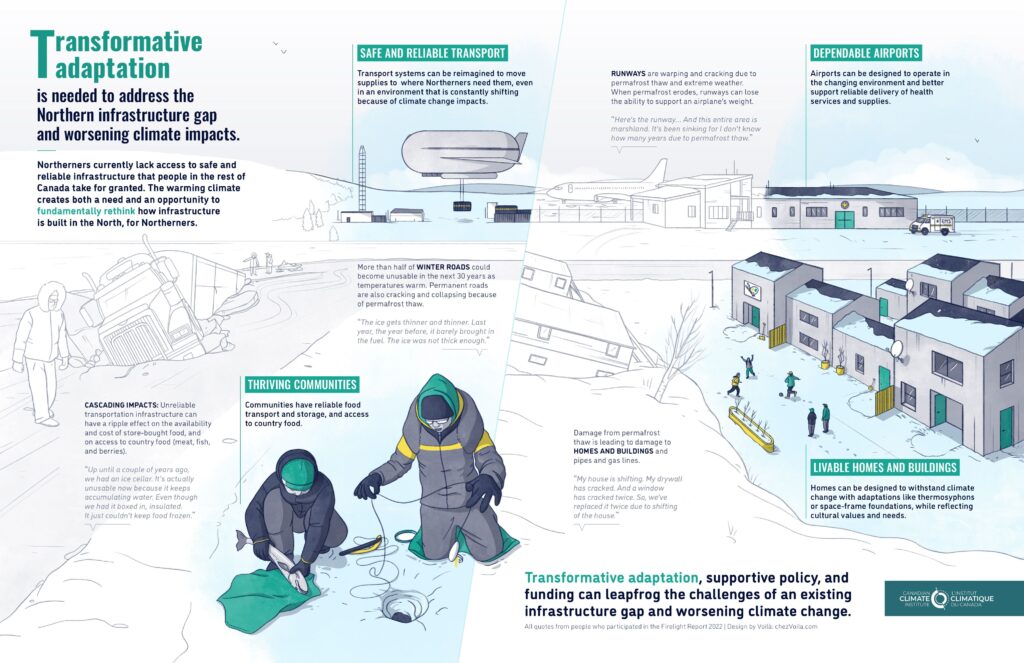 Due North finds that early and ongoing investments in infrastructure adaptation can substantially reduce costs and protect communities. For example:

“Poor infrastructure is not an inevitability of Northern living: it’s a choice that Canada has repeatedly made,” said Dylan Clark, senior research associate, Canadian Climate Institute. “Many other countries with populated Northern regions like Greenland, Alaska, and Norway have made different choices and do not face the double-barrelled problem of an existing infrastructure gap meeting extreme climate warming. But it’s not too late to fix the infrastructure deficit, and the good news is that the right kinds of investments today will save money and sustain Northern lives and livelihoods in the long run.”