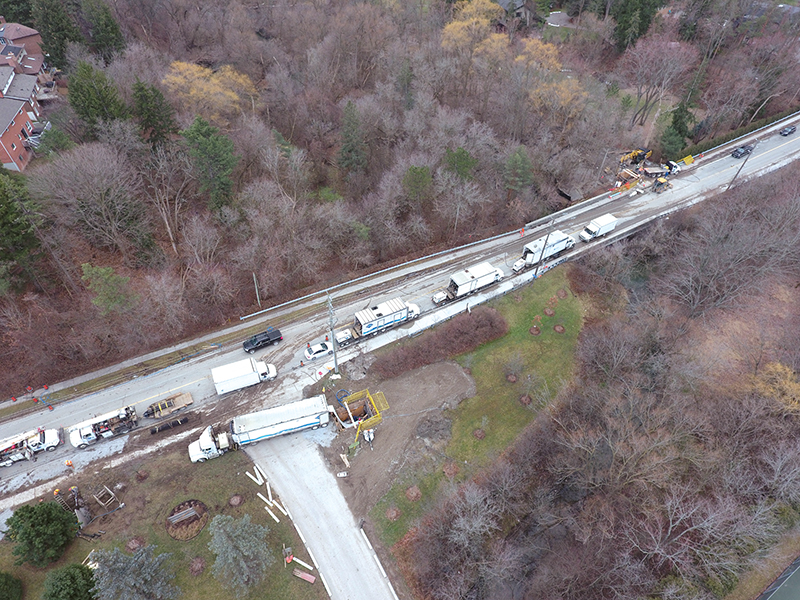 Solutions coming down the pipe to help address asset renewal.

By Simran Chattha and Connie Vitello

The construction of water infrastructure across the country has accelerated in recent years. Canada’s latest Core Public Infrastructure Survey found that an average of approximately 13,000 kilometres of new linear water assets were built per year in 2017 and 2018, compared with around 6,000 kilometres per year from 2000 to 2016.

Open-cut trench excavation and trenchless rehabilitation, most often the cured-in-place pipe (CIPP) method, are among the methods that are commonly being used by municipalities. What are the benefits and drawbacks of these methods? What are the variables that should be used to select one method over another? Let’s explore these questions.

After watermains are put into service, their structural integrity and hydraulic performance will eventually start to deteriorate. Structural deterioration can be caused by a number of reasons. For example, metal-based pipes develop internal and external corrosion, causing the pipe walls to thin or degrade. This can, in turn, cause the watermain to eventually leak or bust.

One option is open-cut trench excavation, which is the traditional method that has been used for lateral sewer construction, repair, and replacement. This method involves excavating down to and exposing the existing pipe so that it can be repaired or replaced and then backfilled.

The advantages of using this method are that it can have a lower cost in unpaved areas compared to other methods, it can be used in cases where there is a collapsed or severely broken pipe, and there’s no need to remove roots or debris from the pipe.

However, there are also disadvantages of using this method. More excavation is required with this approach when compared to other methods. This option may also require the removal of street and sidewalk pavement, which increases repair expenses and creates inconvenience for the community.

Trenchless rehabilitation, particularly CIPP, can also be used to repair existing pipelines. It is a jointless, seamless pipe lining within an existing pipe. The process of CIPP involves inserting and running a felt lining into a pre-existing pipe that is the subject of repair. Resin within the liner is then exposed to a curing element to make it attach to the inner walls of the pipe. Once fully cured, the lining acts as a new pipeline.

A major advantage of this method is that it doesn’t require excavation. The disadvantages can include the need to make sure the liner size needed is available for a particular pipe (when not a common size) and the need to facilitate a bypass of the flow in the existing pipeline while the liner is being installed. It is also considered by some as more of a temporary fix than a long-term replacement method. However, others report that certain CIPP projects can provide an additional 100 years of life.

Patrick McManus is executive director of the Ontario Sewer & Watermain Contractors Association (OSWCA), which represents over 750 companies across Ontario, including contractors, manufacturers, distributors, and consulting engineers. They collectively perform over $1 billion a year in capital projects to ensure safe drinking water and environmentally responsible wastewater treatment and disposal.

According to McManus, typically, open cut and tunnelling are the preferred options. “Pipe relining is a relatively new offering and becoming much more widely used but still considered to be a niche,” said McManus. “It’s another tool in the toolbox that temporarily provides more life for already buried infrastructure with minimal disruption and excavation.”

However, deciding on the best option for a particular municipality really depends on the objective and circumstances of that municipality, stated McManus.

“This is not an either-or decision,” said Stewart Dickson, director of conveyance with WSP in Thornhill, Ontario. “Rehabilitation and replacement are both valuable methods of pipeline renewal that can be implemented, independently, or jointly.”

In Canada, there is currently a preference for open-cut as trenchless options are still mainly in the development and acceptance phase. Many of the projects today are still being led by designs favouring open-cut solutions. However, the consulting industry does evaluate trenchless proposals and is awarding alternative trenchless when it is evaluated to have the lowest total installed cost.

“There are various reasons that one option may be more desirable than another,” explained Dickson of WSP.

He advises his clients to consider the following:

Barry Kelly, a consultant with Assetic, an asset management software company, acknowledges that the decision-making process can be complicated and that it all depends on the project, and the balance of priorities involved.

“I’m seeing a trend that municipalities are getting better at looking beyond just that one project,” said Kelly. “They’re getting more information so they can make information-based decisions.”

He points to the big picture that includes transportation projects, other infrastructure projects, and factors such as the growth of that area, the age of, and the conditions of the pipes.

David Crowder, a senior associate at RV Anderson, also notes that there a number of variables that need to be balanced. “Several variables are reviewed when considering rehabilitation or replacement of a buried asset,” said Crowder. “This could include depth, diameter, age, water material, and watermain usage (industrial, residential, or hospital).”

“Depending on the diameter, pipe material, condition, and age of the watermain, we first consider what rehabilitation technologies are available to extend the life of the buried asset,” added Crowder. “We suggest that a desk top study be completed to determine if rehabilitation or open cut should be considered.”

Geoff Britnell, business development manager at FER-PAL Infrastructure, added that there are direct and indirect costs to consider. The direct costs have to do with the financial savings of the projects.

“The indirect costs are really what we’re talking about when it comes to variables,” said Britnell. “That’s every other impact that can come from the project that isn’t necessarily financial. It could be trees, disruption to a neighbourhood, disruption to traffic, and disruption to business.”

While there don’t seem to be any easy answers, there are certainly a few key variables to consider.

It comes down to dollars and cents, according to Gregory Baird, president of The Water Finance Research Foundation. “Open cut is more expensive with the traffic and road replacement. But a rehab many times may not be feasible,” said Baird.

Geography is also a key variable when deciding on project strategies. Regionally, a big inhibitor seems to be geological conditions and the lack of knowledge of subsurface conditions. When dealing with rock, it drives cost up for both the contractor and the customers. However, in places such as the Greater Toronto Area, there are not as many geographic challenges, and most owners and regulators are aware and accepting of trenchless technologies.

“Trenchless rehabilitation methods of non-structural cleaning and spray-on lining, structural lining, and non-structural pull-through liners have been used on occasion,” according to Jamie Hannam, director of engineering and information services for Halifax Water. “Conversely, trenchless CIPP is the predominant method utilized for gravity sewer rehabilitation versus open cut.”

The key variables Hannam considers when deciding between using an open-cut versus a trenchless method include: the total project cost, the effectiveness of the solution (i.e., whether it re-stablishes original design performance and estimated service life), and access to the infrastructure for construction (whether the pipe is accessible for open-cut). For example, pipes that are located under a highway or railway make trenchless solutions more enticing and affordable relative to open-cut options.

As environmental awareness increases, trenchless can be an attractive option. From no idling traffic to no cutting of trees, trenchless is becoming a more viable option as it is better understood. Along with this, the new methods of preparation and installation allow for less steps and complexity of the rehabilitation program.

Britnell of FER-PAL notes that trees in particular are an important consideration. A 100-year-old tree can’t be replaced so there’s a consideration about whether a project can use a method that will leave the tree intact.

“[Environmental considerations] haven’t necessarily played a strong role in the decision-making process yet, but I think it’s something we all recognize is coming relatively fast in the near future,” remarked Britnell. “That is, what is the environmental cost to do a project with open-cut versus CIPP or rehabilitation? A lot of it comes down to what’s above the watermain or utility you’re looking at replacing.”

ReNew Canada intends to take a closer look at this issue through a survey with environmental and engineering consultants across Canada to inquire about their current practices and opinions related to the management, design, and procurement of linear public sector water infrastructure in Canada. We will be reporting on the results in the next edition. Stay tuned.

The Road to Resilience

Low Carbon Countdown is On