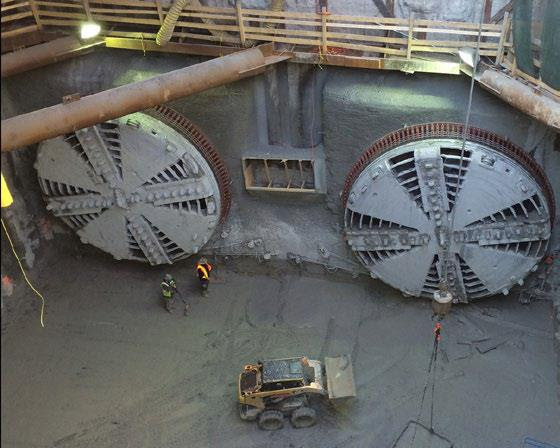 Another milestone was reached as the Ontario government and its key delivery partners, Infrastructure Ontario and Metrolinx, awarded a contract value of $729.2 million to West End Connectors to design, build and finance the tunnels for the Eglinton Crosstown West Extension (ECWE) project. Construction is expected to begin in the coming months.

The scope of work includes the design and construction of launch and extraction shafts, tunnels and headwalls, the installation of precast concrete tunnel liners, as well as other ancillary work. Construction is expected to commence in 2021, with expected completion in the second quarter of 2025.

The ECWE is the first phase of work for the 9.2-kilometre extension of the Eglinton Crosstown Light Rail Transit (LRT). The extension will run primarily underground and westward from the future Mount Dennis Station between Weston Road and Black Creek Drive, to Renforth Drive. The system will connect to the GO Kitchener Line and Union-Pearson (UP) Express at Mount Dennis Station, TTC bus services in Toronto, as well as GO and MiWay bus services.

Earlier this year, West End Connectors was identified as the First Negotiations Proponent and has been busy on with some early design work. Now that the tunnelling contract is finalized, they’re ready to begin work at the tunnel launch site at Renforth Drive and Commerce Boulevard.

According to Metrolinx, the tunnel boring machines will launch at the Renforth site and dig the underground section between Renforth Drive and Scarlett Road. To get the launch site ready for the arrival of the machines early next year, West End Connectors will carry out some utility works, conduct site surveys, and start setting up monitoring equipment for environmental testing. They’ll also be building an access road and mobilizing two rigs to start building the launch shaft.

While work is moving quickly to get the tunnel boring machines in the ground at Renforth, construction between Martin Grove Road and Scarlett Road is expected to start in spring 2022. As these plans move forward, the Eglinton Crosstown West Extension team will keep the public informed along the way. And the community will even have a chance to weigh in on a name for the tunnel boring machine later this year.

Featured image: Set against the size of the workers, here’s how big elements of the tunnel boring machine equipment can be. (Metrolinx photo)