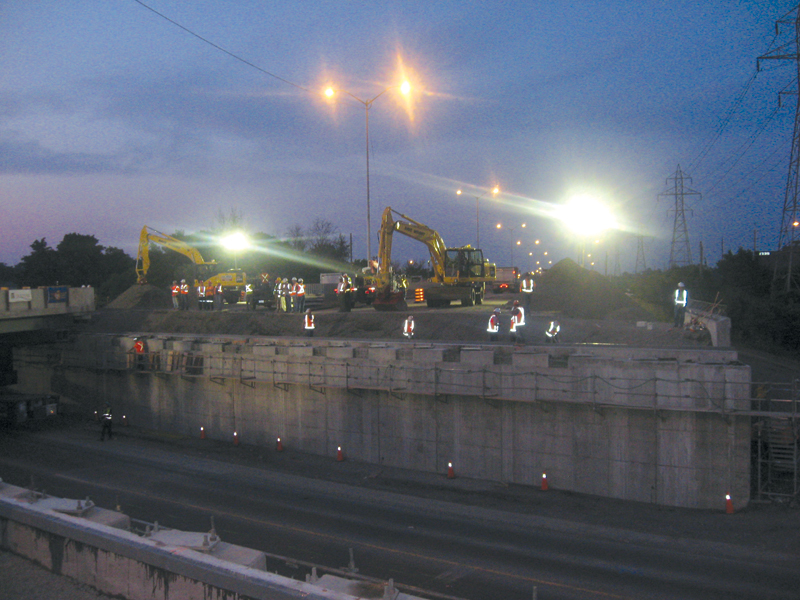 If you haven’t heard of rapid bridge replacement (RBR), it’s time you did. This state-of-the-art process allows bridges to be replaced in a matter of hours instead of months or years, where the old bridge is lifted out and away, and is replaced with a new one constructed nearby. This method reduces overall project costs, improves site safety, lessens the environmental impact, and, of course, minimizes traffic disruption.

The decision to use RBR depends on factors like the design and size of the existing bridge, as well as whether there is a nearby site available to build the new one.

RBR is most beneficial where there are high volumes of traffic. “In the right setting, the benefit to roadway users is self-evident,” explains Bob Nichols, a spokesperson for the Ontario Ministry of Transportation (MTO). Avoiding traffic snarls obviously helps commerce flow smoothly, but it also has a positive environmental benefit. “For the Island Park Bridge Replacement in Ottawa in 2007, RBR was estimated to have saved the equivalent of 150 tonnes of gasoline and associated emissions by avoiding delays,” Nichols notes.

While it’s generally more expensive than conventional bridge replacement due to the specialized mobilization equipment required, RBR helps avoid other costs. There is no need to have construction staging joints in the new bridge, nor to have traffic flow systems, such as temporary concrete barriers, lane markings, and flagging construction personnel. RBR also avoids lane and shoulder width reductions, which can slow highway traffic during conventional replacements.

Just how can we replace a major highway bridge in a matter of hours? First, a replacement superstructure is built at a nearby staging area on temporary supports. Then, components of the existing bridge are removed but temporarily fastened to the abutments, allowing the bridge to remain serviceable. In the next step, the existing abutments are modified to accommodate the new bridge.

Finally, the replacement begins. Traffic is detoured to another bridge. At the site of the replacement, self-propelled modular transporters (SPMTs) move underneath the old bridge, lift it off its supports, and transport it to another location where it will be demolished and recycled. “The SPMTs then lift the newly built bridge superstructure off the temporary supports, transport it to its final position on the roadway, and lower it onto the permanent supports,” Nichols says. The new bridge is connected to the existing substructure and the bridge deck is tied in to the roadway at each end of the bridge.

Nichols says nobody—not even his MTO colleagues—knows of RBR projects in other provinces that have employed SPMTs. “Ontario is on the leading edge in the use of this technology,” he says. Similar to SPMTs, but more restrictive, is a method called jack and slide, used across the country for RBR rail bridges, and in British Columbia and Ontario for RBR highway bridges. With this method, the new bridge is constructed immediately adjacent to the existing bridge, so it can be slid into place.

To use either SPMTs or jack and slide, bridge projects require specialized equipment. Each SPMT consists of two to four axles, with wheels that can turn 360 degrees and raise and lower by 0.6 metres. Each axle can lift up to 35 tonnes. Use is coordinated through a computerized control system that moves extremely heavy objects, similar to the technology used to move NASA’s space shuttles. In the replacement of the Bridgeland Avenue overpass in Toronto in November 2012, a 48-axle SPMT vehicle lifted the 750-tonne replacement bridge into place. On the other hand, jack and slide requires the use of a series of temporary sliding bearings (either greased Teflon bearings on stainless steel or roller bearings) on a track. With this technology, the bridge can be moved using jacks with a capacity to lift only five per cent of the weight of the bridge.

Put on a show

During the August long weekend in 2010, MTO tackled a much larger RBR project. Over 51 hours, the Aberdeen Bridge on Highway 403 near Hamilton became the first multi-span RBR in North America. Mostly because of the high traffic volume of the bridge, MTO communicated with the public about the progress using Twitter and a live video feed online. The ministry also created a viewing area to allow interested spectators to view the site from a safe distance. A year later, MTO used RBR on the Carling Avenue Eastbound Bridge on Highway 417 in Ottawa, and in October 2012, it tackled the Hwy 401 Bridgeland Avenue off-ramp in Toronto.

The MTO has also employed RBR on rural, low-traffic bridges over the last few years, the first being the Bass Lake Bridge near Sault Ste. Marie in October 2009. Careful community consultation was held at every stage, especially with the nearby Thessalon First Nation. The new bridge was an all-steel structure, installed in four hours with a total road closure of 12 hours. The environmental impact was minimal because RBR required no in-water work. And because of the new bridge’s structure, future refurbishment will be simple—it can be removed for repairs and replaced. The MTO estimates that with all labour, materials, and traffic control costs included, the RBR option totalled just under $145,000, about one-tenth of the conventional estimate of $1.3 million.

MTO has completed 12 RBR projects to date. The MTO states that with thousands of municipally owned low-volume road bridges across Ontario, a wider adoption of prefabricated bridge technology has the potential to save millions, in addition to improving service to rural citizens and the environment.

What’s Right for You?

When asked what a municipality interested in RBR should do first, Nichols advises hiring a consulting engineering firm to do a feasibility study. “If the municipality approaches MTO for advice, the ministry would likely share what we have learned based on our experiences and offer advice to the extent appropriate,” he says. “However, the final decision should be based on rigorous engineering analysis performed by the consultant. The consultant may also approach a contractor specialized in the RBR technology to provide advice on constructability, equipment limitations, and work schedule, et cetera.” Next comes a design-and-contract package with a bid invitation. Nichols adds: “It would be advisable to pre-qualify the contractors and their specialized subcontractors based on their experience in this type of work.”