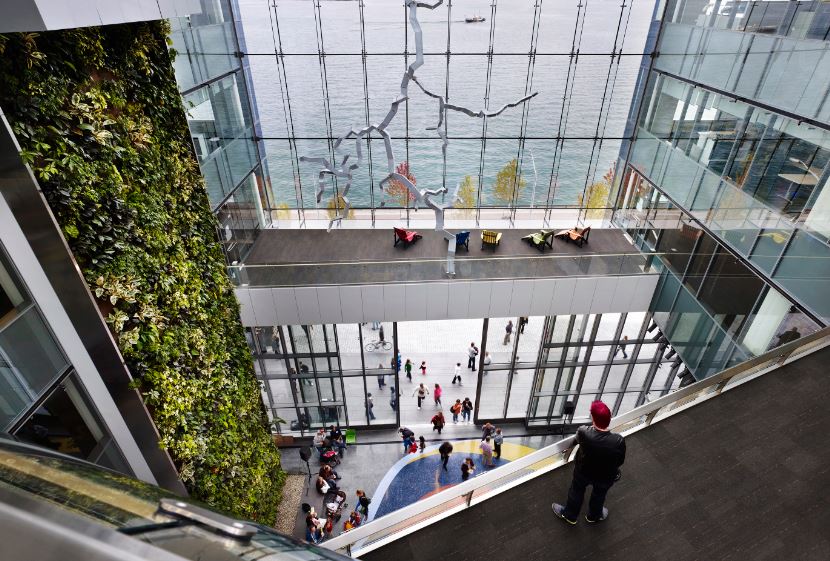 A growing body of research points to the fact that humans have a fundamental affinity for nature and, more importantly, that we need to be surrounded by natural environments to be mentally and physically healthy. This idea is called the biophilia hypothesis, and it was first described by E. O Wilson in the mid-1980s. It is the foundational theory of a great deal of research that now substantiates it. What we often describe as being merely aesthetic is turning out to be considerably more important than we had originally realized.

The biophilia hypothesis has fundamental underpinnings in our neurological and psychological characteristics that are still being worked out. Already, a substantive body of research during the past 25 years indicates humans are truly hardwired for regular interactions with nature, and that that if we incorporate more biophilic design elements into buildings and communities, we can create healthier, more productive environments.

Judith Heerwagen, one of the leading researchers in this field states that “improved moods and reduced stress are the most consistent benefits of nature contact across research studies […] contact with nature can be purely visual or multi-sensory, active engagement (walking, running, gardening), or passive (viewing only). Benefits are found in multiple settings, multiple cultures and across the age span, from early childhood to late adulthood.” The results from numerous studies comparing biophilic designs to more sterile living and working environments demonstrate the advantages of biophilic environments. These include improved stress recovery rates, lower blood pressure, improved cognitive functions, enhanced mental stamina and focus, elevated moods, decreased violence and criminal activity, and faster learning rates.

The goal of biophilic design, according to Stephen Kellert, a former professor at Yale University, is to create places imbued with positive emotional experiences—enjoyment, pleasure, interest, fascination, and wonder—that are the precursors to human attachment and caring for place. Biophilic environments, he has found, may be actualized through the use of three basic concepts: Nature in the Space, Natural Analogues, and Nature of the Space.

Nature in the Space refers to the incorporation of plants, water, and animals into the built environment. Examples include potted plants, water features, aquariums, and courtyard gardens, as well as a view to nature from within the building such as green roofs or parks. Natural features that incorporate movement, like the gentle swaying of grass or leaves in the wind, produce the strongest biophilic reactions within us because of their ability to attract our attention and because they are not erratic and do not change suddenly, both of which are more indicative of danger. Increased exposure to natural light also positively affects how our eyes function and improves our circadian rhythm which regulates our sleep cycles. Incandescent and fluorescent lights expose us to the wrong wavelengths of light at the wrong time of day, but LEDs now show promise in mimicking more of the benefits of natural light.

Natural Analogues may be described as being one degree of separation away from true nature. They involve the use of materials and patterns that evoke nature and are characterized by four broad types: representational artwork, ornamentation, biomorphic forms, and the use of natural materials. Building elements that mimic trees or shells and furniture with organic rather than geometric shapes are examples of natural analogues. Many patterns in nature follow an irregular, self-similar geometry called fractals. These occur everywhere in nature from coastlines and leaf patterns to the structure of river valleys and our lungs.

Nature of the Space refers to the way humans respond to different spatial configurations. Research indicates humans have an innate preference for open spaces and savannah-like settings with moderate to high depth and openness. Consider how condominium suites with the highest value are those with the best views or that restaurant booths are always the first to fill up. People will pay up to 58 per cent more for a property with a view of water, and more than 127 per cent for a lakefront property, according to Bill Browning in the 2012 Terrapin Bright Green report The Economics of Biophilia. Numerous hedonic pricing studies demonstrate a significant increase in property values of residences under mature tree-lined streets or those in close proximity to parks relative to identical properties without these amenities.

The manner in which the presence or absence of biophilic elements manifests itself in our day-to-day lives and on the balance sheets of developers and building owners varies considerably. In commercial buildings, for example, investing in biophilic design elements—such as green roofs and walls, natural lighting, adjustable windows, high-quality air, and water features—can yield significant returns. The high relative cost of salaries indicates that even small increases in worker productivity and health may yield impressive bottom line results. Kellert says that in order to work most effectively, people need:

Browning says a typical company of 1,000 employees with an average cost per employee of $33.24 per hour could increase its profits by $3.9 million annually just by increasing its employee productivity by six per cent using biophilic design practices. Reducing employee turnover could save the company an additional $25,875 on average per person.

A study by Ihab Elzeyadi at the University of Oregon found that 10 per cent of employee absences can be attributed to architectural elements that did not connect to nature and that a person’s view was the primary predictor of absenteeism. Employees with better views, the study found, are more likely to spend more time at their desks. According to Statistics Canada, presenteeism costs Canadian employers an estimated 15 to 25 billion dollars annually. With presenteeism, employees are physically present, but due to a physical or emotional issue, they are distracted to the point of reduced productivity.

See also  What is the state of water on Canada's reserves?

Browning and his team at U.S.-based Terrapin Bright , a consulting and strategic planning group, have been conducting research over the past two years with neuroscientists and psychologists to identify physical reactions to different elements of biophilic design. He will be sharing some of his key findings at Grey to Green: A Conference on the Economics of Green Infrastructure – Designing for Health in Toronto from August 25 to 26.

At a community level, the potential for achieving savings from reduced crime and health-care costs may be enormous. The United States spends an estimated $300 billion on mental-health-related illness annually. This year, Green Roofs for Healthy Cities and the Ontario Parks Association are working with three communities, Vaughan, Oshawa, and London, through the Green Infrastructure Charrette Pilot Project, to redesign several of their neighborhoods for maximum living green infrastructure. With the support of the Metcalf Foundation, they are also producing a cost-benefit analysis tailored to their local and regional environments for each design.

No matter at what scale it is applied, the emergence of biophilic design theory and practice suggests that integration of vegetative technologies into our buildings and communities will not only help manage stormwater, reduce the urban heat island effect, and clean the air, it will allow citizens to live healthier mental and physical lives.

Just close your eyes for a moment—and imagine the possibilities.

Steven Peck is the founder and president of Green Roofs for Healthy Cities and the chair of the Green Infrastructure Ontario Coalition.