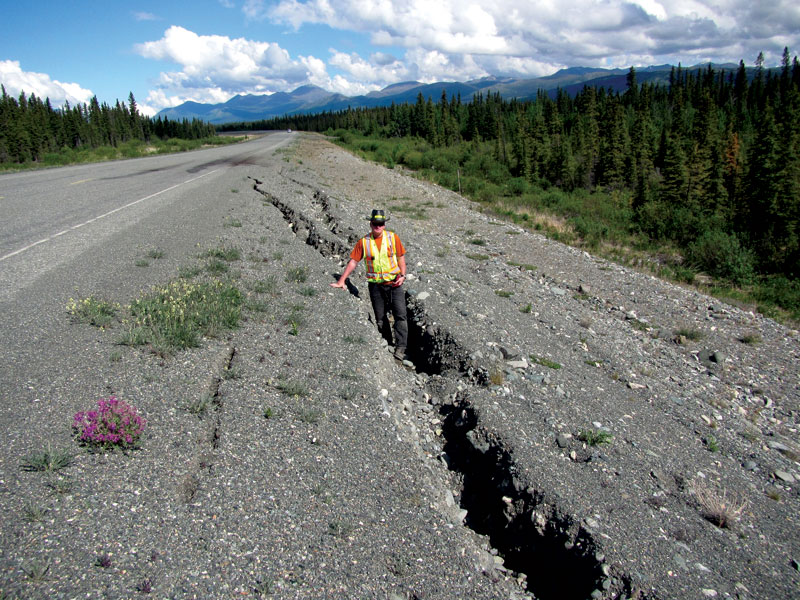 In the Yukon, the territorial government takes the possibility of climate change seriously because even the slightest temperature increase above freezing can change everything. The region’s roads and buildings are built on permafrost—the always-frozen layer of ice, soil, and rocks lurking below the ground’s surface. There is a world of engineering difference between 0 and 1°C, and even a single-degree shift can affect permafrost stability.

Temperatures are edging upward in the Yukon. And as the environment gets warmer, the very foundation upon which the the territory’s infrastructure is built on gets weaker.

“When temperatures get warmer on a year-by-year basis, the top of the permafrost descends lower into the ground,” explained Paul Murchison, director of the Yukon Highways and Public Works’ transportation engineering branch. “This can seriously affect roadways that have been built directly on top of what was frozen ground. You can have a new road that was level and solid when it was built turn into a heaved, cracked stretch of rolling road just a year later.”

The impact of melting permafrost has already affected the small settlement of Ross River (population 313). The local school had to undergo $2 million in structural repairs after its walls cracked and structure shifted when the frozen ground beneath the
building thawed.

“We had to increase insulation under the building to reduce the amount of radiated heat going into the ground below, and install a thermosiphon system to pull heat from the soil to ensure it stays frozen,” said Scott Milton, the Yukon’s director of realty and capital asset planning. “We are now keeping a close eye on the school, to ensure that these repairs were sufficient.”

Problems posed by change
It may seem counter-intuitive, but climate change—whether man made, naturally occurring, or a combination of both—doesn’t necessarily mean all parts of Canada will become warmer. A planetary warming trend can change weather patterns; this means a region that historically was heated by southerly winds can now be chilled by frigid air from further north.

Stuart Harris, a professor emeritus in the University of Calgary’s geography department, explained that, in fact, studies of ground temperatures in areas of permafrost show different effects from region to region. “Currently, the mean annual air temperatures along the Arctic coast and Mackenzie Valley are warming,” said Dr. Harris. “This is not necessarily the case in the mountainous interior where cold air drainage tends to buffer the changes.”

The result? “There is not a simple correspondence of trends in ground temperatures from place to place in northern Canada nor evidence of the extreme climatic changes predicted by some climatologists,” Harris said. “Nevertheless, the situation warrants close attention.”

This is especially true in areas where temperatures are going up. It isn’t just melting permafrost that poses challenges to northern planners: warmer winters mean that “ice roads”—winter highways built on frozen lakes, rivers, and swamps—are usable for shorter periods of time each year, if at all. There are thousands of kilometres of such roads in the Yukon and Northern Canada. They provide winter access to mines and remote communities that lack all-season conventional highways—and where the cost of building all-season roads is
cost prohibitive.

Climate change can also affect the North during the summer months. In 2012, a “perfect storm” of a 150-per-cent-larger-than normal winter snowpack—when temperatures are closer to freezing in winter, more precipitation occurs—plus heavy rains combined to seriously flood parts of the Yukon and Northwest Territories. “All three highways into Whitehorse were cut by flooding and mudslides,” Murchison said. “We had to rely on food being flown in to stock our grocery stores.”

No easy solution
An infrastructure engineer doesn’t have to believe in global warming to take climate change seriously in Canada’s North. From a planning perspective, what matters is that the assumed climactic conditions that defined the choice of building materials and structural designs may no longer hold—and not just in the North but across Canada as a whole.

“The problem is that we’ve only been keeping historical weather data in Canada for the past hundred years,” said Norman Kyle, the City of Regina’s director of roads and transportation. “As a result, we really don’t know if the increases in severe weather that we’ve experienced in recent years is truly due to an ongoing warming trend or not. Without that kind of conclusive data, we are hamstrung when it comes to infrastructure planning.”

The City of Calgary has adjusted its master transportation and infrastructure investment plans to take climate change into account. “The majority of our new transportation infrastructure spending over the next 10 years will be for public transit and transit-oriented developments around our light-rail transit stations,” said Eric MacNaughton, a City of Calgary transportation strategist. “This will reduce our dependence on cars and help reduce the growth of greenhouse-gas emissions.” Calgary has already experienced the kind of extreme weather events that are predicted to become more common in a warmer world, with the flood that caused the evacuation of approximately 100,000 people in 2013. According to City of Calgary Roads’ spokesperson Christopher McGeachy, this event has triggered changes to Calgary’s design standards and new processes to react to future emergencies and deal with the resulting infrastructure damage.

In theory, Northern Canadian communities could hedge their bets by rebuilding their infrastructure to cover all eventualities. In reality, this isn’t possible: “Trying to design northern facilities to protect against a large climatic warming—say, +4°C—is not feasible due to the high costs involved,” Harris said.

Faced with this reality, Northern Canadian communities are forced with taking a wait-and-see position on climate change, hoping against hope the problems they are experiencing are seasonal rather than part of an ongoing trend. At the same time, they are identifying options that can address problems—at least in the short term.

Thermosiphons are one such technology. This system uses a series of connected tanks and pipelines to pump enclosed fluid underground, where it can extract heat from the soil. The fluid is then returned via pipes to tanks above ground, where its heat is expelled into the atmosphere, or used like a heat pump to warm buildings. “We can also use thermosiphons to pump cold fluid below ground to reduce thawing,” Milton said.

Another solution is to construct horizontal air ducts into elevated roadways, so that cold winter air flows through the road and cools the permafrost, which helps to preserve it in the warmer months. “Since the highway acts like a heat sink due in part to the dark driving surface, we are looking at options that include reflective paint on applications, and light coloured pavements to reflect solar radiation and minimize permafrost warming,” Murchison said.

It remains to be seen how severely climate change will affect the Yukon and Canada’s North in the long term. In the meantime, “We are monitoring our infrastructure, and repairing buildings where required to address climate-induced problems,” Milton said. “It is all we can do at this point.”