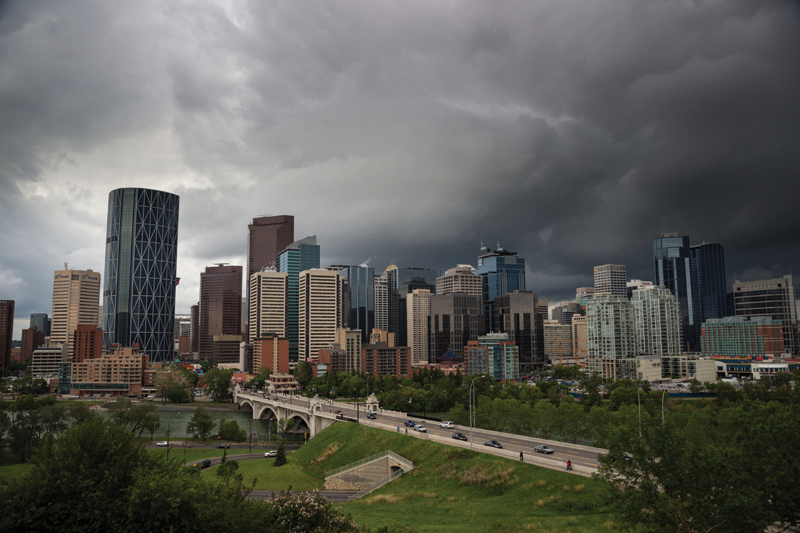 The term “extreme weather,” once confined to the domain of Discovery Channel docudramas, has in just a few short years become a regular headline in newspapers around the world. It’s not hard to see why: Hurricane Sandy in the Atlantic, blistering heat in Australia, a record-breaking and deadly typhoon in the Philippines, an ongoing state of drought emergency in California, and closer to home, epic flood events in Calgary and Toronto followed by a catastrophic series of ice storms. Extreme is the new normal and we are starting to wake up to the reality that extreme weather events threaten to erode the institutions and infrastructure that underpin our quality of life.

The cost of rebuilding after an extreme event can be significant. Add these costs up across the country and they are downright staggering. In 2011, the National Roundtable on the Environment and the Economy (NRTEE) predicted that, by 2020, climate change impacts could cost the Canadian economy up to one per cent of its gross domestic product (GDP)—or $5 billion per year—climbing to $43 billion per year by 2050. If 2013 is any indication, their predictions appear to be right on track. The Alberta flood alone is expected to cost upward of $6 billion, and according to the Insurance Bureau of Canada, 2013 was the most expensive year on record for insurable loses in Canada, with $3.2 billion in weather-related claims.

Beyond the costs of temporary disruptions of power, transportation, and other infrastructure services, extreme weather can have dangerously destabilizing effects on our economy. For example, the Toronto and Alberta floods have shed some light on what climate change might mean for the housing market, a key sector in Canada. As Blair Feltmate, chair of the Climate Change Adaptation Project (CCAP), explains, “The harsh reality is that if we don’t make an urgent push to weather-harden our infrastructure, climate change will drive us toward an uninsurable housing market in flood-prone communities across Canada—indeed, in certain markets, we have reached this point. De-risking Canada’s vulnerability to extreme weather should be a national imperative.”

If something positive can be said about recent extreme weather events, it’s that it’s starting to influence national, regional, and local conversations about infrastructure. Climate adaptation is a rising priority on the agendas of all levels of government, and the term “climate resilient” is coming into fashion among stakeholders involved in the planning, investment, construction, and management of Canada’s infrastructure. If nothing else, recent extreme weather events remind us that many infrastructure investments are once-in-a-generation decisions and that today’s demands—and costs—represent a small fraction of the lifetime value of any given project.

While major municipalities and senior levels of government seem to be waking up to the importance of adaptation, the challenge of moving away from the lowest-initial-cost model to a more holistic life-cycle costing model remains daunting. The priority going forward must be to establish and promote the return on investment (ROI) for climate resilience. For smaller municipalities, who are more vulnerable to extreme weather impacts and have fewer resources to plan for them, “management by disaster” is likely to remain the model going forward unless higher levels of government can create incentives to invest in de-risking their infrastructure assets.

The United States is moving in this direction by including climate resilience provisions in the recently announced $3.9-trillion federal budget plan. De-risking through resilience also figures prominently in the most recent Alberta budget, with almost $900 million earmarked for hardening communities against future flood events. While not specifically linked to climate change, the federal government also promotes life-cycle cost assessments as part of the new Building Canada Plan.

Less appreciated, it seems, is that the ROI on climate resilience investments can be huge. The figure generally quoted by emergency management organizations and other adaptation advocates is that every $1 invested in climate resilience returns $4 in avoided costs. In practice, this ratio may be much higher. CCAP, for example, is designing and testing simple climate adaptation infrastructure like bioswales—concrete ditches filled with rocks and plants that slow floodwater and help trap pollutants and silt. CCAP predicts these types of structures could yield 10 to 100 times the invested capital in avoided costs. In other words, a strategically placed $100,000 bioswale could mitigate between $1 million and $10 million in flood damage.

In addition to saving money, building for climate resilience could also be a boon for other sustainability objectives, like energy efficiency. Alex Wilson, founder of BuildingGreen and president of the Resilient Design Institute, is credited with coining the term “passive survivability”—a concept meant to draw attention to the vulnerability of buildings to extreme weather by pointing out how quickly many buildings become uninhabitable if the power goes out during a period of extreme cold or extreme heat. “Designing buildings so that they will maintain habitable temperatures in the event of lost power or interruptions in heating fuel is a win-win solution. Those buildings will be safer during emergencies, and they will save owners energy and money through normal operations,” Wilson says.

The climate resilience imperative compels us to consider energy efficiency not only for its environmental and economic benefits, but because it provides a low-cost measure of security in the face of extreme events. Energy efficient designs that leverage insulated shells, high thermal mass, and strategically placed windows to allow buildings to remain within habitable temperatures when the power fails are no-regrets solutions to both climate change mitigation and adaptation.

Integrating these types of design considerations with resilient utility infrastructure, such as distributed power generation and district heating and cooling systems, begins to lay the groundwork for creating resilient communities. For example, precast concrete geothermal sewer pipes are being used to capture heat from wastewater and provide a secure local, inexhaustible, and carbon-free supply of heat for district energy systems. Various configurations of these systems have already been installed in Canada, perhaps most notably at the False Creek Energy Centre in Vancouver.

Resilience is of course more than hardened infrastructure and clever technology and design. Resiliency means, in the words of the University of British Columbia’s National Municipal Adaptation Project, “supporting governance and infrastructure that are strategic and adaptive to environmental change, flexible in application, durable in change contexts, and responsive to regional economic, social, and environmental challenges.” In other words, resiliency can seem complex and intimidating. It is also urgent.

As the Hurricane Sandy Rebuilding Task Force has articulated so well, “No single solution or set of actions can anticipate every threat, but decision makers at all levels must recognize that climate change and the resulting increase in risks from extreme weather have eliminated the option of simply building back to outdated standards and expecting better outcomes after the next extreme event.”

With more than 70 per cent of Canadians already living in cities, municipally led resilience efforts are the key to the future of smart urban growth and the securing and enhancing of our quality of life in the future. As industries, professionals, and decision makers working in the infrastructure field, we have a collective responsibility to help chart the path to resilience. Together we must raise awareness about resilience and its importance and call on governments to invest in de-risking our vulnerability to climate change. At the same time, we must help map vulnerabilities and identify options and best practices for mitigation, work within the codes and standards process to ensure that resilience is a central consideration, and actively develop and support programs that incentivize resilient design and construction.