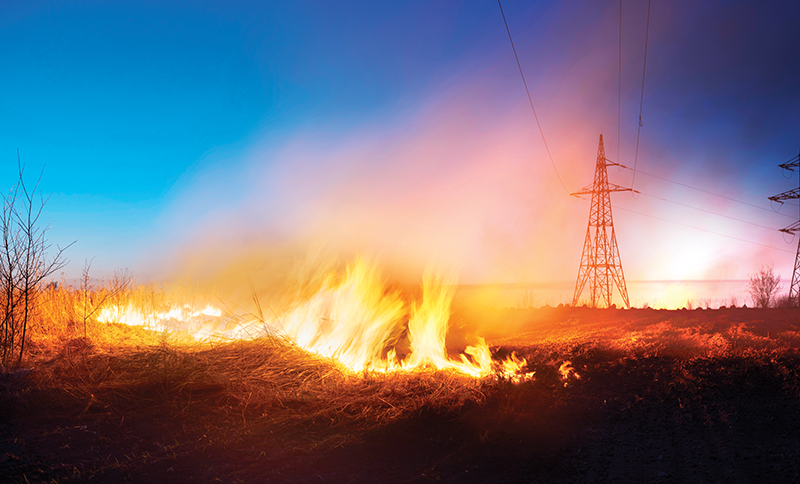 If you ask an electric utility professional about what is top of mind for them day-to-day, you will likely hear some combination of safety, security, sustainability, reliability and affordability in response. If you ask around enough, you will start to notice that this list will almost always begin with the word safety.

Safety is core to all that we do, and as part of this drive for safety Canadian Electricity Association (CEA) member companies strive to be global leaders in infrastructure maintenance. This is particularly important as climate change intensifies the risk and severity of wildfires and the potential for accidental ignitions from infrastructure increases.

As a case in point, a team that included experts from Natural Resources Canada (NRCan), recently released work identifying a significant increase in the geographical area burned by wildfires between 1959 and 2015 in Canada, and also observed a doubling in the number of large fires across the country. They also found that the country’s fire season got two weeks longer over this period, with fires now beginning approximately one week earlier and ending one week later.[i] Since 1990 these changes have become particularly acute. Utilizing data from the National Forestry Database, Figure 1 below shows the clear upwards trendline in the intensity of fires since 1990. 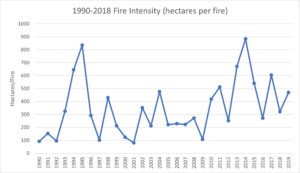 In response to this trend, and with safety as the focus, CEA recently led an initiative to develop a Utility Wildfire Mitigation Guide. The guide provides an inventory of best practices for Canadian electric utilities, with the goal of reducing or eliminating ignitions from electricity infrastructure and promoting the sector’s resilience to wildfires. Utilities world-wide have become all too aware of what is at stake.

For instance, the 2018 Camp Fire in California was linked to Pacific Gas & Electric owned transmission lines. Tragically, the fire resulted in over 80 deaths and destroyed nearly 19,000 properties. The Camp Fire reaffirmed the criticality of developing strategies to mitigate against this heightened risk environment.

The sector’s mitigation concerns do not end with wildfires. Climate change is also creating other threats to grid safety and reliability. For instance, floods and other severe weather events have been on the rise in Canada. Large events such as these, which are outside of the control of a utility are classified as Significant Events, i.e., events deemed catastrophic in nature.

In 2018 Significant Events exceeded 50,000,000 Customer-Hours of Interruptions (CHI), i.e., the accumulated duration of outage events. In 2019, Canada was hit with another 50,000,000 CHI. This marks the first consecutive years where CEA recorded over 50 million CHI since CEA started capturing major event data in 2003. Figure 2 illustrates consistent growth from 2015 to 2018 in this category.

Thus, while Canada’s over 80 per cent non-emitting generation capacity holds great promise in terms of enabling the clean electrification of the Canadian economy, ensuring that the infrastructure required to deliver this energy is adapted for the increasing effects of climate change introduces some significant challenges. Governments, regulators, industry, and other stakeholders must work together to ensure that while we move towards the grid of the future, we are also implementing the safety and climate mitigation measures that this future requires.

One clear role that CEA will play on behalf of the sector is building upon and encouraging strong partnerships with the federal government. Towards these ends, in 2017 NRCan partnered with CEA on a three-year project to develop climate adaptation planning guidelines for electricity companies in Canada. These guidelines are intended to serve as recommended processes for utilities to follow when developing company-specific climate adaptation plans.

Official publication of the climate adaptation guidelines is planned for fall 2020, and as part of this project, CEA has also held a series of workshops for electricity companies across Canada. These workshops facilitated hands-on understanding, interpretation, and application of the proposed guidelines. In total five workshops were delivered in various regions spanning the country.

However, more should be done to help ensure we are prepared for the future. Climate adaptation and mitigation will entail increased costs over current business practices, and governments and regulators should partner with industry to address this reality. For instance, in its 2020 Pre-Budget Submission, CEA called for a Federal Climate Adaptation Fund for electricity infrastructure. Such a fund could prove critical in offsetting the increased costs associated with mitigation and adaptation practices such as burying power lines and reinforcing electricity structures.

We can also look towards international jurisdictions facing similar issues. For instance, the Florida Public Service Commission (PSC) has moved to fast-track regulatory approval for storm-protection projects to prepare our grids as quickly as possible for the new risk environment.

The American National Oceanic and Atmospheric Administration (NOAA) now shares satellite data and assets with U.S. utilities during fire season to provide advanced warning of potential new fires. Such information and asset sharing agreements represent low-hanging fruit for wildfire mitigation and climate adaptation in Canada. Therefore, it would make sense for the Federal Government to consider developing a national task group that can work with the electricity sector to identify such opportunities.

Together we can help to build the grid of the future, all while ensuring that safety, security, sustainability, reliability and affordability remain top of mind.

Justin Crewson is director of transmission and distribution policy, Dan Gent is director of analytics and Shahrzad Simab is manager of climate change and clean energy for CEA.