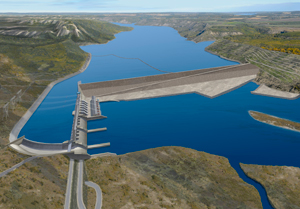 BC Hydro announced that it has signed a contract with ATB Riva Calzoni Hydro Canada Inc. to provide the hydromechanical equipment for the Site C project.

The scope of the contract includes the design, supply, and commissioning of all gates, hoists, and embedded parts associated with the generating station and spillways component of the project. Spillway and low level outlet gates are an important safety feature of the dam and act as a movable water barrier, controlling the amount of water that can be discharged from the reservoir.

ATB is an international that specializes in designing, manufacturing, and supplying hydromechanical equipment for hydroelectric projects all over the world. Having successfully worked on projects in Europe, Asia, and South America, ATB has now established operations in North America for their contract with the Site C project.

The contractor will mobilize to site in summer 2018 and work will be completed over a five-year period. The value of the contract is $68 million, which is included in the project budget.

BC Hydro is committed to following rigorous standards for all of its procurement activities. The competitive selection process undertaken for this contract was open, fair, and robust. The hydromechanical equipment supply contract was awarded following a comprehensive evaluation and due diligence process.