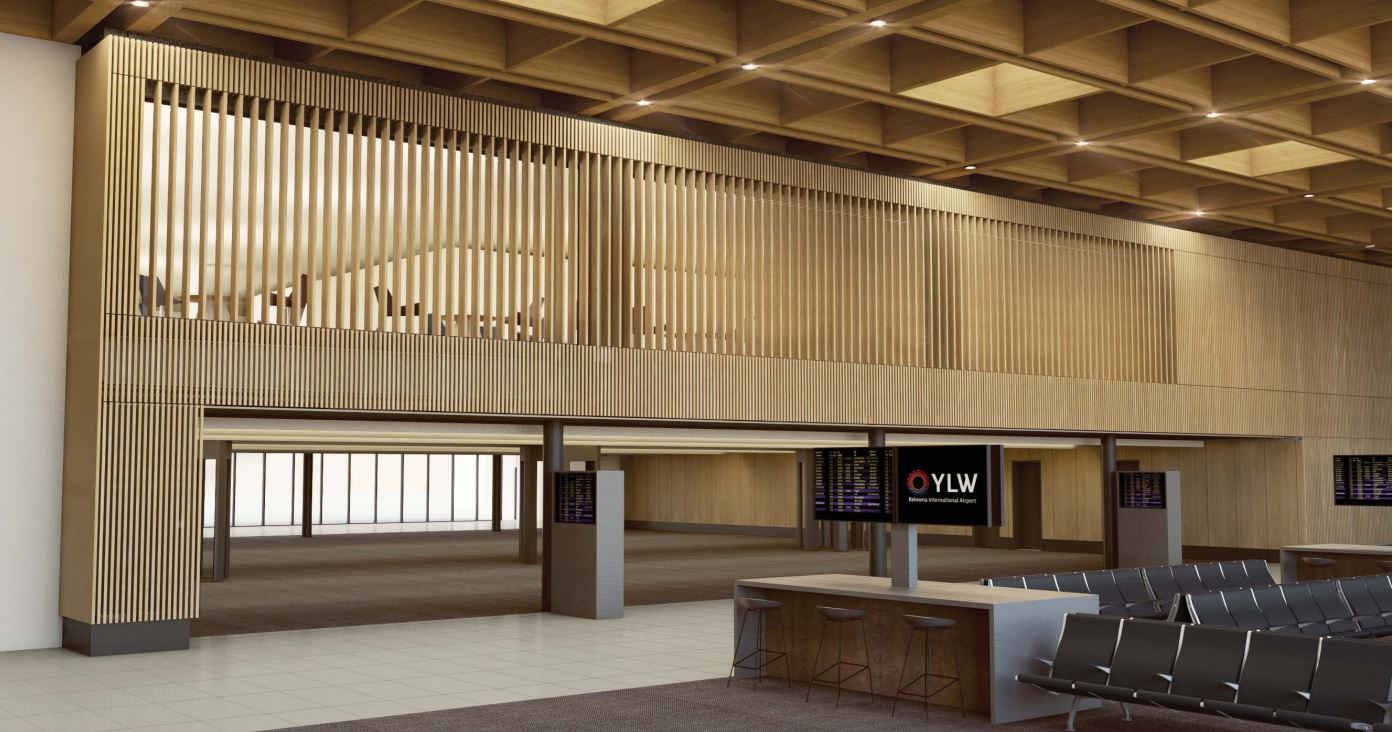 People travelling through the Kelowna International Airport (YLW) will benefit from an expansion and upgrade of the terminal, which will use mass timber through the province of British Columbia’s Mass Timber Demonstration Program.

The Airport Terminal Building Expansion project is anticipated to break ground in 2023 and will receive funding through the program, which has supported the advancement of mass timber in several projects throughout B.C.

“This project showcases what is possible when we promote innovation in the construction sector and support the development of mass timber in large infrastructure projects in B.C.,” said Ravi Kahlon, Minister of Jobs, Economic Recovery and Innovation. “This initiative will help the airport and region grow, while also aligning with a key goal of the StrongerBC Economic Plan to grow a clean economy that works for all British Columbians.”

The airport will receive $500,000 from the Province to help with costs associated with the use of mass timber, as well as the creation of a digital construction twin, advanced fire modelling and life-cycle assessment of building materials. The use of prefabricated mass-timber panels will reduce construction time and will result in less construction traffic to the site. Canada’s 10th largest airport will remain open and fully operational throughout the nearly 8,000-square-metre expansion.

“I’m thrilled to see that the terminal expansion will use mass timber, showcasing the versatility and design capabilities of B.C. lumber, while also contributing to the local economy. As YLW is the gateway to the Okanagan, the choice to use mass timber is an important decision to highlight the characteristics reflective of the region,” said Kelowna Mayor Colin Basran.

Building off the project at YLW and the success of the first two intakes of the Mass Timber Demonstration Program, the Province is also announcing an additional $2 million to open a third intake, which begins immediately.

“We’re excited to continue onward with the Mass Timber Demonstration Program,” said George Chow, Minister of State for Trade and chair of the Mass Timber Advisory Council. “This new intake will further advance B.C.’s mass-timber sector by continuing to grow B.C.’s position as a world leader in the field, while also building the knowledge and talent to keep driving the sector forward here at home.”

Individual projects can receive as much as $500,000 for incremental or one-time costs associated with design development, permitting and construction activities in mass-timber building construction. Expressions of interest will be accepted between July 11, 2022, and Oct. 7, 2022. Successful applicants will be notified by early 2023. The Mass Timber Demonstration Program is delivered by Forestry Innovation Investment on behalf of the Province.

“Growing B.C.’s mass timber sector is key part of our government’s vision for the future of forestry – a future where we get more value from every tree harvested,” said Katrine Conroy, Minister of Forests. “It’s great to see that mass timber will be a key feature in Kelowna International Airport’s expansion project and shows B.C. continues to lead the way on mass timber.”