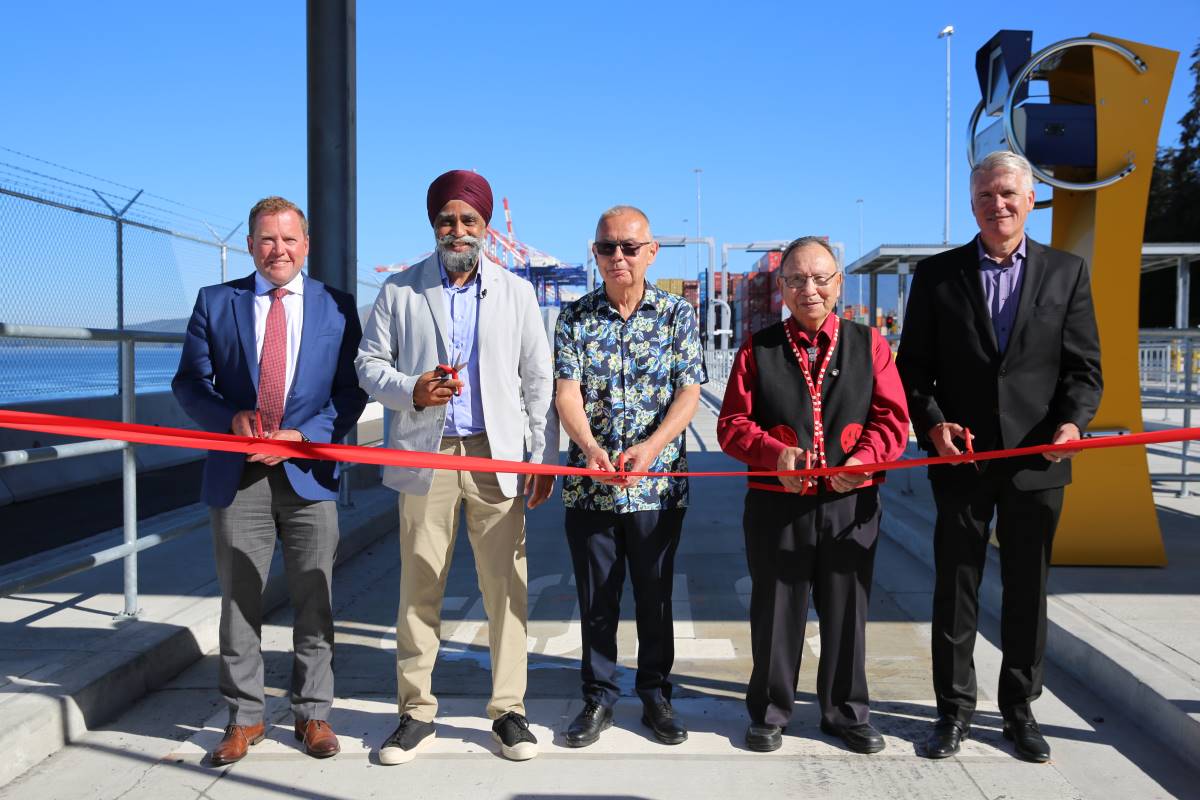 Testing on the route got underway in mid-August, with container truck traffic beginning to travel to the newly opened southern gate at DP World-Prince Rupert Fairview Container Terminal, and the Corridor is now fully operational . The private haul road and two additional rail sidings now in place enable greater efficiency and competitive advantages at the Port of Prince Rupert, while improving public safety and supporting PRPA’s carbon reduction strategy.

The Connector Corridor was developed by PRPA as a critical component of the Prince Rupert Gateway’s intermodal ecosystem, a closed loop system of road and rail infrastructure that connects transloading and marine terminal operations within the Port’s existing footprint. The road and rail corridor directly links Fairview Terminal, both current and future capacity, with future import and export logistics sites on South Kaien Island and Ridley Island, that will offer new opportunities for Canadian businesses to reach global markets through containerized trade.

Stretching around the southwestern edge of Kaien Island, the Connector Corridor shortens the distance trucks must travel from existing transloading sites in Prince Rupert and future facilities to Fairview Container Terminal. By steering drivers away from urban areas and onto PRPA-owned roads, the Connector Corridor will help cut commercial vehicles emissions by up to 75 percent and reduce truck traffic congestion in the city of Prince Rupert.

“The Fairview-Ridley Connector Corridor is a key example of the Prince Rupert Port Authority’s proactive approach to land use planning and is designed to maximize efficiency within the Port complex, simultaneously upholding our commitment to reduce the impacts of Gateway operations on the environment and surrounding community,” said Shaun Stevenson, president & CEO of the Prince Rupert Port Authority. “With the addition of this infrastructure, we can enable greater efficiencies and competitiveness at the Prince Rupert Gateway and generate new economic opportunities on local, regional, and national levels.”

In addition to supporting trade and environmental targets, the Fairview-Ridley Connector Corridor has provided significant benefit to local and Indigenous workers, subcontractors, and other stakeholders, as well as enabled local and Indigenous skills training and employment in the surrounding community and Pacific Northwest region. The construction was undertaken by the Coast Tsimshian Northern Contractors Alliance (CTNCA), a local First Nations joint venture led by Prince Rupert Lax Kw’alaams Band and Metlakatla First Nation. Contracts awarded to CTNCA for the project, as well as the related habitat compensation work in Seal Cove, totaled more than $135 million, the most significant in PRPA’s history. Most of the construction was completed during the pandemic and at the project’s peak 118 people, working three rotating shifts, preserved to complete the extensive in-fill work.

“CTNCA was honoured to be the contractor of choice on the Fairview-Ridley Connector Corridor and had the pleasure of working collaboratively with the Prince Rupert Port Authority to construct the nearly five-kilometre road and we are encouraged by the relationship we have created together,” said Metlakatla First Nation Chief Harold Leighton. “When PRPA uses Coast Tsimshian owned businesses, like CTNCA, they are helping to provide true economic, employment, and training opportunities to local and Indigenous workers which directly and positively impacts the First Nation communities and their members. We are hopeful the positive relationship that was built between PRPA and CTNCA through this project will continue long-term and in a significant way on other Port of Prince Rupert projects.”