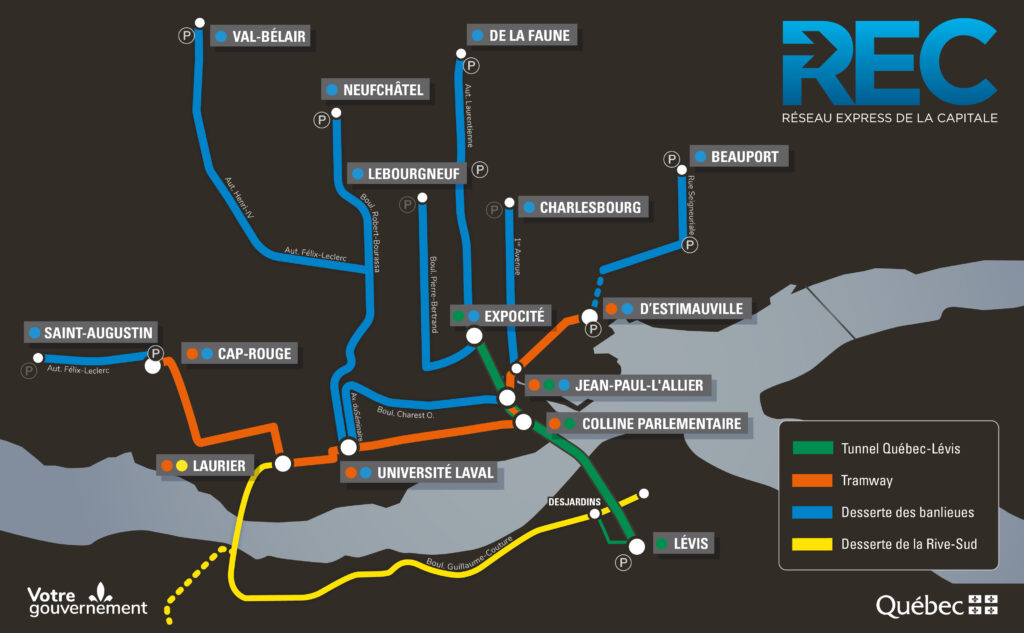 The Premier of Quebec, François Legault announced his government’s vision for public transit in the Quebec City metropolitan region, a vision based on a vast public transit  regional network, the Réseau express de la Capitale (REC). They also took the opportunity to unveil the details of the Quebec-Lévis tunnel, which will notably include a lane reserved for electric buses and the development of several public transport stations.

As part of the REC, the government of Quebec is banking on two axes of travel (north-south and east-west) and the complementarity of four major public transport projects that will be deployed in the territory of the metropolitan region of Quebec over a horizon ten years. By integrating these projects into a vast network like the REC, the government is putting forward a vision that will make it possible to optimize travel possibilities for the citizens of the region and to promote their use of public transit.

“A major catch-up had to be done in the greater Quebec City region in terms of public transit,” said Premier Legault. “This is what our government has been doing for two and a half years, and today, we are delivering the goods with our vision of the Réseau express de la Capitale. In addition, details of the Quebec-Lévis tunnel are confirmed today, a project that will include a major electrified public transport component in addition to finally making it possible to complete the loop of the regional road network. The tunnel will benefit all road users, including freight transport, for all of eastern Quebec.”

A major infrastructure that will benefit not only the region, but also all of eastern Quebec, the Quebec-Lévis tunnel will provide a direct link between the two city centers as well as better access to employment centers and large displacement generators. Travel times will be reduced and fluidity in the area of ​​the Pierre-Laporte and Quebec bridges will be improved. By closing the loop of the regional road network, the project will facilitate travel for road users and those using public transport. The transport of goods will also be considerably improved, since the new link will make it possible to cross the river further east, in particular via the Dufferin-Montmorency exit.

The tunnel will consist of a single tube with a diameter of 19.4 meters and its length will be approximately 8.3 kilometers. It will link the Jean-Lesage (20) highway, near the Monseigneur-Bourget road, to the Laurentian highway (973), at the Wilfrid-Hamel boulevard (ExpoCité sector), and it will include an exit to the Dufferin-Montmorency highway. The tunnel will have 3 lanes of 3.5 meters in each direction. These channels will be superimposed. Dynamic management of the tracks will be put in place to make it possible to adapt their allocation, if necessary.

The component devoted to public transport within the framework of this project is major and will constitute the axis of north-south movements of the REC. In addition to providing a lane reserved for electric buses in each direction, the tunnel will have connection stations: two will allow a connection with the Quebec City tramway (Parliament Hill and Jean-Paul-L’Allier stations), while the stations located at the north and south terminals will allow connections with the buses that will operate on the reserved lanes provided for in the projects to serve the suburbs of Quebec (towards Lebourgneuf or Charlesbourg ) and the South Shore (boulevard Guillaume-Couture).

The construction of the tunnel, whose construction cost is estimated between $ 6 billion and $ 7 billion, will be spread over a 10-year horizon and will soon be the subject of an official funding request from the federal government. As with all major infrastructure projects, the total cost includes the cost of construction plus reserves and other costs that cannot be more precisely known at the business case stage. At this stage of the project, the margin of uncertainty for these costs therefore remains high. The Ministry of Transport estimates that the amount associated with these reserves and costs will be between 10% and 35% of the construction cost.

Preparatory work will begin in 2022 and the business case is due to be finalized in 2025.

As the REC’s east-west travel axis, a tram line of nearly 20 kilometers will be built over the next few years in Quebec City. Its commissioning is scheduled for 2027. The government of Quebec has worked with the City of Quebec and independent experts to define an optimized route that will meet transport demand.

The tramway will begin its route to the west, in the Cap-Rouge sector , and will serve the Sainte-Foy sector , which includes major travel generators. It will continue its journey via Parliament Hill, a true focal point of the REC not only thanks to its connection to the Quebec-Lévis tunnel, but also to the Jean-Paul-L’Allier station, in the Saint-Roch sector . The route will end in the east, in the D’Estimauville sector, which includes Cégep Limoilou, the Enfant-Jésus hospital and the future Littoral Est innovation zone.

The sector located to the west, at the Le Gendre terminus , will be the subject of an innovation-oriented development that will be jointly planned by the City of Quebec and the Government of Quebec. The site, currently less densified, offers natural environments and significant development potential, in addition to sufficient space to accommodate the facilities of the maintenance and operation center of the tram.

The project benefits from an investment of $ 3.365 billion from the government of Quebec, the federal government and the City of Quebec.

Service to the suburbs of Quebec

Building on the complementarity of the various public transport projects in the metropolitan region of Quebec, the REC will integrate a major project of reserved lanes to better serve the suburbs of Quebec, increase the modal shift in favor of public transport and facilitate trips from the South Shore or towards it, via the Quebec-Lévis tunnel.

Deployed over more than 100 kilometers, these reserved lanes will target not only the main roads in the region, including the Félix-Leclerc, Henri-IV, Robert-Bourassa and Laurentienne highways, but also municipal roads such as Boulevard Pierre-Bertrand and the 1st Avenue.