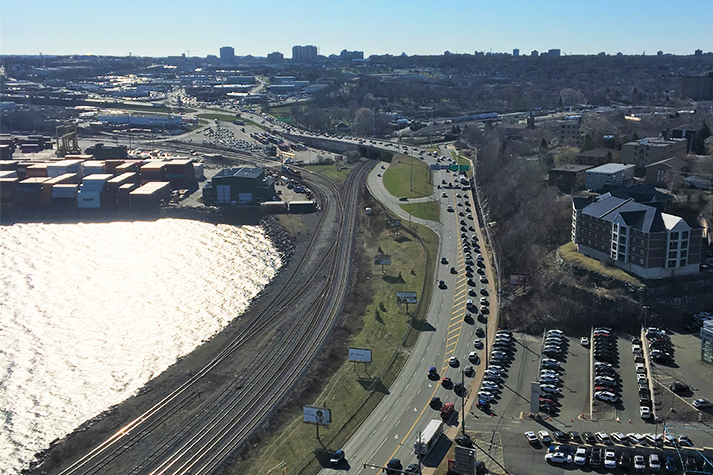 Recently, many Canadian municipalities have begun to reassess their roadways and corridors, with a view to making transportation more sustainable. Crucially, this process seeks to reduce the use of personal vehicles, in order to decrease greenhouse gas emissions and combat climate change. Promoting public transit use, as well as active transportation (AT) modes such as walking and cycling, is also a key factor, one which can generate tangible health and community benefits.

In this regard, in 2017 Nova Scotia’s largest urban region, Halifax Regional Municipality (HRM), adopted its Integrated Mobility Plan (IMP). The Plan set out a new approach for how people move throughout the region.

An important goal was the promotion of a “modal shift” away from personal vehicles, and toward more sustainable, active modes of transportation. To favour these, the IMP also established targets to increase the number of trips completed through AT modes and public transit.

Bedford Highway was the first strategic corridor HRM identified for its IMP process. This twelve-kilometre urban artery is one of the most important transportation corridors in the region. Historically, the Highway has been very car-centric and has lacked a clear vision for its look, feel, and function.

The Bedford Highway Functional Plan sought to change that. This comprehensive transportation and land use corridor study was intended to develop a long-term vision and improvements for this artery, so it could better serve all modes of transportation and types of travellers.

In 2018, (HRM) retained Englobe to complete the Functional Plan. Englobe, a consulting engineering and environmental firm with a pan-Canadian presence, led the project team as prime consultant, with support from UPLAND and IBI Group.

The Englobe team included experts in urban transportation design and urban planning, who worked closely with HRM staff to deliver the long-term transportation and land use vision for Bedford Highway. Most of the design work was completed in Englobe’s Fredericton and Saint John offices.

A key challenge of the project was the constrained right-of-way, which restricted the corridor’s ability to accommodate all travel modes. Extensive analysis was required to select the preferred configuration and demonstrate the decision-making process to the project’s stakeholders and the general public.

“Our team used an emerging tool called ‘multi-modal level of service’ analysis to assess the corridor’s overall performance,” said Peter Allaby, Englobe Vice-President, Operations for Atlantic Canada. “This tool helped us identify and prioritize certain design features in line with HRM policy. This was the first time this tool had been applied on this scale in Atlantic Canada.”

Early in the process, the Englobe team determined that an extensive public engagement program was integral to the project’s success. The team therefore launched a series of consultations with the general public, community advocacy groups and technical stakeholders to determine the best way forward. Roughly 1,200 people participated in public surveys throughout the project.

The Englobe project team also hosted multiple meetings with community advocacy groups, including the Halifax Cycling Coalition, Bicycle Nova Scotia, Walk and Roll Halifax, and the Ecology Action Centre. These groups provided direct input on the designs, with emphasis on safety for vulnerable road users as well as sustainable mobility.

The public engagement sessions were equally productive and positively received. “These sessions were very successful in terms of building consensus and community support for the final recommendations and designs,” Peter said.

A new vision for Bedford Highway

Following these crucial steps, Englobe delivered the finalized Functional Plan in December 2019. In May 2020, HRM Council unanimously endorsed its staff’s recommendation to advance the design toward the implementation phase.

Englobe’s recommended corridor plan reimagined the Bedford Highway as a multimodal corridor that would move not only vehicles, but people – and would strengthen the communities it crossed.

To accommodate and encourage active transportation, the design also features:

The Englobe team’s efforts and creativity on this project were recognized with an Engineering Excellence Award from the New Brunswick Association of Consulting Engineering Companies (ACEC-NB). Moreover, in April 2021 Englobe was retained once again to advance the design for the project’s critical first segment.

A design with a host of benefits

By prioritizing transit and AT, the design aims to achieve a 5% mode shift away from personal car/vehicle use. This is the equivalent of removing roughly 500 vehicles/day from this corridor.

The Bedford Highway Functional Plan helps Halifax Regional Municipality achieve its IMP goals of moving people and goods in efficient, affordable and environmentally-friendly ways. It also manages congestion by encouraging the use of public transit and active transportation modes, rather than simply expanding arteries to accommodate more vehicles.

And importantly, it fosters the creation of “complete communities” capable of supporting a broad variety of lifestyles. With multiple mobility options available, these communities enable people of all ages, abilities and backgrounds to live, work, shop, learn and play in close proximity to one another. A truly great vision for the community’s future, in line with Englobe’s vision of building a sustainable legacy, one project at a time.