The City of Swift Current celebrated the completion of its more than $5.9 million multi-use pathways and sidewalks project, funded in part by the federal and provincial governments.

Construction on the project began in May 2021. Work included construction of approximately 11 km of paved pedestrian/bicycle pathways and sidewalks throughout the community, along with a boardwalk, benches, shrubs, trees, pathway lighting and new signage. The multi-use pathways improve mobility connections and increase the safety of pedestrians and cyclists, bridging gaps across highways and improving access to schools and playgrounds. Please see attached map for pathway locations. 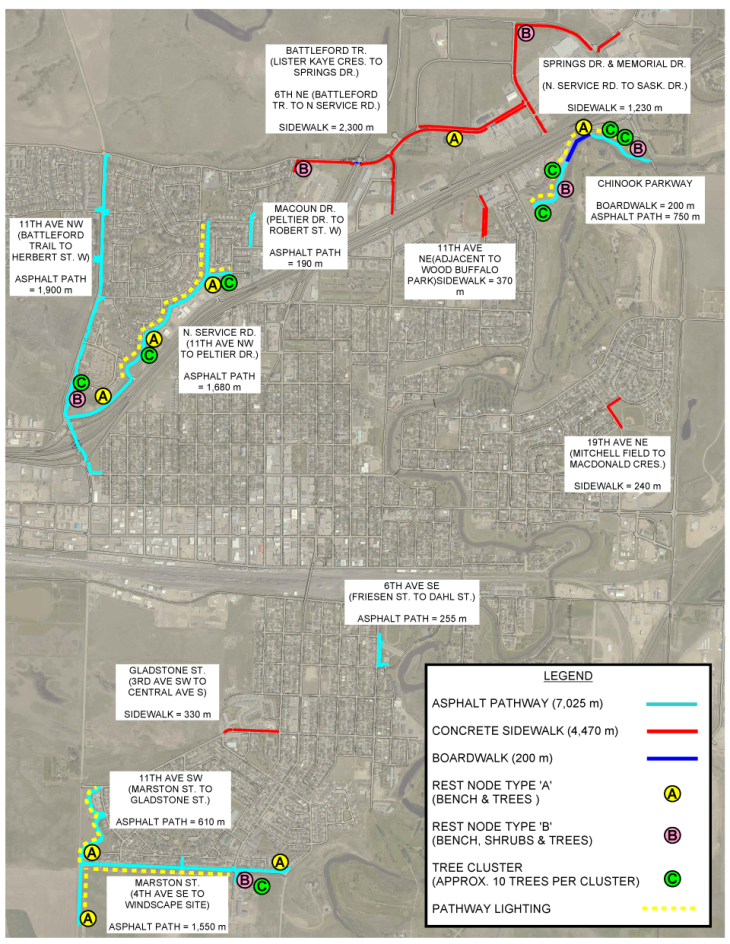 “The Government of Saskatchewan is proud to invest more than $1.9 million toward the City of Swift Current’s Active Transportation Expansion Project. This completed infrastructure provides more recreation opportunities for healthier lifestyles, enhances links between neighbourhoods and businesses in the community, and builds a better quality of life for Swift Current and our great province,” said Everett Hindley, MLA for Swift Current and Saskatchewan’s Minister of Mental Health and Addictions, Seniors and Rural and Remote Health, on behalf of the Hon. Don McMorris, the province’s Minister of Government Relations.

“The expansion of the pathway, known as the Chinook Parkway to our residents, is an exciting addition to our transportation system which has increased connectivity and breathed new life into maintaining healthy, active lifestyles,” added Swift Current Mayor Al Bridal. “The impressive 130-metre boardwalk located near Regier Honda, added shrubbery, benches and rest areas and over 260 pathway lights showcase the natural beauty of our city. We are very grateful to the governments of Canada and Saskatchewan for their investment into Swift Current, and we are immensely proud to announce the project completion.”

Ottawa invests over $85M in garage expansion for the Société de...