It’s been a long time coming: several decades to be exact. But with shovels in the ground and work moving forward, the reality of an all-season road connecting Whati to the territorial highway network is finally in the here and now.

The Tlicho All-Season Road is a 97-kilometre permanent roadway running from the small community of Whati (northwest of Yellowknife) to the provincial highway network west of the territorial capital. The $411.8-million project was awarded to North Star Infrastructure (Kiewit, Hatch, and Thurber Engineering) in November 2018, and is being delivered as a public-private partnership (DBFM). 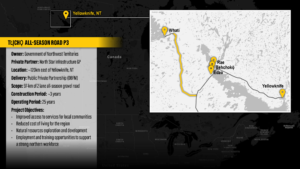 Whati Chief Alfonz Nitsiza realized the importance of the project thanks to his uncle, a former chief, who stressed the need to work with government and corporate partners to bring the project to fruition. Currently, the community only has roadway access two-to-three months per year thanks to ice roads, but that network has become unpredictable in the wake of the changing climate. The alternative is to fly to Yellowknife, a half-hour flight that costs $500 per person for a round trip, along with an additional cost for any necessities brought back to help survive the seasons when the ice roads are unavailable.

For the project to move forward, extensive environmental assessment was necessary to appreciate the best possible path with the least amount of disturbance. The solution was to follow an existing brownfield land-based winter road route, which also helped to reduce the overall cost of construction.

But in order to gain both short-term and long-term benefits from the new roadway, aside from the economic benefit of the permanent roadway, the local government wanted to work with a proponent that would be able to incorporate labour force opportunities for the people and Whati and nearby communities. The expectation was high, at least based on prior standards for local labour force involvement, with the threshold set at 35 per cent during the construction period and even higher for the project maintenance period.

According to Mark Brajer, CEO of the Tlicho Investment Corporation, it represents an opportunity for local labour to work close to home, something that rarely happens based on Whati’s located in the Northwest Territories landscape. Many in this line of work (machine operators, road builders, and construction labourers) often have to fly into work locations, be they mining operations or construction projects in other regions of the territory. But for workers from Whati, the roadway projects allows workers to stay close to home in the near term, get home at night during the latter stages of construction, and potentially stay local for the long-term if they are able to stay involved in the road maintenance. And those labourers are available, as mining projects in the region are slowing down or wrapping up. It also has provided a rare chance to train people skillsets that don’t currently exist in the community, such as surveying, expertise that can take root in the community.

Just a few short months into construction, the Kiewit team is already experiencing the benefits of working within the Whati community. Challenges are being quickly addressed, and those in the community possessing the skills to help are stepping up and getting involved.

For once, an important infrastructure project that will improve the lives of a community, is happening right in their own backyard.