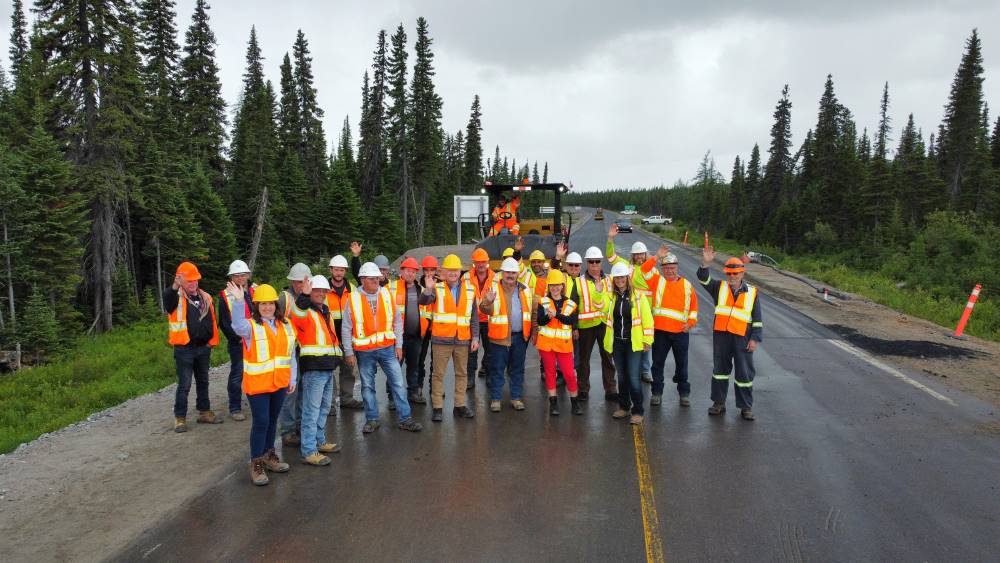 The Government of Newfoundland and Labrador announced that a significant accomplishment in transportation infrastructure in the province was achieved July 5, as paving of the Trans-Labrador Highway is completed. The completion allows residents, tourists, and commercial traffic to travel on more than 1,100 kilometres of paved highway between the Labrador Straits and Labrador West.

“This is an incredible accomplishment for Labrador,” said Premier Andrew Furey. “Our government has understood the benefits that a fully-paved highway would bring for Labrador communities and made it a priority to get this highway completely paved. Now that it’s completed, we look forward to seeing the people of the Big Land enjoy it for years to come.”

A multi-year contract was awarded in May 2020 to JCL Investments Ltd. to complete paving of the highway. Paving on the final section, between Cartwright Junction and Happy Valley-Goose Bay, began in June 2022. Work will continue in the area this month as the contractor completes shouldering work on the highway.

The upgrading of the original highway began in 1997 in three phases, and included upgrades between Happy Valley-Goose Bay and Labrador West, construction of a two-lane all-season gravel road between Red Bay and Cartwright Junction, and a new two-lane, all-season gravel road between Happy Valley-Goose Bay and Cartwright Junction.

“The paving of the Trans-Labrador Highway has been extremely important to Labradorians,” added Elvis Loveless, Minister of Transportation and Infrastructure. “Our  investments in the highway as well as marine services to Northern Labrador and across the Strait of Belle Isle have led to a more comfortable and reliable transportation network in the Big Land for residents, businesses, and tourists. That will only improve now that the highway is completed.”

Nearly $1 billion has been invested to build and pave the highway since 1997, including more than $230 million since 2016.

Construction work since 2016 focused on numerous areas, including upgrades and paving of the gravel road between Red Bay and Happy Valley-Goose Bay and upgrades and repaving between the Quebec border and Red Bay.

The Provincial Government remains committed to advancing transportation infrastructure improvements in Labrador with a terms of reference on a pre-feasibility study on a road to Northern Labrador, with input from community and Indigenous leaders, being finalized. The request for proposals for the study, which will be cost-shared between the Provincial and Federal Governments, is anticipated to be released this summer.

“Building a road across the expanse of Labrador and the completion of the pavement from L’Anse au Clair to Labrador West represents an incredible effort by the Provincial and Federal Governments. While there were many skeptics who questioned whether we would ever see this day, I am most proud to be part of a team who remained firm in our resolve and our commitment  to get this done,” said Lisa Dempster, Minister Responsible for Indigenous Affairs and Reconciliation and Minister Responsible for Labrador Affairs