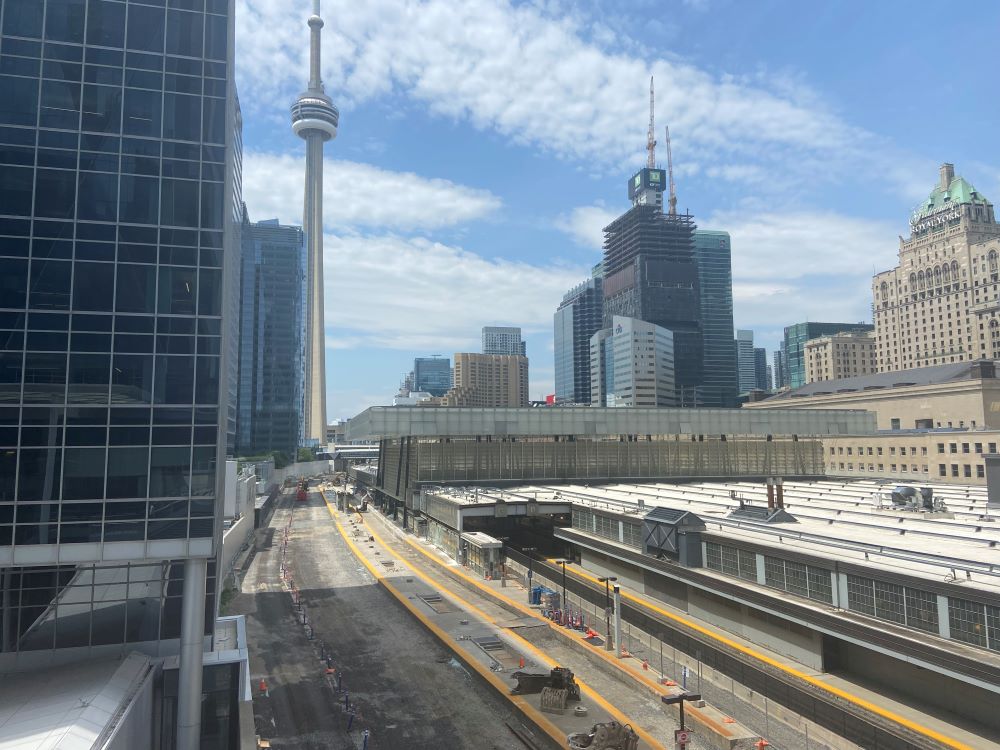 Union Station is no stranger to upgrades, and the latest round of improvements kicked off earlier this year as part of the Union Station Enhancement Project (USEP).

In May, the project team successfully relocated the electrical power room – which provides power to all of Union Station – without any interruption in service.

The relocation of the power room was required to clear the way so that excavation planned within the southernmost part of the rail corridor can be completed safely.

A new temporary bike storage room is being constructed further north, adjacent to the existing York Concourse, to replace the lost bike storage, which is scheduled to open in late summer 2022.

The four southernmost tracks at Union Station have been removed and utilities relocated.

Demolition of the canopy over GO platforms 24 to 27 is underway and will be completed this summer. Metrolinx needs to increase the capacity of the south platforms first, and will then reconstruct the north platforms at Union Station as part of a future phase of work.

Inside the station, crews continue to complete ceiling removals and cable relocations south of the VIA Concourse to make way for excavation planned in the southernmost part of the tracks near Union Station.

Two cranes will be installed at Union Station this summer and will be onsite for the duration of the project.

These cranes travelled 6,500 kilometers from Germany, and can lift over 20,000 kg, or 10 fully loaded mini coopers each. They can reach up to 60 meters, or the length of two basketball courts.

Starting this fall, platforms 24 to 27 will be demolished to make way for excavation for the new south passenger concourse (which will span 325 meters from York to Bay Streets) and two new wider platforms that will be installed as part of this project.

Two new temporary sets of stairs will be constructed – one at the south end of the VIA Concourse connecting to the retail space below the concourse level, and one on the east end of the hallway connecting the York, VIA, and Bay Concourses. This will provide customers with access to the remainder of Union Station and the Scotiabank Arena during construction.

This area will become part of the new south concourse when construction is complete. After the closure, customers will connect with Union Square south of the Bay Concourse via the Bay-Scotiabank connection (shown on the map above).

There will be lots of wayfinding signage in place and advanced communication with customers ahead of the closure.

As part of the project, the roof of the service dock connection (shown on the map above) will need to be lowered to accommodate the future south concourse ceiling heights above, and the two new tracks that will be installed as part of this project.

Following the completion of the work noted above, excavation will begin for the south passenger concourse.

Featured image: Southern tracks have been removed, and crews continue to remove the canopy from platforms 26 and 27 at Union Station. (Metrolinx photo)

GO Expansion progress along the Barrie Line well on its way