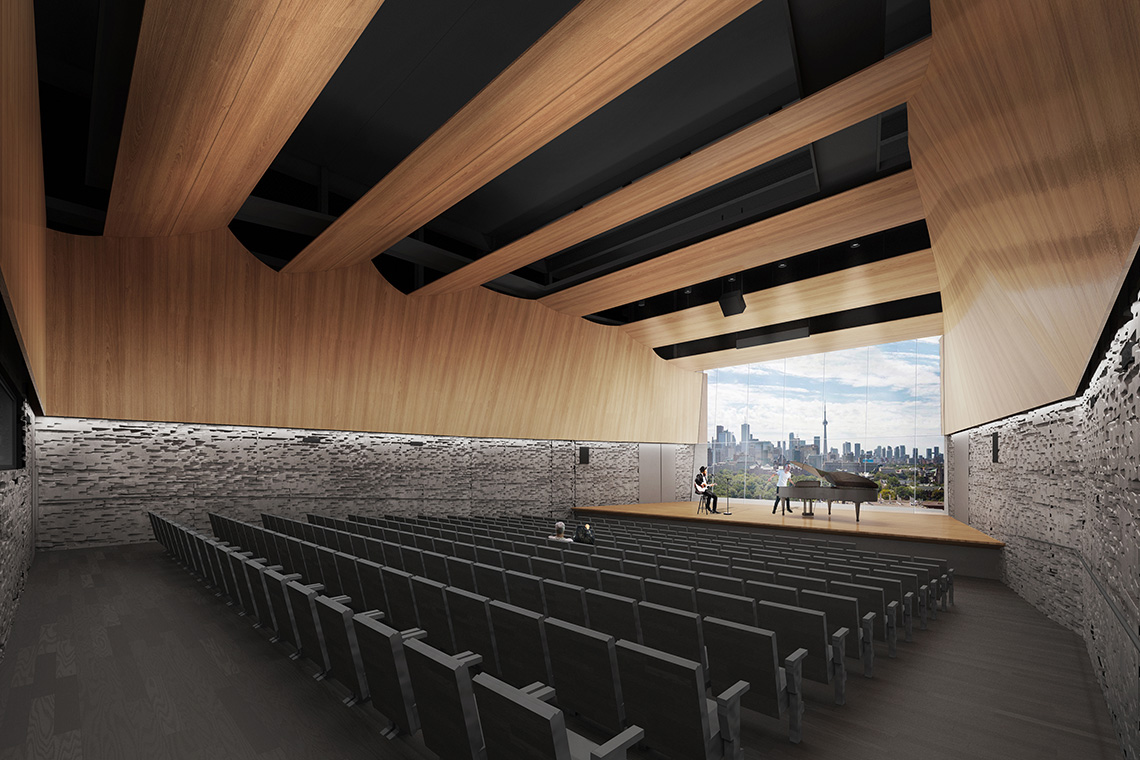 The University of Toronto is welcoming the outcome of a formal mediation process led by the Ontario Land Tribunal that has resulted in the approval of a revised rezoning envelope for the new Centre for Civilizations, Cultures & Cities (CCC) building located at 90 Queen’s Park on the St. George campus.

Once constructed, the building will house U of T’s School of Cities, department of history, department of Near and Middle Eastern civilizations, Institute of Islamic Studies and an arm of the Anne Tanenbaum Centre for Jewish Studies – all in the Faculty of Arts & Science. It will also include spaces for the Faculty of Law and the Faculty of Music, including a world-class music recital hall.

“We are pleased with the result of this settlement hearing process, which saw all parties make compromises in the interest of achieving a positive resolution. That’s a win for the university, the community and the city,” said Christine Burke, U of T’s assistant vice-president, university planning.

The 90 Queen’s Park site was acquired by U of T in 2009. Located near the intersection of Bloor Street and Queen’s Park, the site acts as a key gateway to the St. George campus while linking iconic buildings and structures in the area such as the Royal Ontario Museum, Edward Johnson Building, Falconer Hall and Flavelle House.

Although City Planning and Heritage Preservation Services staff reports supportive of and recommending approval of the project at both the Heritage Preservation Board and at Community Council, members of the community expressed concerns with the proposal and the project was ultimately deferred at the meeting of the Toronto and East York Community Council on Oct. 15, 2020, pending completion of a future Queen’s Park cultural heritage landscape study. The university appealed to the Ontario Lands Tribunal in October 2020.

The result is a revised building envelope that redistributes the building’s massing to respond to community concerns about the way the building interfaces with its surroundings, while still offering the same amount of collaborative space for U of T students and researchers, civic leaders and members of the public interested in city-building and diversity.

Among the adjustments made to the building design were setting its average height to 33.6 metres across its three roofs, a reduction of more than five metres from the original proposal. The tallest portion of the building to the north of the site will now have a height of 35 metres, with the shortest north-east portion standing at 18 metres tall to sync with the ROM’s east wing.

The revised massing design was accepted by city council and approved by the Ontario Land Tribunal with the consent of all parties, clearing the way for the project to proceed.

“Thanks to this positive outcome, we can now kickstart the detailed design of 90 Queen’s Park and ask our architects to get back to the drawing board, so that we can move into construction as soon as possible,” Burke said. “The need for this space is critical to meet the space demands of the faculty and the university.”

Evelyn Casquenette, senior planner at U of T, said that it was important that the revised design continue to conserve the 19th-century Falconer Hall building. While the westernmost wing of Falconer Hall will be removed, “one of the many positives with the new design is that more breathing room has been provided around Falconer Hall, so there will be more space between the CCC and Falconer,” Casquenette said.

She added the proposal will also make for more prominent framing of Falconer Hall from along Queen’s Park, while the building’s restored heritage west wall will be visible from inside the CCC building lobby to the south and from a new courtyard space between the two buildings on the north.

Casquenette noted that the revised massing did not alter the fifth-floor music recital hall’s stunning views of the downtown skyline – calling it a “spectacular space” for the community at large to enjoy once the building is constructed. There is another event space on the eighth floor that will be linked to a green roof terrace that will similarly showcase views of the city and U of T.

The redesign also maintains original plans for a sizeable north plaza and outdoor café to welcome members of the public.

Construction on the project, which is expected to take approximately three years, is scheduled to begin in early 2023.

“90 Queen’s Park is such an important project for U of T, so we’re delighted to be able to move ahead and work hard to create a special place on campus where the university and city connect and interact,” Burke said.

“We look forward to sharing the designs of the project as it evolves and takes shape.”

Featured image: A fifth-floor recital hall in the proposed Centre for Civilizations, Cultures & Cities building at 90 Queen’s Park will include stunning views of the downtown skyline (Diller Scofidio + Renfro in collaboration with architects-Alliance)

How political indecision affects the timelines of large infrastructure investments