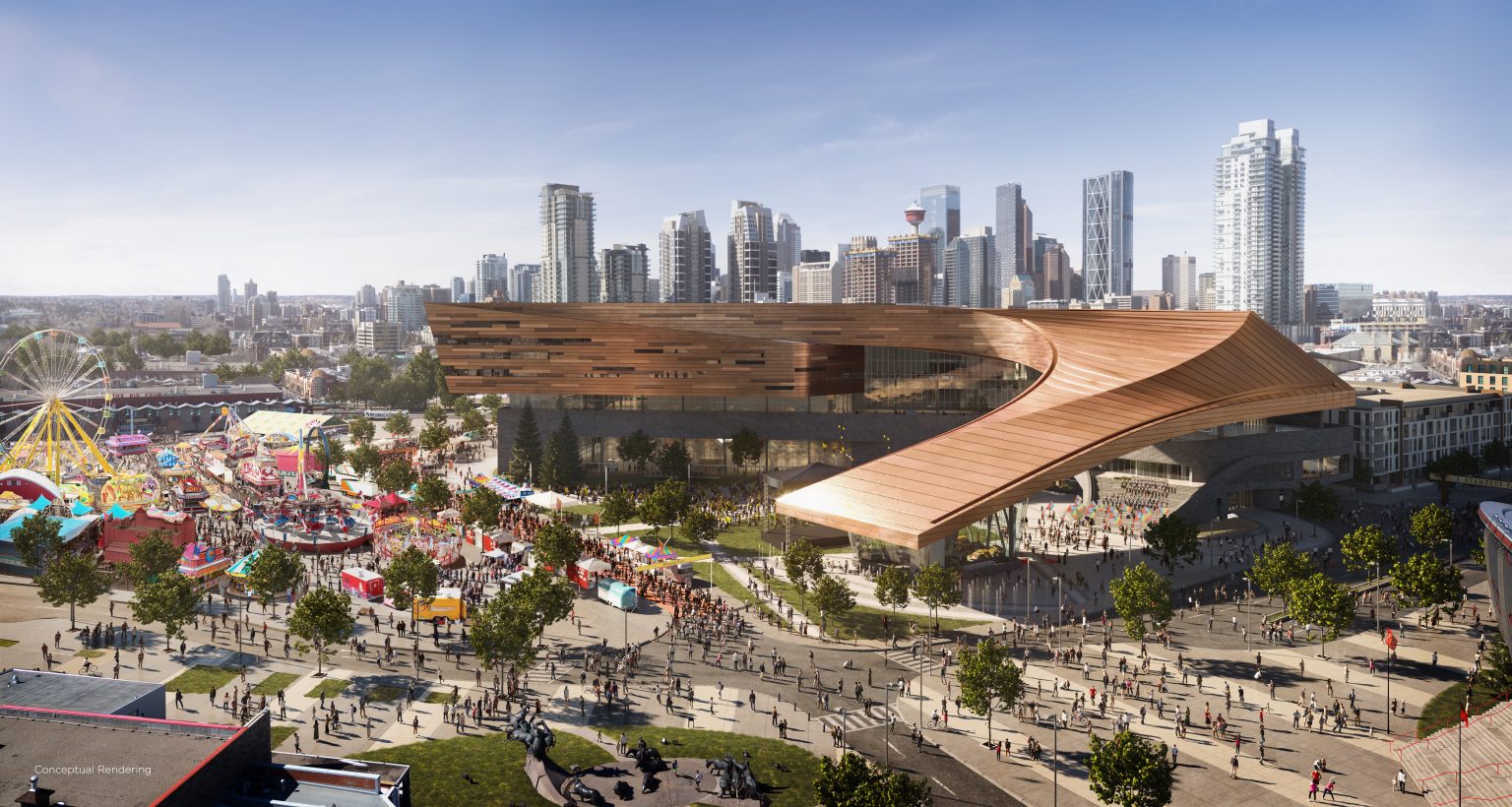 The pre-construction phases have rolled out smoothly over the past 24 months. The Calgary Stampede and CMLC chose the design team in Spring 2019 and revealed the facility’s transformative design in June 2020, followed by construction of Hall F through the summer of last year. Crews have worked to prepare the site with extensive utilities upgrades and demolition work over the past year, readying the convention centre for its 560,000 square foot expansion.

“The BMO Centre expansion will provide state of the art facilities for community engagement and economic benefit through job creation and tourism,” says Steve McDonough, President & Chairman of the Calgary Stampede. “The expansion will anchor Calgary on the international map as a leading convention host, attracting larger conventions and meetings to our province.”

Designed by leading firms Stantec/Populous/S2 Architecture, the building’s innovative design will dramatically transform the Calgary skyline. Beyond being significantly larger than the existing BMO Centre offering double the rentable space, the new facility will reflect, inside and out, today’s best practices in convention facility design.

The project is funded through equal contributions from three orders of government and provides opportunity for economic diversification and job creation in Calgary and the surrounding region.

“The Calgary Stampede’s history goes back over 100 years, and it’s wonderful to see ‘The Greatest Outdoor Show on Earth’ continue to grow and adapt with the times and needs of Calgary, Alberta, and Canada,” said the Honourable Catherine McKenna, federal Minister of Infrastructure and Communities. “The Government of Canada is proud to support an investment of $500M for the expansion of the BMO Centre at Stampede Park. Today’s groundbreaking is the next step in this important project which will create good jobs and reinforce Calgary’s position as a top convention destination. Canada’s infrastructure plan invests in thousands of projects, creates jobs across the country, and builds cleaner, more inclusive communities.”

“It is exciting to celebrate the groundbreaking of the BMO Centre expansion today, and what it means for Alberta’s largest city. This incredible $500 million project will help create thousands of jobs and millions of dollars in economic benefits, as our world-class city delivers a world-class expo and convention centre. This is an important step in our economic recovery, and demonstrates the optimism, hard work, vision and entrepreneurial spirit that makes Calgary the heart of the west,” says Alberta Premier Jason Kenney.

Prasad Panda, provincial Minister of Infrastructure adds, “Infrastructure projects like the BMO Centre expansion, are keeping Alberta’s economy moving by providing good-paying construction jobs now at a time when they’re needed most. Over the long term, programming and operations of the new convention centre will benefit the entire community by ensuring ongoing employment opportunities and supporting vital economic activity.”

Following the groundbreaking, visitors to Stampede Park can expect to see a significant increase in construction activity on site. This work coincides with other major projects underway in the district, including the 17th Avenue SE extension, Victoria Park/Stampede LRT station improvements, a revamped Stampede Trail retail corridor and the new Event Centre, all integral components of the master plan vision for the area.

“I’m so pleased to see the BMO Centre expansion progress,” said Mayor Naheed Nenshi. “We are solidifying our role as the ultimate host city, while creating new jobs and economic activity in the creation of a vibrant Culture + Entertainment District in Victoria Park.”

Says Kate Thompson, President and CEO of CMLC, “We are thrilled to see this project move into the construction phase on schedule today. I believe it’s just the beginning of big, positive change for this district and downtown Calgary as a whole—something that’s going to be galvanizing for our city, which, as we know, has weathered some challenges over the past couple of years.”

When it opens in 2024, the BMO Centre will be the largest convention facility in western Canada, elevating Calgary into the top tier of the competitive international meetings and conventions market.