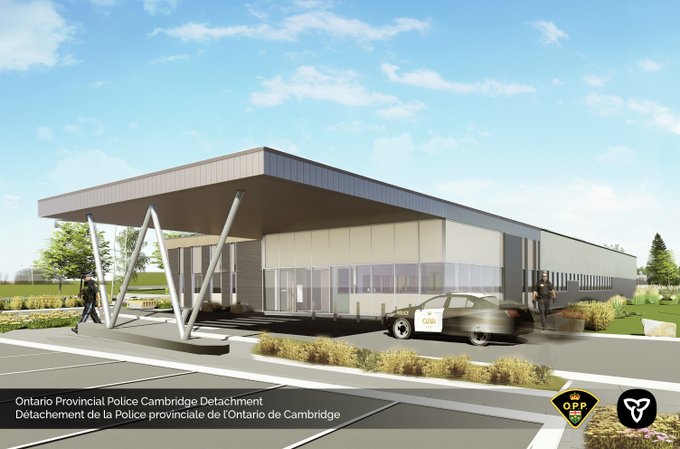 The Ontario government is building a new modern Ontario Provincial Police (OPP) detachment in Cambridge to replace the former facility that was destroyed by fire in September 2018. The new facility will provide frontline police officers with the leading-edge equipment and technology they need to better serve and protect their communities.

“Public safety is and will always be a top priority for our government,” said Solicitor General Sylvia Jones. “The new detachment will ensure our local OPP staff have access to the modern policing tools they need to protect people in Cambridge and keep local communities safe.”

Construction is expected to begin in fall 2021 with completion targeted for mid-2023.

The new detachment has been added to the province’s OPP Modernization – Phase 2 project, announced in 2018 that has so far replaced nine aging OPP facilities that were at the end of their lifespan and no longer met the requirements of today’s police operations.

“The impressive new Cambridge OPP detachment, which will be equipped with a Collision Reporting Centre, will provide our officers and civilian members with an accessible and energy-efficient facility to continue to deliver on a shared commitment with our government to safe communities and a secure Ontario,” said OPP Commissioner Thomas Carrique.

“Infrastructure modernization projects like this new detachment are essential to the safety and security of our communities, while ensuring our first responders have what they need to do their jobs as effectively as possible,” said Laurie Scott, Minister of Infrastructure. “We will continue to work with communities like Cambridge to invest in local priorities and build, renew and modernize the infrastructure that people rely on every day.”

The new Cambridge OPP detachment will be located at 1360 Hespeler Rd.

The new facility will be accessible and is designed to meet the Leadership in Energy and Environmental Design (LEED) Silver Standard, which recognizes buildings with reduced environmental impacts.

This project will be delivered by Infrastructure Ontario through its public-private partnership (P3) model.

All 10 detachments under OPP Modernization – Phase 2 are built by a team led by Bird Capital OMP Project Co Inc. who will oversee the design-build of the Cambridge detachment.