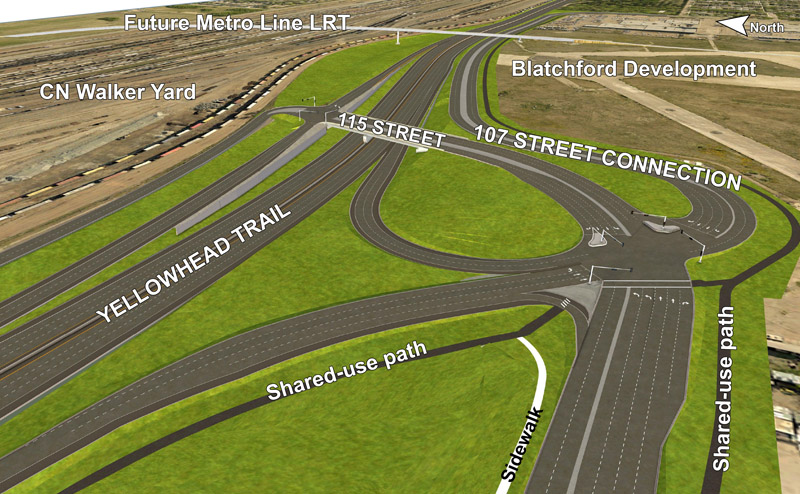 The City of Edmonton has completed the concept plan for the largest and most technically complex project of the Yellowhead Trail Freeway Conversion Program. While a detailed cost estimate will be determined during the design phase, the St. Albert Trail to 97 Street project is expected to require approximately half of the freeway conversion’s $1 billion budget.

The City developed the plan for the 4.3 kilometre section of Yellowhead Trail, from St. Albert Trail to 97 Street, following 18 months of technical evaluation and analysis and public and stakeholder engagement. Several options were presented to the public in fall 2020.

With the concept plan complete, the project will move into the design phase in fall 2021. The initial stage of design will build on the work completed in concept. As the design progresses, refinement of the plan will take place. The public is encouraged to continue to engage with the City through the design phase to ensure the final design balances the goals of the freeway conversion with community, business and commuter needs.

Construction on Yellowhead Trail from St. Albert Trail to 97 Street is expected to begin in 2023 and to be completed by the end of 2027.

The freeway conversion will accommodate long term traffic growth, allowing traffic to flow freely with the removal of traffic signals, intersections and crossings. It will result in uninterrupted travel in eastbound and westbound directions, improved safety with free-flowing traffic, reduced idling emissions, improved goods and service movement and travel-time savings.