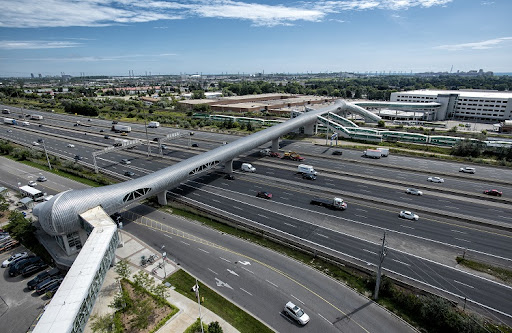 It’s no small feat to jump over 14 lanes of traffic and another six rail tracks. And that boast has earned the Pickering Pedestrian Bridge – the remarkable piece of engineering over Highway 401- an equally iconic award and place in the record books.

And want to see how the official measurement took place when the submission was first sent to Guinness – the reference book published annually since 1955 to document world records by man as well as extremes of nature. Here’s a video of those important steps.

Completed in 2018, this massive record-holder is 250-metre long bridge spans 14 lanes of Highway 401, six live rail tracks, and a two-lane municipal roadway. It can be seen clearly from an airplane flying overhead and connects the Pickering GO Station on the south side to Durham region’s largest shopping mall, local college, and regional bus service on the north side.

The bridge’s iconic architecture is highlighted at night with close to 300 LED lights, giving its organic shape a soft glow in rotating shades of lilac, purple, blue and teal.

The bridge has previously been acknowledged with the City of Pickering’s 2019 Urban Design Award, and following a worldwide competition, also received the 2019 Engineering News Record Global Best Projects Award in the tunnel/bridge category for the Pickering Pedestrian Bridge.