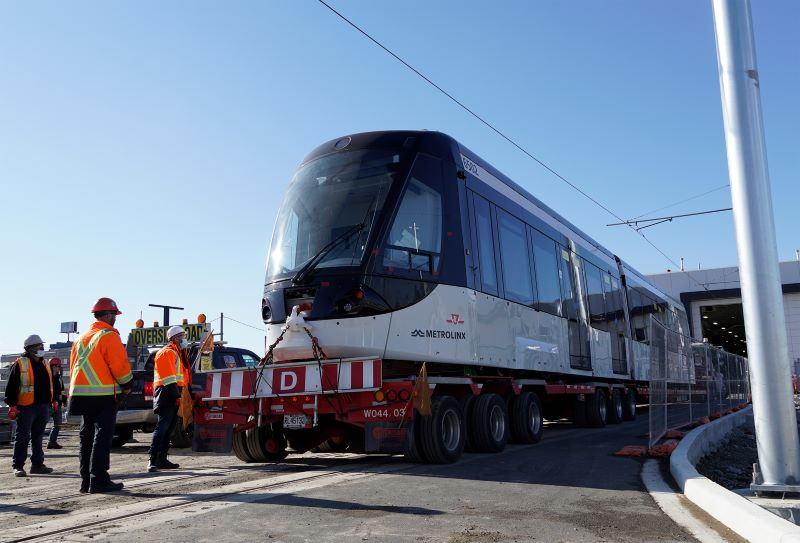 A second light rail vehicle (LRV) has now been delivered to the Finch West Maintenance and Storage Facility (MSF).

The new 81,000 kg LRV was recently delivered to Mosaic Transit Group – the builders Metrolinx brought in to construct the new Toronto line – in two parts via a special trailer from Alstom’s Brampton facility.

This delivery last Friday (Nov. 12) was executed a little differently than the previous one, as the MSF site team directed the trailer pull in front-first, as opposed to backing in like last time. This resulted in some challenging tight turns and delays.

To ensure a smooth delivery, the MSF site team performed a dry run back in October so teams were fully prepared for the following two days. Mosaic Transit Group also had its recovery vehicle, which is a specialized tow-truck, close by in case the LRV experiences any testing issues.

The new MSF shunter, dubbed ‘Little Beast’, was also on-hand so it could help maneuver the new LRV through the MSF yard and get it to the burn-in track section.

Following the LRV’s arrival at the MSF, the halves were joined and major subsystems will now be inspected.

Low-speed testing inside the MSF yard will begin at around 5 km/hour, before it can head to the burn-in-track section, where each train will be tested for 600 km without defect.

Bicycles will be allowed on the LRVs during off-peak travel times as well.

Once the Finch West LRT line is operational, service will run every five minutes during peak hours, helping passengers arrive at their destinations quickly and safely.