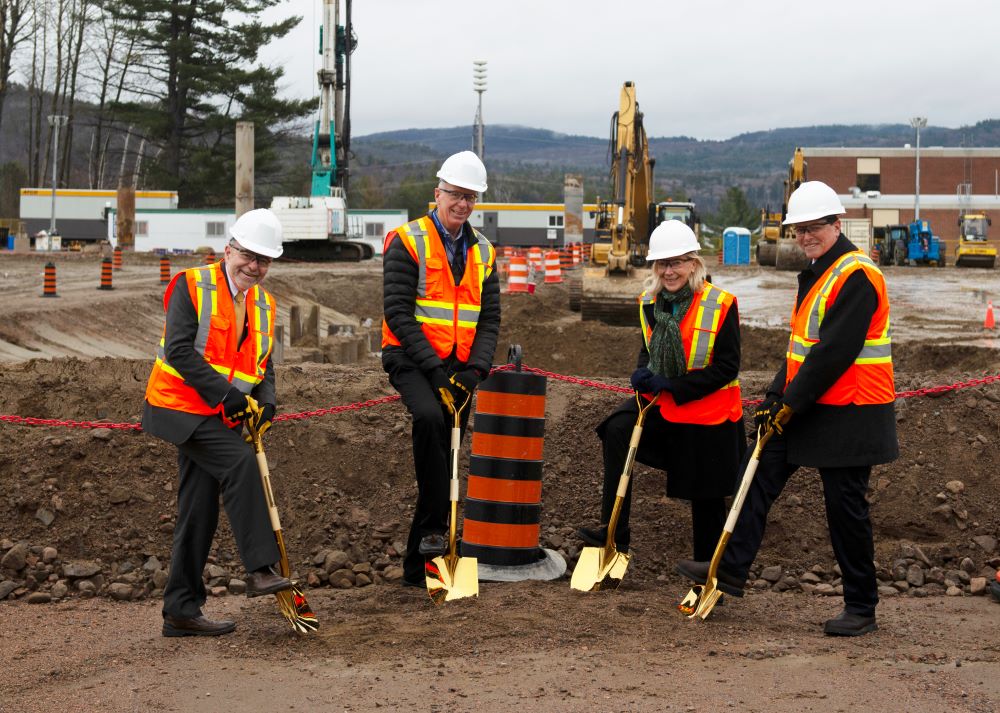 Scheduled for completion in the spring of 2028, the ANMRC is a state-of-the-art research complex that will be one of the largest nuclear research facilities ever built in Canada.  When construction is complete, it will serve as the backbone of CNL’s research and development infrastructure. The 10,000-square-metre facility will feature 23 laboratories, accommodate 160 employees and consolidate key capabilities from aging facilities scheduled for decommissioning at the site.

“This exciting new research facility will ensure that CNL maintains its position as a world leader in nuclear science and technology into the future. The investments that the Government of Canada has made into the revitalization of the Chalk River Laboratories give us the facilities and infrastructure needed to confront some of the nation’s most pressing issues, from climate change to energy security. That is the responsibility we have as Canada’s national nuclear laboratory, and the ANMRC is at the centre of this vision,”  said Joe McBrearty, President & CEO, Canadian Nuclear Laboratories.

Among other functions, the ANMRC is designed to support Canada’s clean energy goals by providing services critical to the life extension and long-term reliability of existing reactors, including Canada’s fleet of CANDU nuclear power reactors and other designs from around the world. In particular, as the largest single capital investment in the revitalization of the Chalk River campus, the ANMRC will feature 12 new shielded hot cells that will enable post-irradiation examination of small modular reactor (SMR) and next-generation nuclear fuels in addition to  glovebox facilities to support the development of advanced fuel fabrication concepts.

“To fight climate change and lower emissions, we must look to all non-emitting sources of energy, which very much needs to include nuclear energy. The Advanced Nuclear Materials Research Centre (ANMRC) is an important step forward in Canada’s long history as a peaceful user of nuclear power. The work undertaken here will help guide a new generation of nuclear technologies and ensure that our nuclear sector remains a reliable, safe, cost-effective and innovative source of energy and opportunity,” said Jonathan Wilkinson, Minister of Natural Resources.

The ANMRC is one of a series of new laboratories, office buildings and support facilities that are being constructed at the Chalk River Laboratories to revitalize the campus, thanks to a $1.2-billion investment from AECL on behalf of the Government of Canada. In addition to the ANMRC, a Science Collaboration Centre is under construction that will serve as CNL’s central planning and collaboration space. A new two-storey industrial-use support facility and a new site entrance building were recently completed, and several science facilities have been opened in the last few years, including a new hydrogen laboratory complex, a new materials research laboratory and a new tritium laboratory.

Major investments have also been made into infrastructure improvements for the campus, including new domestic water and natural gas service, a modern sanitary sewage treatment facility and a system to more effectively manage storm water.

Featured image: Fred Dermarkar, AECL president and CEO; Jim Burpee, chair of the AECL Board of Directors; Sue D’Eon, Mayor of the Town of Deep River; and Joe McBrearty, CNL president and CEO, participate in a ground breaking ceremony at the Chalk River Laboratories campus to celebrate construction of the Advanced Nuclear Materials Research Centre. (CNL)

CNL extends the operating life of research reactor by another 30...