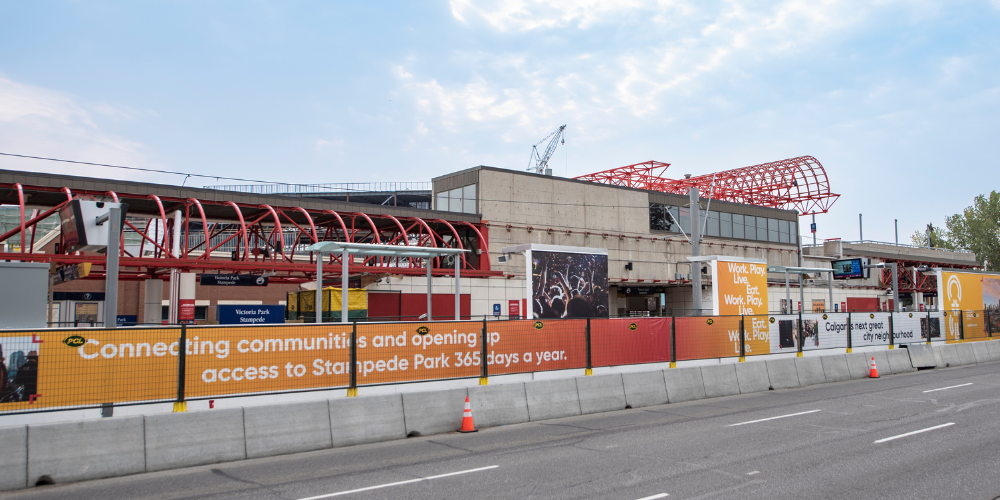 Since beginning construction on this landmark city-building project in 2020, the 17 Ave S.E. Extension and Victoria Park/Stampede Station Rebuild project team has been making steady progress on the enabling works that will facilitate development of a new station and roadway extension.

This fall, with most of the enabling works completed, the team is turning its attention to the construction of the new station, which will be more accessible and better integrated into the surrounding landscape. Development of the 17 Ave S.E. extension will bring people driving, walking and cycling across Macleod Trail directly into Stampede Park for the first time.

“The new station and extension of 17 Ave will create an important connection between Stampede Park and Calgary’s Beltline and Downtown communities, making it easier for our community to gather,” says Jim Laurendeau, vice president, Park Planning & Development at Calgary Stampede. “We are excited for how this new connector will help create a key gateway to Stampede Park, enhance the way people experience our iconic space and how they’ll access events, conferences and gatherings at BMO Centre, GMC Stadium, the Saddledome and more, welcoming the world year-round.”

In 2021, Calgarians saw the demolition of the ramp and +15 that connected pedestrians to Victoria Park/Stampede Station across Macleod Trail, and the opening of a new at-grade crossing at 17 Ave S.E. With the new at-grade crossing, the previous 400m pedestrian journey up the ramp and over the +15 was shortened to less than 60m straight across 17 Ave, making the trip faster and more accessible for transit users and visitors to Stampede Park alike.

Earlier in 2022, the project team completed the new utility complex and Elbow River siding track bridge, constructed a new temporary outbound platform in the eastern lane of Macleod Trail, installed a new signal system to support temporary and permanent stations, and completed the installation of 9.5 kilometre of duct in the transit right-of-way between Erlton and Victoria Park stations.

Now, the project team is preparing to open the temporary outbound platform that will enable transit operations and minimize disruption for transit customers through the demolition of the old station and construction of the new one.

CMLC challenged the design and construction teams at the outset of the project to be innovative and intentional with construction phasing and delivery, and the temporary outbound platform is one example of that innovation.

The week after the Thanksgiving long weekend, transit riders at Victoria Park/Stampede Station will board trains from side-loading platforms, using the new temporary platform outbound and the west side of the existing platform inbound. This change will remain in effect until the new permanent station, with platforms twice the size of the original and four heated shelters, is operational in late 2023.

“We are at a very exciting point in this important and complex project,” says Kate Thompson, president and CEO of CMLC, the development manager for the project and steward of the Rivers District. “Building a project of this scale and significance in a tight right-of-way, while maintaining transit service, in the heart of one of the most active destinations for entertainment and cultural programming in the city, is a complicated matter. We’re grateful for the partnership of Calgary Stampede and Calgary Transit, as well as our consulting and construction teams lead by ISL and PCL, in planning and delivering this critical connector in the evolving Culture + Entertainment District.”

The new station is scheduled to be operational in late 2023, with completion of sidewalks, ramps and landscaping to follow. The 17 Ave S.E. extension will be completed in coordination with the BMO Centre expansion, both of which will wrap up in 2024.