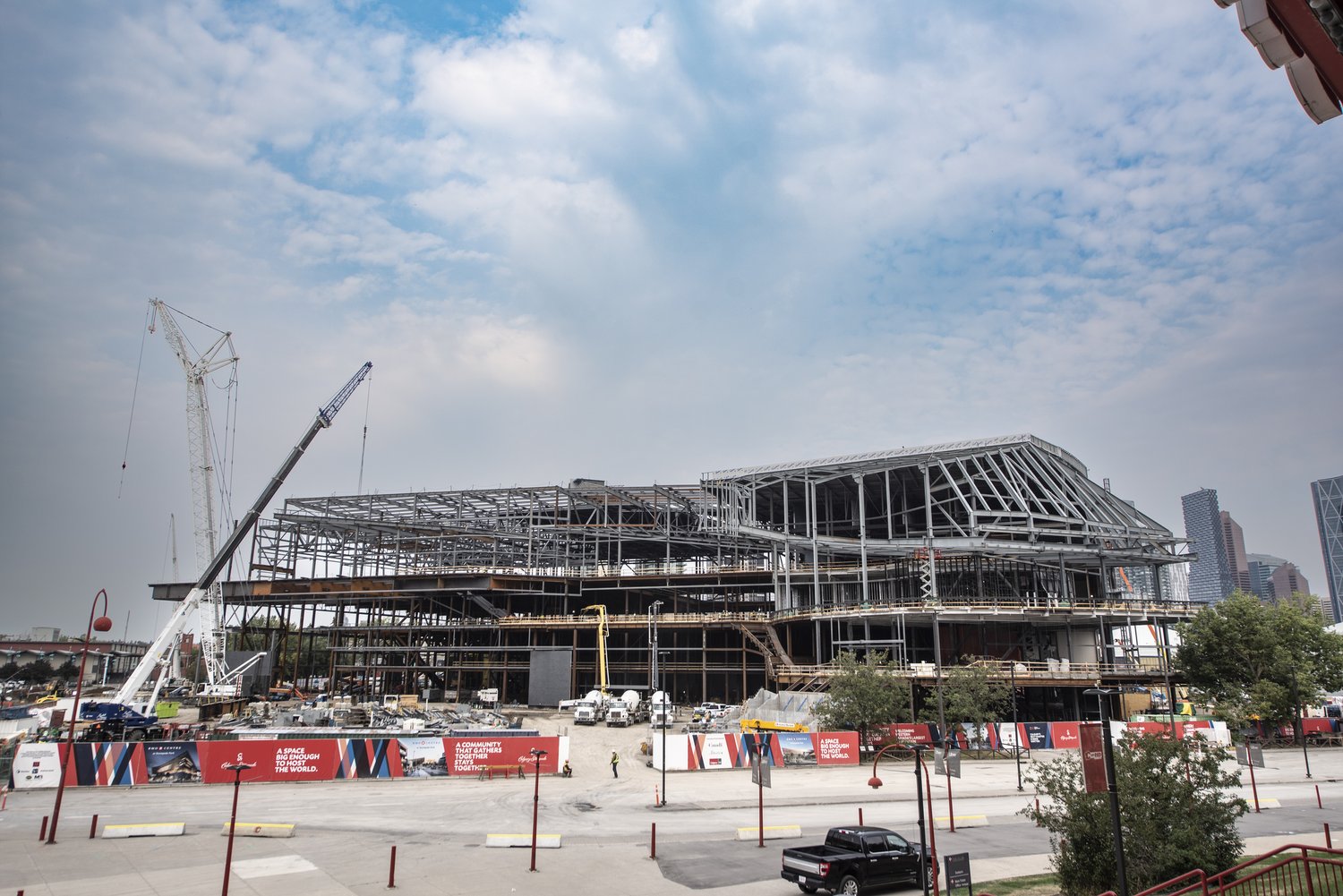 Calgary Municipal Land Corporation (CMLC) and the Calgary Stampede announced that the steel structure for the BMO Convention Centre expansion (No. 90 on ReNew’s 2022 Top100 Projects report) will be completed this week, as the final 90 ft. piece of steel is set into place. In just 11 short months, crews have installed 9,000 metric tonnes of steel to form the structure of the BMO Centre’s 565,000 sq. ft. expansion, which now stands taller than the adjacent GMC Stadium and Saddledome on Stampede Park.

The $500M expansion – generously funded in equal parts by the Government of Canada, the Government of Alberta and The City of Calgary – will double the centre’s capacity for conferences, meetings and events. With more than 100,000 sq. ft. of new exhibition space, 38 new meeting rooms, two new ballrooms totalling 70,000 sq. ft., and a dramatic central gathering space anchored by the largest indoor fireplace in Canada, the BMO Centre will be a state-of-the-art venue that showcases the best in both technology and western hospitality.

“This is an incredible milestone on a key project that will help the Calgary Stampede welcome the worldؘ—and our community—in 2024 and beyond,” said Joel Cowley, CEO, Calgary Stampede. “We can’t wait to open the doors to western Canada’s largest convention centre; we have already seen great interest in our remarkable new gathering space, with conferences already booked for June 2024, onwards.”

The steel that comprises the massive structure was fabricated in seven steel shops across Alberta, Ontario and Saskatchewan. In the ballrooms, steel spans are up to 180 ft. long and 19 ft. deep – the length and depth of an Olympic swimming pool – allowing for an impressive column-free space. The building is also designed to support loads up to four times greater than typical assembly-type buildings, enabling the building to host any type of event imaginable. In fact, the load allowance in the exhibition hall allows for fully-loaded semi-trucks to be driven inside the building.

Fun Fact: At the ‘last beam’ celebrations, the final piece is signed by the team and hoisted with a fir tree on top as a symbol of good luck. 🍀

“We are thrilled with the progress we’re making on this important project and for what it means for Calgary,” said Kate Thompson, president and CEO of CMLC. “We’ve successfully navigated a volatile market and challenging supply chain to arrive at this critical project milestone on schedule, and to see the expanded BMO Centre take shape in Calgary’s emerging Culture + Entertainment District is a really positive indicator of the big things yet to come in the area.”

Designed by an award-winning team of architects at Stantec, Populous and S2 Architecture, the BMO Centre expansion will create warm and unforgettable experiences for generations to come. PCL Construction and M3 Development Management have skilfully led the delivery of the project with the support of contractor and trades teams. RJC Engineers, in collaboration with Magnusson Klemencic Associates (MKA), as well as Walters Group, have been instrumental through the installation of the steel structure.

“This is an exciting milestone in a major city-shaping project that has been expertly managed by CMLC and the whole project team,” said Stuart Dalgleish, GM of Planning and Development Services at The City of Calgary. “The expansion of the BMO Centre at Stampede Park furthers Calgary’s position as a thriving and dynamic hub for trade and tourism, advances our city’s economic resilience and position on the world’s stage, and represents a significant step toward realizing our vision for the Culture + Entertainment District, and our downtown transformation.”

With the steel structure complete, crews will now turn their attention to completing the building envelope and making the structure weather tight, before moving inside to install drywall, elevators, electrical systems, and finishings. The BMO Centre expansion will officially open in June 2024.