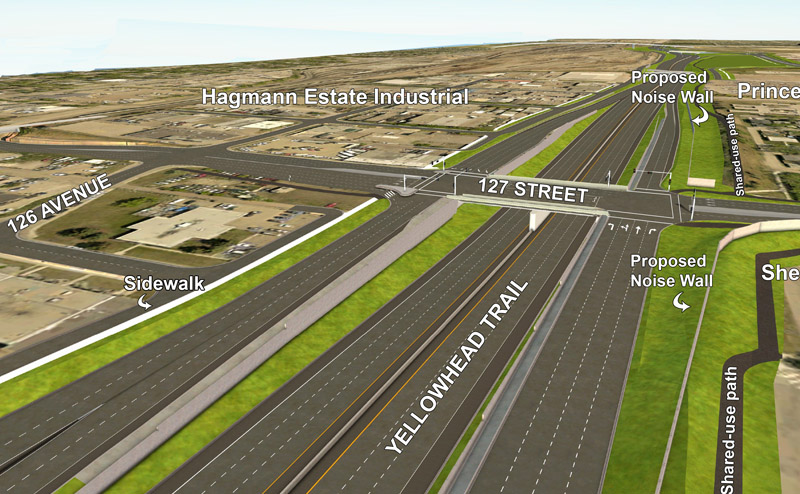 The City of Edmonton announced it has chosen PCL Construction as its partner to deliver the St. Albert Trail to 97 Street project, which is considered the most technically complex project of the Yellowhead Trail Freeway Conversion.
The City and PCL will work collaboratively throughout both design and construction. Construction is scheduled to begin in 2023 and is anticipated to extend to the end of 2027.
“We’re excited to reach this important milestone and move forward with this stage of the project,” said Kris Lima, Director of the Yellowhead Trail Portfolio. “This next step gets us closer to our goal of improving the safety, reliability and efficiency of a critical transportation corridor. The Yellowhead Trail Conversion will help support our city’s growth into an economically prosperous city that can support two million people in the coming decades.”
“PCL is excited to partner and collaborate with the City of Edmonton for the delivery of the St. Albert Trail to 97 Street project”, said Jason Portas, Vice President and District Manager of PCL Construction Management Inc. “With a successful and lasting local presence in the Edmonton region, PCL is proud to build essential infrastructure for our communities, where we live, work and play. We will complete this project safely and efficiently, helping the City of Edmonton in their goal to connect people and goods effectively along the corridor for years to come.”
Key features of the St. Albert Trail to 97 Street project include:
The concept plan for St. Albert Trail to 97 Street was completed in spring 2021. Design is underway and is anticipated to be complete by the end of 2023. Additional engagement opportunities on the design are planned for early 2023.
The Yellowhead Trail corridor will change from an expressway with signalized intersections and access locations to a free-flowing freeway with interchanges with six core lanes and a target operating speed of 80 km/hr.
Featured image: (City of Edmonton)
See also  OGCA releases Guide to Construction and Design Technology