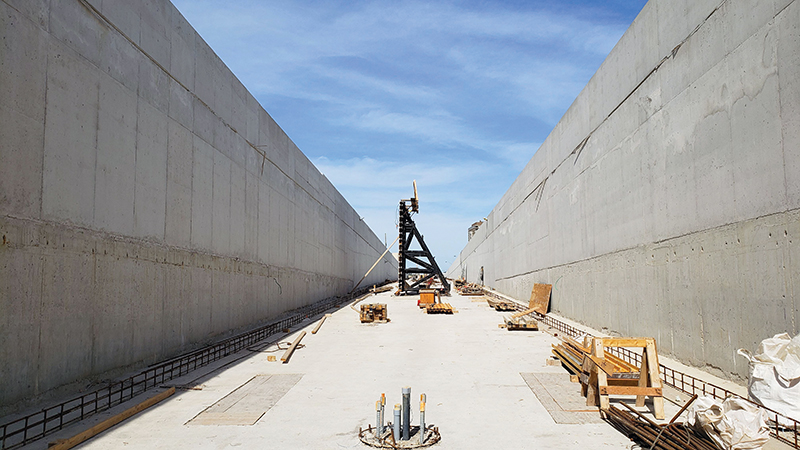 The Eglinton Crosstown LRT (ECLRT) is part of Metrolinx’s regional transportation plan, The Big Move, and is one of the first large-scale transit projects for the Toronto area. The ECLRT will provide fast, dependable, and comfortable transit along Eglinton Avenue, helping to reduce congestion, while offering reliable transit to Toronto residents and integrating transit services.

Since 2014, the joint venture (JV) known as Crosslinx Transit Solutions Constructors (CTSC) comprised of EllisDon Corporation, Aecon Group Inc., ACS – Dragados and SNC Lavalin Group Inc., has been responsible for the project design and construction. Upon completion, the ECLRT will connect east and west Toronto via 25 stations along a  dedicated route.

The completed project will contribute to significant greenhouse gas (GHG) emissions reductions by taking cars off the road and reducing the need for diesel buses. In addition, the project provided an opportunity for further GHG emissions reductions during the construction process.

The project required over 500,000 m3 of concrete—the equivalent of about 200 Olympic-sized swimming pools—across the 25 stations and stops, tracks, signals, communications system, as well as a maintenance and storage facility. According to independent policy institute Chatam House, each year more than four billion tonnes of cement are produced, accounting for around eight per cent of global CO2 emissions. Therefore, reducing the emissions from the project’s concrete provides a significant reduction potential in GHG emissions.

Increasing the amount of allowable SCM

The ECLRT project’s concrete specifications included stringent requirements for maximum temperature and maximum temperature differentials to minimize thermal cracking of structural elements. CTSC enlisted EllisDon’s Construction Sciences team to review the specifications and provide a thermal control plan for the project. A key mandate of the plan was to increase the amount of allowable supplementary cementitious material (SCM), which would reduce the heat released during the hydration process by reducing the portland cement content. The JV team invested in comprehensive testing to evaluate the SCM—in this case slag—at replacement levels ranging from 10 to 80 per cent in order to understand the durability and performance impacts when decreasing the cement content. Results from the study, in combination with data from Europe and other jurisdictions showed that SCM at a 70 per cent replacement value was optimal, increasing the durability while reducing temperature rise (also known as the heat of hydration) that could compromise the durability of the placed concrete.

The significant amount of mass concrete employed on the ECLRT required careful consideration to manage the heat generated during the curing process. Codes and standards specify mass concrete elements as anything at least a meter thick or elements subject to significant thermal stress such as the finished walls and slab at many of the stations. All mass concrete mixes generally have some percentage of SCM to aid in heat reduction during the curing process. Until recently, this was often limited to less than 50 per cent SCM; it is typical specifications for projects, similar to ECLRT, to still carry this limit. However, because of the sheer volume of the mass elements for ECLRT, the SCM increase was critical to managing the internal heat gained during curing. Collaboration among CTSC, concrete suppliers, and Metrolinx was required to enable the use of an increased volume of SCM at what is considered high volumes.

The main project sponsor and overall owner of the project is Metrolinx, however, Infrastructure Ontario (IO) and the Toronto Transit Commission (TTC) are significant stakeholders in the project. As major public agencies, these organizations must consider the public safety and future maintenance of the project assets in their evaluation of any proposed innovations. An increase the allowable SCM percentage in the design is only possible where it will not compromise the integrity of the project requirements as stipulated in the specifications. To support this, CTSC invested in further research, evaluating the impacts of various SCMs at a wide range of volumes to verify the impacts of changing the mix designs. Ultimately, by working with the concrete suppliers, subcontractors and the various stakeholders, CTSC confirmed 70 per cent replacement using slag cement was the optimal level to ensure the project would achieve its durability and performance requirements. After thorough investigation and verification of the performance of the HVSCM mixes, all stakeholders agreed to increase the SCM use in most of the mass concrete elements.

Throughout the process, CTSC has utilized Exact Technology to monitor the mass concrete placements, ensuring that the placements remain within the specified limits for maximum temperature and maximum temperature differential. Project teams were able to access critical data through Exact’s online portal on a 24/7 basis to make educated decisions for thermal control (e.g., adding or removing thermal blankets, or providing supplementary heat to the placed concrete as it cures) resulting in the most efficient element turnover.

Exact’s temperature sensors also monitor in situ strength and communicate with remote curing boxes to match the conditions to the heat of hydration of the mass concrete placements. As a result, project teams can observe and monitor the higher concrete temperatures at early ages and rely confidently on highly representative strengths to advance their most critical activities, such as removing formwork or loading the elements. This offers contractors more control over the curing/strengthening timelines resulting in optimal material use while achieving performance requirements without the added costs from having to apply additional heat during curing.

SCMs are commonly used in concrete mixes for everything from foundation walls to bridge decks. Percentages greater than 40 per cent are considered high volume use. Employing HVSCM not only results in more durable concrete that is less susceptible to temperature-driven compromise during hydration; it is also significantly better for the environment. Using SCMs to replace a large portion of cement in concrete mixes, significantly reduces concrete GHG emission intensity. Both fly ash and slag are common SCMs used in concrete mixes. Fly ash is a by-product of coal burning plants and slag derives from steel production, a by-product of removing impurities from molten steel.

As with all materials, the emissions intensity of any one concrete mix depends on the GHG emissions intensity of the individual components that comprise the final product. Emissions estimates presented in this article for the mixes used at ECLRT as compared to lower SCM replacement mixes are based on current best practices and industry average emissions rates for concrete components as published in the Canadian Ready Mix Concrete Association’s (CRMCA) Industry Average Environmental Product Declaration.

By using 70 per cent SCM, CTSC was able to avoid nearly 130,000 tonnes of CO2e as compared to using a mix with no SCMs. While all mass concrete mixes have some percentage of SCM to aid in temperature control, the impact of increasing the volume of SCM is still significant. For context the emissions reductions realized here is roughly the same magnitude as taking more than 28,000 passenger vehicles off the road for a year.

The use of concrete has been integral to the construction of buildings and infrastructure for a very long time. There have been advances in concrete mix methodology but there has been fundamentally little development in the constitution of the material overall. Due to the use of concrete in roads, bridges and major developments, material failure would create significant risks to human safety, as well as operational budgets and greatly disrupt day to day life for many. It is common for there to be resistance to making changes to mix designs, with unknown impacts to the longevity of the structures being created to avoid risk of early failure. Some of the more common concerns with the use of HVSCMs include durability tied to salt exposure for concrete on roads and bridges or slower strength gain which would impact overall project schedules and structure use. All these concerns arise because of lack of experience with minor changes to concrete mixes. However, the performance benefits, including emissions reductions, of HVSCM mixes are proven and, as a result, are being used around the world for various types of infrastructure. In the end, the benefits of HVSCM are significant and any associated risks can be mitigated, including the use of various in-situ monitoring tools and technologies.

As Canada looks to meet aggressive emissions reductions targets, finding ways to reduce emissions in the concrete we use to build our cities and support systems is critical. The industry as a whole is investing in process improvements, including new technologies, to drive toward zero emission material. In the meantime, utilizing high volume SCMs and accurate monitoring tools can help realize meaningful incremental reductions. Procurement authorities at all levels of government should focus on performance-based specifications that outline durability, structural criteria, stability, and Global Warming Potential limits, while encouraging innovation throughout the industry. This will encourage market adoption of tools that will ensure adherence to performance requirements while reducing GHG emissions.

Over the coming decade, the U.S. and Canadian governments are poised to commit nearly three-quarters of a trillion dollars to stimulus spending on large infrastructure projects, comparable to the scope and magnitude of ECLRT. If these projects employ HVSCM, the resulting environmental benefits will be staggering—estimated carbon savings roughly the same amount as taking about 1.7 million passenger vehicles off the road for an entire year. HVSCM adoption across major infrastructure projects globally will deliver more robust infrastructure to the world at a fraction of the environmental cost while also improving performance characteristics.