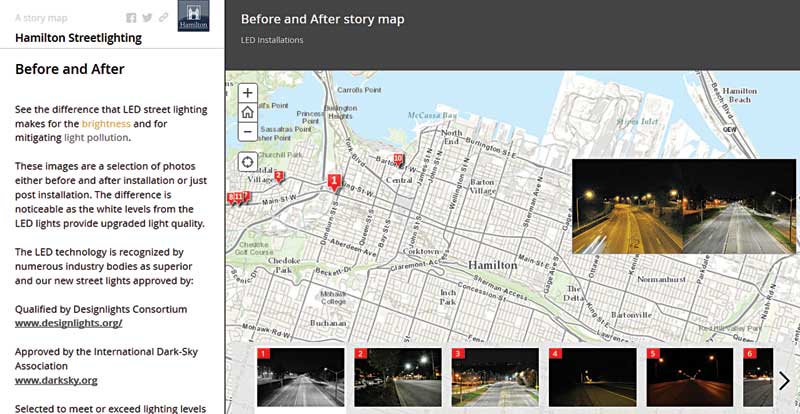 If you pass through the main streets of Hamilton, you’ll notice that street lights have become much brighter. The city recently completed an extensive street light retrofit project that replaced 10,000 street lights with energy-efficient light-emitting diode (LED) technology.

City council approved the street light conversion in December 2014 to take advantage of the $3.5-million provincial incentive offered by the Independent Electricity System Operator (IESO) through its SaveONEnergy program. Without the incentive, the project cost would have been $5.5 million. To qualify for funding, the city had to complete the work by December 31, 2015, to receive the funding.

In March 2015, the city awarded the contract to supply and install LED lights to Enersource Power Services—and the race was on.

Illuminating decisions through mapping
Hamilton has a strong background in leveraging geographic information systems (GIS), which are used to map and analyze various types of information. In 2013, the city began using Esri’s ArcGIS platform and completely revamped their online engineering records system using the technology the following year. The new system allows staff and partners, such as contractors and consultants, to access more than 200,000 municipal engineering records through an interactive online map. Recognizing significant efficiencies from leveraging the platform, the city used its GIS expertise to prioritize which street lights should be replaced.

The city selected several types of LED lights from General Electric for the project, which consume up to 60 per cent less electricity and are designed to function for more than 20 years without maintenance, significantly reducing the city’s annual operating costs. By replacing 10,000 HPS lights with LEDs, the city expects to reduce its energy consumption by the equivalent of 720 residential homes. This would result in an annual energy savings of more than $750,000—representing a 25-per-cent decrease in the city’s street lighting energy budget.

Enersource began installing the LED lights at the end of April 2015. They focused first on the Pan Am/Parapan Am Games routes, and then replaced lights on the city’s east and west ends. Within a month, Enersource had installed more than 3,000 fixtures, which exceeded projections. By September 2015, they had converted 10,300 lights.

Field inspections
As street lights were replaced, the city needed to inspect them. They had to ensure the correct type of LED light was installed at the right location before the work could be approved for payment. Traditionally, this would be done by recording information about the installed street lights on paper forms while in the field, then transferring the information to a spreadsheet or database so that it could be shared with the finance department.

Instead, the city used ArcGIS to develop a mobile app that allowed its inspector to log their location; capture photos, videos, and data on the retrofitted street lights; and update the data immediately to the corporate GIS. The information could then be displayed on an operational dashboard that provided the city’s public works team with a view of the installation progress. The city created the app by configuring Collector for ArcGIS—an app included in the ArcGIS platform—to suit their inspection workflow. With only one full-time inspector equipped with the app on an iPad, the city was able to inspect all retrofitted lights within five months (May to September), saving approximately one month of staff time.

Engaging citizens
While Hamilton has been piloting LED technology since 2009, this is the first time it has undertaken a city-wide conversion project of this scale. To keep stakeholders informed of the project’s progress, the city created the Hamilton Street Lighting Story Map (bit.ly/ledstory). The interactive map—created using a story map template in ArcGIS Online—incorporates various information, such as installation timelines, types of LED lights used, approved contractors, and amount of energy saved. The data is presented in different formats—text, infographics, charts, and slides—in one cohesive map journal. The map tells the story of Hamilton’s conversion project in a way that is easy to understand.

The street light conversion project was completed in September 2015, three months ahead of the December deadline, and the province approved the city’s grant application. Public feedback has been extremely positive: streets in Hamilton are now better lit and safer, while significantly reducing the city’s environmental footprint and energy costs.

Gord McGuire is a certified Ontario Land Surveyor and is the manager of geomatics and corridor management at the City of Hamilton.