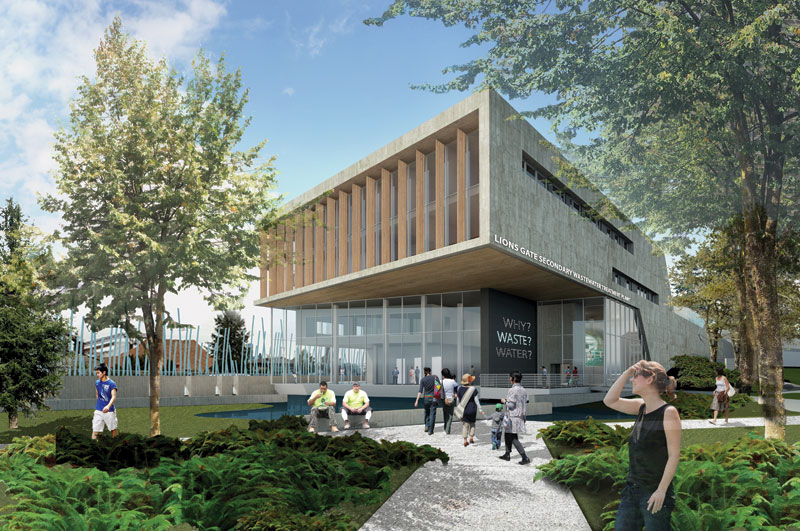 When Metro Vancouver began the indicative design process (IDP) for the new Lions Gate secondary wastewater treatment plant (No. 68 this year),one of the first things it did was engage a variety of different community groups and put together a public advisory committee.

The existing treatment plant has served the North Shore municipalities of West Vancouver, the City, and the District of North Vancouver with primary-level treatment for 50 years. Upgrading such infrastructure is imperative to keep pace with population growth for decades to come, as well as meeting requirements for secondary-level treatment set out by the new Government of Canada Wastewater System Effluent Regulations, as well as British Columbia’s new Integrated Liquid Waste and Resource management plan.

But due to a lack of developable land—an issue many urban centres are facing—Metro Vancouver honed in on a 3.5-hectare swath of former BC Rail land that is surrounded by a diverse mix of residential, commercial, and light and heavy industrial land in North Vancouver.

“By looking at the location, you can see that it’s very close to an established residential neighbourhood, and we knew that we wanted to work with the community so that any issues were addressed early on,” said Andrea Winkler, policy coordinator for Metro Vancouver’s public involvement with liquid waste and water services. “We also wanted to look at ways the plant could be positioned as a community asset.”

In late 2012, Metro Vancouver—a collective partnership of 21 municipalities that plans and delivers regional scale services—established the Lions Gate Public Advisory Committee (LGPAC), which was composed of 11 representatives and eight alternates that represented the local residential community, businesses, and the broader North Shore community that the facility would be serving. “We met with that group regularly throughout the process and they worked incredibly hard with Metro Vancouver,” Winkler said. “We came to them with key decision points and they provided input.”

But at the first public open house in early 2013, Winkler said it became apparent there were a number of people that wanted more detailed information and they wanted to be more involved. “So we created a community resource forum made up of about 40 members. We held workshops to go over more information on key decision points and get feedback.”

Metro Vancouver’s other intriguing strategic move was how it structured its design team. Rather than the traditional approach of having a big engineering team lead the way with subcontractors and consultants, it opted for a more integrated process delivery method. It attained about 12 prime contracts with a number of different entities—with the two largest being engineering and an architecture and community integration team.

AECOM and CH2M Hill made up the engineering team, while architectural lead Miller Hull Partnership put together a design team of sub-consultants that encompassed architecture, sustainability, landscaping, community planning, resource management, environmental, noise and acoustic controls, and public art programming. “We were all effectively working for Metro Vancouver. And 7Group lead the whole collaborative process,” said Scott Wolf of Miller Hull, a Seattle, Washington-based firm that specializes in sustainable infrastructure, and water, wastewater, and solid waste transfer stations that are integrated into communities.

To explore possible design options, nine concepts were created. “The purpose of that was to get out of the trap of looking for the perfect solution,” said Matthew Woodruff of British Columbia-based Local Practice Architect Inc., a part of the design team. “What the nine solutions forced us to do was create and explore alternates.”

The nine concepts, which demonstrated different architectural and community integration on the site, as well as nine different engineering trains, became a tool for Metro Vancouver to get feedback on the design from its various departments and the public. “There are a lot of different ways to accomplish wastewater treatment on the technology and engineering side, but these concepts allowed us to look at the pros and cons of the different solutions and work with the engineering team to map some of those treatment trains to the architectural concepts,” Wolf explained. From there, the teams took the strongest attributes from the nine models and established three concepts that were distinctly different development scenarios.

What emerged from this process, Woodruff said, “was that it leveled the playing field. Rather than having a big engineering firm control the process, all of these independent voices and the integrated design process opened the door for a more diverse way of thinking about the project.”

Once again, the best attributes of the three concepts were used to create the final indicative design. In comparison to more traditional campus-style plants, where chain link fences and trees are planted to keep people out, this urban design is inviting, compact, and energy efficient.

Renditions in the IDP report show how the facility flows. Wastewater enters the west end of the plant—where the solids are separated—and the water goes through primary and secondary treatment, becoming cleaner as it moves east toward the administrative end of the building, which has public engagement areas and a deck that’s accessible to the community. And to increase public engagement, renowned Vancouver artist Ken Lum developed samples of integrated art that conveys awareness and provides more details on Metro Vancouver and the importance of treating wastewater.

Park-like landscaping around the building and a low-profile modular facade that allows maximum natural light into the building makes it difficult to identify it as a wastewater facility. “If you look at the scale of the plant and the cost of developing this community amenity, the park and planting cost less than half a per cent of the total cost of the project,” Wolf said. “We think that was an incredibly smart decision and investment. It’s relatively modest, but the pay-off is huge.”

The indicative design also illustrates how the building divides rail lines and heavy industrial on the south side from the residential Norgate community and light commercial on the north side of the facility. This positioning has created an additional benefit, as it will act as a buffer between the two, decreasing noise pollution created by train shunting and rail activity that has been a long-time issue for the community.

The functionality of the plant is state-of-the-art, similar to what would be found in Hong Kong rather than North America. A co-generation system is incorporated to offset the facility’s electricity need, and by capturing heat from the effluent it will be able to feed into the district energy system. Paul Dufault, senior engineer from Metro Vancouver, said the plant will effectively be energy neutral.

“When this project went to the board of directors at the end of the indicative design phase, the vote was unanimous,” Wolf said. “I don’t think there’s ever been a project that the board has voted that way […] it was certainly a result of the engineering and expertise, but also a result of creating a very transparent and engaging process.”

Dufault said that the project is now moving into the design-build-finance phase, which they’re expecting to happen in the summer of 2015. “Request for proposals will be early 2016 and awarded at the end of the year. And construction will start 2017.”

The facility is slated to be operational by 2020, at which time Metro Vancouver will decommission and deconstruct the existing Lions Gate wastewater treatment plant.

This integrative design process was so intensely collaborative, roles became blurred at times, and the entire team—design and engineering—made contributions far beyond their individual areas of expertise. “We couldn’t have come up with this outcome any other way,” Wolf said. “Kudos to Metro Vancouver for trying something new and sticking their neck out for something nobody could point to. This was by far the most enjoyable process I’ve ever had on a project.”

For Metro Vancouver, the result is something that not only provides exemplary wastewater treatment, but also a streamlined process through community engagement and complete transparency. In fact, it has published the minutes from all of its public meetings on its website, as well as a complete IDP report. Winkler said, “When you engage the community early on, you will see the benefits over and over again.”

Noelle Stapinsky is a freelance writer based in Toronto.