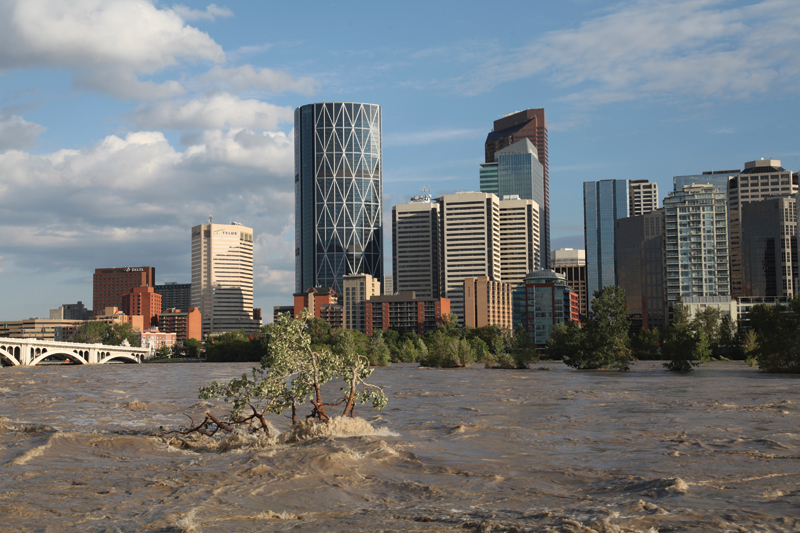 This year may well go down as the year of the flood. For people living along the Red River in Manitoba, and many other waterways across the country, overflowing banks are often a problematic rite of spring. But the flooding that gripped southern Alberta in late June dominated international headlines for weeks as downtown Calgary shut down and scores of people faced extended displacement and a clean-up of mammoth proportions. A few weeks later, a record-setting rainfall knocked out hydro transformers and subway and commuter rail lines in Toronto. These events seemed to serve notice that extreme weather is happening here and now, not in a distant future where there’s time for an ideological debate about the root causes of climate change. As flash floods, wind-packed storms, droughts and bouts of freezing rain increase in frequency and severity, Canada’s urban infrastructure is taking a pounding.

Electrical systems proved especially vulnerable during this year’s flooding. Ben LaPianta, VP of distribution grid management with Toronto Hydro, says the brief yet damaging torrent of rain Toronto experienced in July is becoming somewhat of a norm. “We’re seeing an increased frequency of smaller, more intense storms that blow for two to three minutes and leave 30,000 to 40,000 customers without power,” he points out. While provincial hydro equipment bore the brunt of the July storm, LaPianta says transformers, generating stations, and other pieces of equipment are aging and becoming vulnerable in cities across North America. “We were all built around the same time so our utilities consequently all suffer from relatively similar symptoms,” he says. “Vancouver has some different issues because it’s on the coast and suffers the effects of a very damp climate and salt and water spray from the ocean, but in general the downtown cores are identical, whether in Vancouver, Calgary, Toronto, Ottawa, or Montreal.”

Toronto Hydro is taking steps to address its aging assets. Capital investments are up from $50 million in 2006 to a forecast $380 million by the time 2013 draws to a close, and LaPianta says this is helping reverse a trend that saw the number and duration of outages increase a half decade ago. Toronto Hydro is also working with the city on long-term planning for adapting to climate change and extreme weather, and the Canadian Electrical Association is proposing changes to construction standards to handle anticipated weather extremes. LaPianta says relatively new smart-grid technology has also helped in emergency situations. Utility managers in central control rooms know automatically where power is out and can control switches and immediately identify distribution transformers that are overloading. LaPianta also wants to move sensitive underground equipment to higher locations less prone to flooding. “It would be cost-prohibitive to move them all at once,” he explains. “But I think that as these installations become due for rebuilding a lot of them will be moved.”

LaPianta isn’t alone. About a decade ago, Craig Applegath was developing the green healthcare practice at Dunlop Architects in Toronto when he began to worry about the grid’s reliability. In August 2003, more than 55 million people across northeast United States and most of Ontario lost their power after an alarm at a FirstEnergy Corporation control room in Ohio failed, leading to a cascading series of outages. Nearly a dozen deaths were attributed to the blackout, and it complicated many lives. Motorists navigated without traffic lights, fuel pumps stopped working, telephone and mobile networks overloaded, water systems lost pressure, and electrified public transit lines failed. “It made me realize how frail our various infrastructures were, certainly our public utilities such as power and water,” Applegath says. “Much of this infrastructure was built 40 to 100 years ago and it’s nearing the end of its useful life.”

Applegath soon found himself working within a modest-sized yet broad-based movement of architects, planners, and other professionals passionate about building resiliency. Now a principal at DIALOG, an integrated practice of architects, engineers, and planners, he developed a toolkit last year, Future Proofing Cities, to propose a game plan. One toolkit strategy, planning for growth and density, recognizes that most people live in cities and that dense urban centres consume one-third of the energy, water, and other resources per capita than do thinly populated suburbs. Energy performance, another touchstone, would maximize efficiency and reduce consumption in order to ease the impact of a sudden price hike or supply shortage. Local food production, through rooftop gardens and agricultural high-rises, would ensure survival should a crisis impede delivery from outside. The toolkit also promotes modularization, where utility systems can adapt and scale according to need. Integrated metabolism, a fifth component, would link these systems together so neighbourhoods and even neighbouring regions could help each other through a crisis. “It would function like the internet—a network of nodes interacting with one another,” Applegath says, describing a resilient grid as more decentralized, cooperative and secure than the conventional one. Finally, infrastructure and building fabric would be hardened to handle extreme events. “Most of the condos we’re building in cities across North America are clad in glass,” he explains. “A high-impact storm going through a city could gut those buildings.”

While Applegath acknowledges that public infrastructure is generally ill-equipped to withstand serious crises, he expresses confidence that planners and building professionals are beginning to get it right. Miami, for instance, requires new buildings be designed to withstand the impact of a hurricane. In Canada, Applegath points to Vancouver, which has taken steps to increase its population density in order to curb sprawl and maximize agricultural space in nearby rural areas which are squeezed between the Pacific Ocean and Rocky Mountains. By stepping towers back from sidewalks, Applegath says, Vancouver has achieved height while maintaining open, humane, and inviting downtown streetscapes. The city has also integrated pedestrians, bicyclists, and cars fairly successfully and engineered systems to reuse stormwater.

Yet, while these measures make Vancouver a relatively green city, Applegath sees greening as just a part of overall resilience. “They’ve got to think about things like power and food, not just density and the ecological aspects of the city,” he says, adding that Vancouver can nevertheless take comfort—cities across North America face similar challenges.

Jennifer Keesmaat, chief planner with the City of Toronto, used to work with Applegath at DIALOG and shares the passion for resiliency. While she acknowledges that Toronto has lots to do if it hopes to withstand future shocks and stresses, she says the city has some key infrastructural blocks in place. In particular, Keesmaat praises floodplain protection zones implemented after Hurricane Hazel drenched the city in 1954. “The areas that have been shaped by those planning policies did just fine in the [July] flooding,” she says, adding that the Toronto Green Standard and Green Roof bylaw have developers incorporating energy efficiency and greywater recycling into their plans. And while there’s more talk than action about badly needed improvements to public transit, she says it services the city well enough that ridership is increasing steadily, reducing commuter greenhouse gas emissions on a per capita basis.

“We have an urban structure that is a good backbone for fundamentally building change,” Keesmaat says, adding that what’s needed now is a shift in planning itself to consider future needs more holistically. She says her department is currently assessing its mid-rise guidelines with a view to taking some pressure off the downtown and spreading density to areas where services are already in place. Keesmaat has also helped establish a cross-departmental working group to “connect the dots,” as she puts it. Early results include a collaboration between city planners, the Toronto Parking Authority and Toronto Water to build a naturalized stormwater management system underneath a flower bed immediately adjacent to a parking lot in a neighbourhood prone to flooding. “The challenge,” she says, “is that we need a lot more.”

While infrastructure planners often address “hard” systems involving machinery, wires, and pipes, resiliency advocates see this as part of a bigger picture. Jeff Schnurr, executive director of New Brunswick-based Community Forests International, has planted more than his share of trees and worked with communities around the world to adapt to climate change, and he says healthy natural systems not only in rural and suburban areas but also within cities themselves are vital assets. “Urban green spaces are the first line of defence against things like flooding,” he says. “They sequester a lot of carbon, and they provide an opportunity for people living in an incredibly dense, urban environment to actually see some of natural Canada first hand.” Experiencing nature is important, he adds, because it helps increase awareness about services such as clean water and carbon cycling which natural environments provide. “These are things that allow us to live, work and breathe, and they’re not on a lot of peoples’ radar. That needs to change.”

There’s also demand to address what Pamela Robinson, an associate professor of planning with Ryerson University in Toronto, calls “soft” infrastructure—generally low-tech, localized, and often interpersonal systems. In Venice, Italy, for instance, garbage waiting outdoors for collection is placed on hooks because water levels can rise quickly and potentially wash it away. “It’s an example of how people in a place that’s vulnerable to high-water intrusion on an ongoing basis create low-tech, household and neighbourhood-level adaptations,” she explains. Soft infrastructure can also include neighbours looking out for one another, with particular care for those who might be vulnerable. “How do we scale that up at the city level,” she asks, “so that we each think about what we can offer in the case of an unexpected event and who might need help? We haven’t really had these kinds of conversations, but they’re an important part of adaptation and resilience.”

Ultimately, Robinson says, no single kind of infrastructure, alone, can solve the problems we face. She believes a sound strategy of resilience must consist of overlapping systems. “A well-woven system of hard, soft, and green infrastructure will allow us the redundancy we need to create resiliency in uncertain times.”