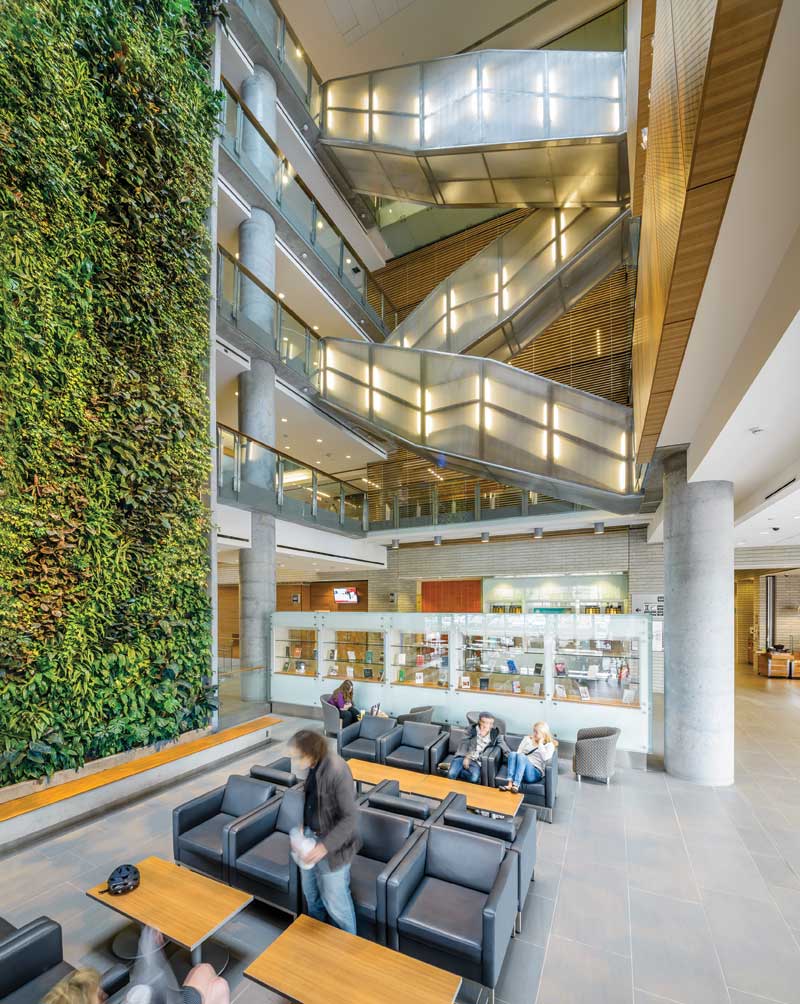 During the past decade, new thinking has emerged regarding trees and other forms of living “green infrastructure,” such as wetlands, bioswales, green roofs, and green walls. We have moved beyond their aesthetic appeal toward a better understanding of why it matters—and why it should count.

A large body of scientific literature has shown that green infrastructure provides many services, from cleaning the air and reducing the flood damage by capturing, storing, and evaporating rainwater to sequestering carbon and saving energy around (and on) our buildings. Living green infrastructure can lead to stronger and healthier communities through parks and community gardens, which are increasingly growing food on rooftops. Green infrastructure also provides much needed food, nesting, and resting places for migratory birds and insects.

Furthermore, researchers have begun to understand the neuroscience behind how the presence, or absence, of green infrastructure in our surroundings directly impacts our mental and physical health. The concept of “biophilia”—our natural affinity for nature—is proving to be hardwired right into our very DNA. Having daily access to nature, natural light, water, and other natural elements, it turns out, is critical to our well-being. Biophilic theory and science is the foundation of a new approach to planning and design, one that seeks to improve the human experience of buildings and communities by using well established biophilic elements like water features, the use of fractal patterns, and vegetation.

A review of the scientific literature in 2015 conducted by the David Suzuki Foundation, Eco-Health, and the Greenbelt Foundation found that green infrastructure provides significant health benefits to people, ranging from reductions in particulate matter (such as NOx and VOCs) to reducing the urban heat island effect. The presence of (enough) street trees reduces stress and can increase life expectancy.

Our growing understanding of the benefits of green infrastructure has also led to considerable research to understand its economic impacts. Hedonic studies that use empirical analysis to compare the prices of identical properties consistently find significant increases of five to 30 per cent for those located adjacent to parks, ravines, and valleys. In some cases, the inclusion of accessible green roofs on multi-unit dwellings has generated property value increases that are even greater than the costs of installing the green roof. Over the long term, local governments can benefit directly from green infrastructure investments that yield greater property taxes based revenues by raising property values.

In urban forestry, the development of analytical tools like i-Tree Eco have been instrumental in encouraging local governments to better understand the economic benefits provided by trees and shrubs growing in a city. A 2014 study by the TD Bank Economics Group of the urban forest found (see bit.ly/tdtrees) that the 10 million trees in Toronto’s parks, ravines, and streets are a critical factor in environmental condition, human health, and overall quality of life. The study states that “an investment in urban forests is an investment in the overall economic and environmental well-being of urban society.” The authors concluded that Toronto’s urban forest provides residents with $80 million in annual benefits and that, for every dollar spent on maintenance, the urban forest generates $1.35 to $3.20 worth of annual benefits. The structural value alone of Toronto’s urban forests is estimated at $7 billion.

The enormous amount of shading and cooling provide help to reduce the urban heat island effect, which in turn, results in significant energy savings related to the reduction in air conditioning demand. As climate change scientist project rising temperatures and more heat waves, green infrastructure provides natural air conditioning for the outdoors. Topics like this will be covered at the Grey to Green Conference from June 2 to 3, 2016 (greytogreenconference.org).

A similar type of study in London, Ontario in 2012 states that the urban forest can be compared to a bank account, with the trees and their structural value as the principal or natural capital, and the annual interest returned as the ecological goods and services. The estimated 4.4 million trees in London have a replacement value of $1.5 billion and provide $10.7 million in ecosystem health, $4.5 million in human health, and $1.7 million in energy conservation annually.

York Region incorporated street trees and parks in their State of Infrastructure Report for Environmental Services report in 2013—even though they are not recognized as capital assets under Ontario’s Ministry of Infrastructure asset management requirements for local governments. Ian Buchanan, manager of natural heritage and forestry in York Region, said urban forests are now part of their asset management strategy and work plans. “Recognizing green infrastructure as a capital asset allows us to leverage opportunities for new policy development and spending,” he said. “Having an inventory of green infrastructure assets also helps prepare us for the impacts of severe storms, which can devastate tree populations overnight, or infestations such as the Emerald Ash Borer which may reduce our forests by as much as 10 per cent in the coming decade.” The scale of these threats to green infrastructure is significant. The projected impact on urban forest structural assets in just Toronto and Oakville, from the Emerald Ash Borer in 10 years will be over $1.5 billion dollars in losses.

Buttressing the progress made by urban forestry to making green infrastructure count is the creation of stormwater utilities. Charging stormwater fees based on the level of imperviousness of a property owner’s roofs, walkways, lawns, and parking lots provides a direct incentive to implement green infrastructure for stormwater management. It also requires these jurisdictions generate a detailed inventory of land use and buildings, allowing them to track and report on green infrastructure assets. Victoria, British Columbia and Mississauga, Ontario are the latest Canadian jurisdictions to separate stormwater and water supply fees, and adopt a user-pay approach to stormwater.

Many neighbouring jurisdictions to the South, driven largely by the U.S. Clean Water Act, are implementing green infrastructure technology as a means of complementing or, in some cases, downsizing or replacing the traditional “grey” infrastructure approaches to capturing and treating stormwater. New York also has a grant program that provides 100 per cent of the funding for a green roof, provided the building owner signs a convenant to ensure it will remain in place for 20 years.

Green infrastructure investment programs can also leverage private investment—a strategy Toronto is employing. The City of Toronto’s Eco-Roof program provides existing building owners with $75 per square metre for a green roof, the balance to be paid by the building owner. This has resulted in more than 100 new green roofs in the city thus far. In 2014, Washington, D.C. broke new ground by establishing a stormwater credit exchange system that provides building owners with tradable credits based on the amount of stormwater they are able to retain on site. The system is the first of its kind in the United States, designed to promote voluntary green infrastructure implementation for stormwater management.

The development of these and other user-pay approaches to stormwater management has the effect of recognizing that green infrastructure is a type of public utility. In order to justify green infrastructure investment, public utilities and other policymakers have to ensure the benefits they are seeking—reductions in peak stormwater flows—will be realized. The City of Philadelphia, which has significant combined sewer overflow challenges that cannot be cost effectively met with grey infrastructure, is working to implement a 2011 plan (Green Cities, Clean Waters) that will see $2.4 billion invested over 25 years with a goal of capturing 85 per cent of the combined sewer overflow.

Steven W. Peck is the founder of the Green Infrastructure Ontario Coalition and the founder and president of Green Roofs for Healthy Cities.