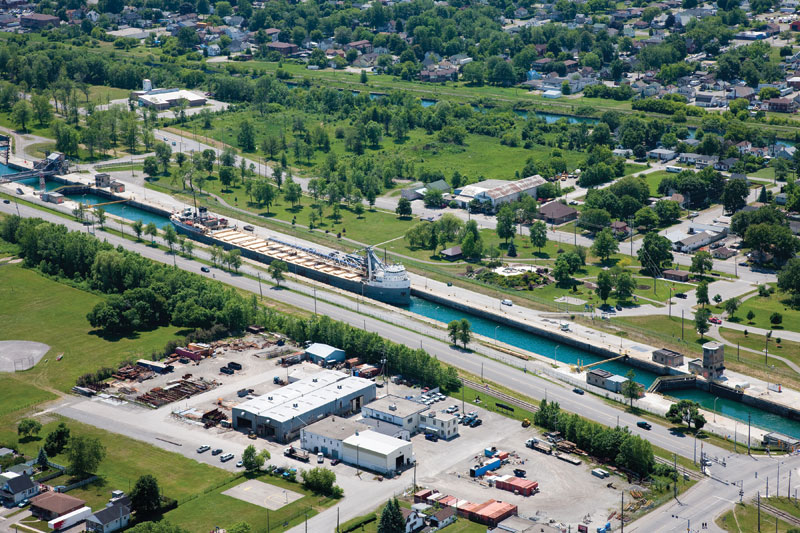 The series of investments include more than $1 billion in orders for new Canadian domestic and ocean-going ships—the most significant renewal of Great Lakes fleets in 30 years—and bi-national government funding of close to $600 million to modernize the St. Lawrence Seaway. This is the world’s longest deep draft inland marine highway, stretching 3,700 kilometres from the Atlantic Ocean to Lake Superior.

Manufacturers, mining companies, energy suppliers, farmers, construction firms, and cities use this corridor to receive and export more than 160 million tons of raw materials and finished products each year. The cargo handled by ports along the system generates $35 billion in revenues and supports 227,000 jobs in Canada and the United States.

“What’s really significant is that you are seeing both the private and the public sectors investing in the future of marine transportation in our North American heartland,” says Stephen Brooks, president of the bi-national Chamber of Marine Commerce. “If Canada and the U.S. are to remain competitive in this ever-changing global economy, we need to have the most efficient and sustainable transportation network possible. Investing in marine shipping goes a long way toward achieving that goal.”

The St. Lawrence Seaway, a series of 13 Canadian and two American locks that connects the lower St. Lawrence River to the Great Lakes, is currently undergoing its biggest facelift in five decades.

The St. Lawrence Seaway Management Corp. (SLSMC) is investing $500 million between 2014 and 2018 to modernize its locks and structures, which are owned by the Canadian federal government. Likewise, the U.S. Saint Lawrence Seaway Development Corp., a federal agency within the U.S. Department of Transportation, plans to spend $91 million on 44 projects for its two locks over the next five years.

The Canadian plan encompasses a variety of projects, from modernizing and repairing lock structures, gates, and valves to rehabilitating bridges, wharves, and docks. Within the plan, the largest outlays cover the installation of hands-free mooring equipment, and the replacement of tie-up walls in the Welland Canal that were originally built in the 1960s.

The Canadian and U.S. Seaway corporations are installing state-of-the-art hands-free mooring units at all high-lift locks. Each lock’s complement of three double-pad units reach out and secure the vessel with vacuum suction technology, while it waits for the water level in the lock to rise or fall, eliminating the use of tie-up lines.

Terence Bowles, president and CEO of the SLSMC, explains the benefits: “Hands-free mooring will enable us to increase our operating efficiency, and thus enhance our system’scompetitiveness. In addition, this technology will create a safer workplace for all concerned, and lead to faster lockage times. Last but not least, we will be able to attract more vessels from the world fleet, given a reduction in the need for Seaway-specific fittings.”

Between 2012 and 2014, Canadian domestic ship owners and international ocean carriers have also ordered 32 new ships that will sail throughout the Great Lakes-Seaway system and are faster, cleaner, safer, and more efficient. The vessels are predominantly being built in Asia due to capacity, technical, and cost considerations. Examples of a few of these projects include the following:

“These investments are part of the collective effort that’s going on to improve the entire inland marine shipping system,” Brooks says. “Ports and terminal operators are building new rail spurs, expanding docks and loading capacity. We urge everyone to keep an eye out for a new report we will be releasing later this year that really captures the scale of development happening in Canada and the U.S.”

Julia Fields is the communications manager with the Chamber of Marine Commerce.