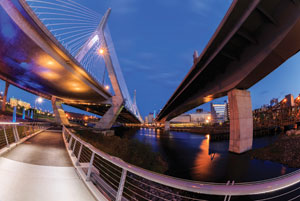 Congestion—and how to get rid of it—has been challenging cities for much of the modern era. In 1982, Boston decided to go ahead with one of the most complex technological projects of its time: the Central Artery/Tunnel Project, commonly referred to as the Big Dig. This replaced the over-capacity, deteriorating six-lane elevated Central Artery (Interstate 93) highway with an eight-to-10-lane underground highway and two new bridges over the Charles River. To accomplish this, there were 118 separate construction contracts, with 26 geotechnical drilling contracts, and an underground utility relocation program that moved 47 kilometres of gas, electric, telephone, sewer, water, and other utility lines (maintained by 31 separate companies) while also installing more than 8,000 kilometres of fibre-optic cable and 320,000 kilometres of copper telephone cable.

Now a professor at Boston University, Greiman has just published a book, Megaproject Management: Lessons on Risk and Project Management from the Big Dig. In it, she examines what Boston’s experience teaches about developing a risk management program. Her key lessons for successfully managing risk are all people-centric: the need to have the right people in the right place with the right incentives and the right tools and resources, and all working collaboratively toward the same vision.

Gather expertise
“Intuition is hard to define, but you know it when you see it,” Greiman said at a recent seminar in Toronto. “It’s experience. It’s someone that has done something right so many times they know instinctively when things aren’t right.” The depth of expertise that leads to intuition is a valuable asset, whether for project decision-makers responsible for planning; core managers in the insurance, quality assurance, utilities, and claims and changes programs; or technical staff and contractors. The Big Dig drew on engineers and underwriters who had hundreds of years of combined experience on tunnelling projects , as well as thousands of other workers at all levels.

Matthew Bennett, a project manager in the water division at the Region of Peel, was also adamant that value should be placed on expertise and experience when coming up with project risk-reduction measures. He is currently working on the Hanlan Feedermain project, the largest and most extensive watermain Peel has ever designed and built. It consists of installing two major watermains: the Hanlan Feedermain (2,400 millimetres in diameter), which will carry water from Lakeview Water Treatment Plant to the Hanlan Reservoir and Pumping Station, and the Mississauga City Centre Subtransmission Main (1,500 millimetres in diameter) that will connect the Hanlan Reservoir and Pumping Station to the Mississauga city centre core.

Peel prioritized reduction measures by structuring the overall project approach to incorporate requirements for feedback and input throughout every stage (request for proposals, design, construction),not just at the end.

In the request for proposals, for example, Peel specified the team should have a budget specialist to peer-review cost estimates, as well as someone to perform a detailed subsurface utility engineering (SUE) investigation. These were areas that had been challenges in past projects, and the benefits of having this work done properly up front were worth the costs.

“During the design process, we wanted to draw on contractors’ experience, not just our own,” Bennett said. “They’re the ones that do it—we manage them, we inspect them, but they’re the ones that do a lot of the work. We wanted to bring them on board at the design level to make sure that we drew on their expertise and experience before, not after.” To achieve this, each consulting assignment was required to have three value engineering sessions, which he said was one of the best places they spent money on. The value engineering provided them with better quality tender documents and pricing, and it also provided the platform to balance global expertise with local knowledge and experience.

Greiman also emphasized the value of secondary reviews, saying she found audits to be tremendously helpful in exposing unnecessary levels of risk. One significant revelation for her was that they had too many procedures at one point—it was impossible for them to follow all of them. Audits were also useful for showing where there were systemic problems, whether it was rising costs, schedule delays, safety violations, loss time increases, growing claims, increasing exposures, or ethical problems.

Resource and incentivize
Once you have the right people with the right knowledge, they need to be properly set up to help you manage risks.

Bennett said that with the greater emphasis on utilizing the experience of contractors, Peel also tried to share, rather than download, all of the risk in order to create a more cooperative contracting environment and to put the contractors in a better position to perform at full capacity. By taking steps like identifying risks along the potential route, Peel was able to better define higher-risk areas in contract documents. These higher quality documents subsequently attracted more favourable  bid pricing.

“A lot of the times in the past, by downloading all the risk, we did not put contractors in the best position,” he said. “They operate in a very competitive marketplace where they are forced to take risks. The more we can do as designers and as project managers to set them up for success, the more you set the project up for success.”

Figuring out how to create effective incentive programs for those who have the most responsibilities in high-risk areas is also important. For the Big Dig, this meant health and safety programs that encouraged workers to be safe, and to do things right every single time.

Workers were rewarded with the cost savings obtained through a very low loss ratio every six months, and Greiman said that not only were these programs instrumental in saving lives but also served to create discipline on a project that could not have survived without it.

Establishing these incentives within the right structure is also key.“I know we worry a lot about cost and schedule,” Greiman said. “But your basic structure of your project is really the key to your success in terms of risk management. If your organizational structure, your governance structure, and your contractual structure is not done properly, you will have great risk in your project.”

She pointed specifically to structural weaknesses that create competition or a lack of alignment in incentives as a danger. The biggest challenge was in ensuring that, when addressing risks, all the parties were in agreement on the goal and the ultimate vision. The integration of all programs helps to enable this, and the Big Dig integrated everything—from quality assurance and utilities to insurance—into its risk-management program.

United endeavours
In the same way that risk management needs to be integrated into all aspects of the project, the long-term vision and its accompanying values need to guide all decisions. Arriving at an agreement on what the true vision is and what project success looks like is critical. “We shouldn’t have to barter in the middle of a project. We should know exactly what our values are and what is most important to us,” Greiman said. “Is it being on time? Is it being on budget? Is it meeting our goals? Is it achieving sustainability? And what takes priority?”

Ultimately, the Big Dig resulted in reduced traffic congestion and improved mobility in one of America’s oldest cities. In addition, it helped improve the environment by reducing emissions, knit the neighbourhoods back together, set the stage for redevelopment and economic growth, and created new parks and open space where the highway used to be. The excess soil from the tunnelling was also used to cap landfills, creating a new park on Spectacle Island in the harbour.

This was all part of the ultimate vision for the project—but safety was the priority. However, even with an extensive focus on managing safety, the desired outcomes were not always achieved. After the project was completed, a ceiling panel in one of the tunnel segments collapsed and killed a civilian car passenger. The investigation revealed the wrong type of epoxy system had been used to hold up the panels. A settlement was reached, and the tunnel ceiling was replaced. While the loss was devastating, the projected losses at the project outset based solely on labour hours worked had been 52 fatalities. Compared to this estimate, the safety programs had prevented what could have been many more injuries or lost lives.

In addressing the fatality, Greiman stressed the need to assess whether, upon completion, projects are safe and contributing to a sustainable legacy. “Sometimes I think we get lost in the fact that we’re really building something for the future and we want that to have a (positive) impact,” she said.

While it is still too early to know the outcomes for the Hanlan Feedermain, Bennett said the size of the job has allowed the project team to try new ideas and to draw on the expertise of new people. Peel will be sticking to the values that have guided it so far: the pursuit of quality and a fair and balanced sharing of risk that creates a more cooperative contracting environment.

Marcus Weeks is the manager of linear infrastructure with GHD in Toronto.