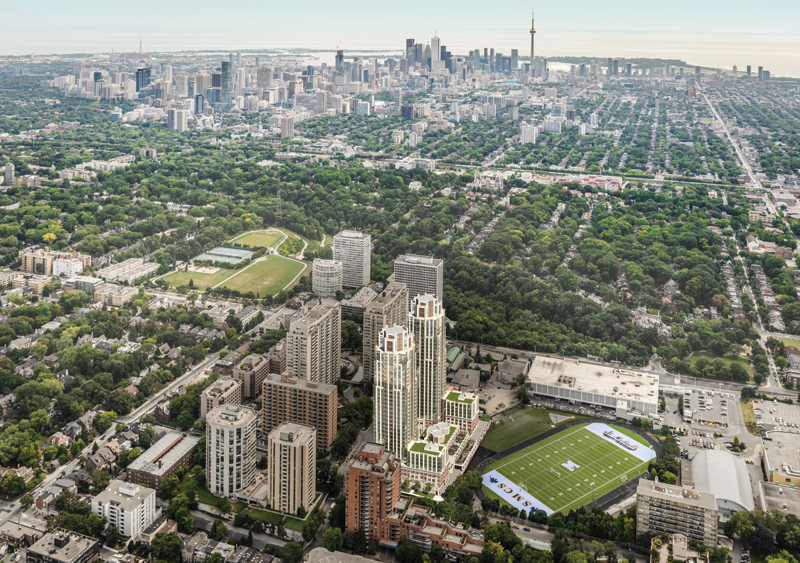 Melanie Belz and husband Michael sold their house and are moving into a two-bedroom apartment in Toronto’s upscale Forest Hill neighbourhood this fall. For a couple accustomed to owning their own home, moving into a typical downtown apartment would have been tough. When they found the Heathview, Morguard’s new luxury rental project, there was no question this was the space for them.

“The green roof was something that attracted us,” Belz said. “With this move, we’ve lost our backyard and all the benefits that come with it, such as a place to sit outside and read, go have a drink, and enjoy the sun or a place to barbecue.” The Heathview has two green roofs, one atop a parking garage and another accessible green roof on a seven-storey wing to the project’s two towers.

But that’s far from the norm. As of 2012, about 135 buildings in the Greater Toronto Area (GTA) had green roofs, with around that many under construction—not overly impressive when you consider that Toronto has nearly 50 per cent more high rises under construction than New York City.

A healthy share of that tower construction is residential. Development is currently underway on around 55,320 condo units in the GTA. Some of those units are in boutique low rises where developers are incorporating sustainable elements to please young, urban buyers. Like Morguard’s Forest Hill development, Triumph Development is installing several small green roofs at the new Residences in Roncesvalles Village.

Organizations such as Green Roofs for Healthy Cities (GRHC) have been touting the environmental and economic benefits of green roofs for more than a decade. The City of Toronto has responded with some very progressive green standards, including a bylaw passed in 2009 requiring green roofs on some new developments. But the majority of tall slender condo towers—the type of project contributing most of those 55,320 units—are exempt from the bylaw. And if they’re not exempt, developers can buy their way out of the requirement.

“The payback depends on the length of time an organization considers reasonable for a return-on-investment,” Steven Peck, president of GRHC, said. “So it’s very hard to say definitively what the economic benefits are.” The exact payback for a developer on a green roof also depends on the context for the development. “But there are many other reasons to build a green roof,” he added. Chief among them is reducing costs associated with processing stormwater runoff, energy savings from the cooling potential of vegetation cover, and better air quality from the reduction in carbon dioxide and increased production of ozone.

For Morguard, it’s primarily about tenant comfort. “Our project was in the pipeline before [the city’s] green standards came into effect,” said Brian Athey, VP of Canadian operations for Morguard North American Residential REIT. “Once [the new guidelines] came out, we did look at making some changes, but our corporate policy already mandates that we consider all the efficiency and sustainable design features possible for every project.”

Morguard isn’t alone. The majority of the Toronto buildings under construction now will have been in the pipeline long before the city’s green roof bylaw came into effect—the bylaw applies to building permit applications for new commercial, institutional, and residential developments made after January 31, 2010.

Toronto’s limited bylaw
When Toronto adopted the green roof bylaw, it became the first city in North America to have any such legislation. Adopted by Toronto city council in May 2009, under the authority of Section 108 of the City of Toronto Act, it’s a truly progressive policy—but it has its limitations. The green roof bylaw applies to any commercial, institutional, or residential building with a gross floor area of 2,000 square metres or more. That lets out a lot of tall, skinny towers—the city mandates that those developments can occupy no more than 800 square metres. With that small footprint, there’s little space for a green roof. “By the time you’ve made room on the roof for required mechanical space, window washing equipment, et cetera, there’s not a lot of room up there,” Athey said.

Morguard’s solution was to design a green roof for the building’s parking structure rather than for the rooftop itself. The added benefit of that approach is access. Tenants will have access to the roof at grade. “It’s more than just a green roof; it’s been designed as an external courtyard so the tenants will have a common area,” he said. The second green roof, installed on a seven-storey wing to the Heathview, will create a pleasant view for tenants living above the roof and minimize heat sink, benefiting those who live below the roof.

“The group that was most vocally opposed to the bylaw is the industrial sector,” Peck said. “They’ve argued that the proportional cost of doing a green roof is great relative to the actual cost of doing the building.” A warehouse, for example, is very inexpensively created—it’s basically steel structures with a concrete foundation and an inexpensive building envelope. “The cost to put a green roof on one of those, relative to the cost of overall building, would be very high,” he said. He estimates it would run the developer anywhere for 20 to 40 per cent of the total construction cost. They argued and got exempted from the bylaw. Peck said if it was up to him, the city wouldn’t have caved so easily.

The smart developers won’t opt out
Peck argued that developers who embrace the green roof bylaw will realize a significant return on investment (ROI) if they’re smart about how they design and build the green roof. He suggested tapping into city-funded incentives to make hay with green amenities.

“A good example is the green roof installed on City Hall, which turned a desolate rooftop terrace doing nothing of value for the city into a park,” he said. “If you had to purchase that land to create a parkland like that, it would cost you tenfold more money invested in the green roof.” A project like that counts as an amenity, which makes it eligible for a handful of city funds.

“Developers bound by the bylaw that have done the minimum and built the [cheapest]possible green roof that is not accessible or viewable won’t realize that same ROI,” Peck said.

On the opposite end of the spectrum, landlords like Crown Property Management who’ve embraced the possibilities of a green roof are reaping the rewards. In 2009, it installed a removable green roof on a nine-storey office building in the Toronto suburb of Don Mills for tenant Esri Canada. Esri Canada qualified for a grant to cover partial costs of building the green roof under the Toronto’s Eco-Roof Incentive Program for Green Roofs. The green roof reduces Esri’s heating and cooling costs and retains up to 75 per cent of summertime precipitation, ultimately reducing sewer overflow. But the less tangible benefit is a relaxing, green environment for its employees.

In the future, perhaps more companies would demand the same. If more tenants like Belz are willing to pay a premium for green amenities, more developers and landlords may see the benefit of building them.

Mira Shenker is principal of Toronto-based consultancy No Semicolon Communications and a marketing consultant at B+H Architects.

Integration of Hatch and RobertsDay advances expertise for urban environments