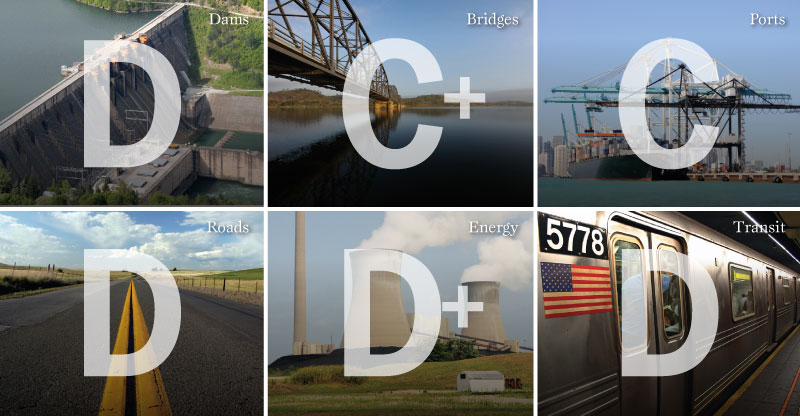 As public dollars become scarcer, the next generation of American infrastructure will require the public, private, and civic sectors to engage and partner in new ways. From private investments in telecommunication systems, broadband networks, freight railroads, energy projects, and pipelines, to public investments in transportation, water, public buildings, and parks, infrastructure is the backbone of a healthy national economy.

Despite infrastructure’s fundamental role in maintaining national growth and economic health, the United States has underinvested in its infrastructure for decades. Today, infrastructure spending as a share of U.S. GDP is around 2.5 per cent, much lower than Europe’s five per cent figure and the  3.9 per cent in peer countries, such as Canada, Australia, and South Korea. The McKinsey Global Institute estimates that the United States should spend at least an additional $150 billion a year on infrastructure through 2020 to meet its needs.

The federal government has not taken the actions required to reinvest in infrastructure, and in many cases, these infrastructure projects are the purview of state and local authorities. For the foreseeable future, federal support for infrastructure programs, such as the Highway Trust Fund and State Revolving Funds for water, will likely continue to face cuts and budgetary shortfalls. Competition for limited resources is fierce.

So what does all this mean for how America designs, finances, delivers, and governs its infrastructure?

It means almost all solutions will have public and private elements. The United States should endeavour to move beyond simplistic notions of “privatization” to a future of infrastructure with true partnerships between government agencies, private firms, financiers, and the general public. This is how many nations, such as Canada, successfully develop infrastructure today. But south of the border, the nature and mix of public and private arrangements will likely be customized depending not only on individual transactions, but also on the nature of the particular sector.

For some sectors like intra-metropolitan transportation (roads, bridges, and transit), we expect the lion’s share of revenue will need to be raised by public means or through innovative market mechanisms. But there are other infrastructure classes and projects that we believe are potentially appropriate as public-private partnerships (P3s), which can take a wide range of forms, but, at their heart, include risk and cost sharing in the design, building, maintenance, financing, or operations of an asset.

There is no doubt that public sector interest in these new partnerships is motivated by the funding and financial squeeze. In the post-recession United States, low-credit ratings, debt caps, and limited options for credit enhancements continue to burden many states and localities with high debt costs. While P3s are not “free money,” they can offer cities a range of benefits including lifecycle cost savings, increased budgetary accountability, higher quality deliverables, and faster project delivery.

However, not all infrastructure sectors or projects are appropriate for such risk/reward sharing arrangements between the public and private sectors. Some investments may not be profitable enough for the private sector, though they may meet a host of public policy priorities, such as certain green infrastructure or public parks without a revenue stream.

Strong candidates for successful P3s typically need stable policy environments and strong political leadership, clear and defined responsibilities for the partners, and data to support financial planning and usage projections. They must also be large enough in scale to attract private sector interest.

Since there are no standards for contracts and pricing, risk sharing, and returns, a mix of public, private, and civic groups will likely have to help develop the models for this new path forward for infrastructure. An emerging example is the West Coast Infrastructure Exchange (WCX), a collaborative effort between California, Oregon, Washington, and British Columbia to create a pipeline of investable projects and develop standards for important factors, such as transparency, contracts, labour and risk allocation, among others. The overarching goal is to build an organic marketplace of projects and to create a platform from which public, private, and non-profit partners can learn. By sharing these details in a transparent and accessible manner, project finance and delivery methods can be scaled and replicated. For example, a Mid-Atlantic Exchange may focus on infrastructure needs related to rebuilding coastlines and climate resiliency post-Superstorm Sandy, and a Great Lakes Exchange may home in on transportation projects that cross state or national borders. (For more on Canada-U.S. infrastructure investments made along the Great Lakes, read “On the Marine Highway.”)

Other sectors of infrastructure, such as energy, telecommunications, and freight rail, will likely remain dominated by the private sector, typically with federal and state regulatory oversight. But we expect there will also be new types of public and private relationships in these sectors. For example, while broadband networks are still delivered by private sector companies, local governments recognize that network access is equally important to the economic success of households as well as businesses.

Regardless of the funding arrangement, it is clear that projects are getting more complex. There is no universally ideal mix of funds; it depends on the specific time and place and the particulars of each project. The level of private engagement would depend on market and business opportunities. But in the end, traditionally public-funded sectors like water and transportation are including more private interests while private sectors like energy and telecommunications are exhibiting public attributes.

In this way, the different sectors of infrastructure come together in an integrated manner as metropolitan areas implement and replicate tailored strategies that promote productive, inclusive, and resilient economic growth.

ABOUT US
Thousands of Canada’s infrastructure key players and policymakers turn to ReNew Canada for exclusive, insightful content to help them build resilient public assets. Along with coverage of all main sectors and regular columns on legal and financing trends, each issue explores timely news, best practices, and focused roundtables.
FOLLOW US
© Copyright 2020 ReNew Canada
X