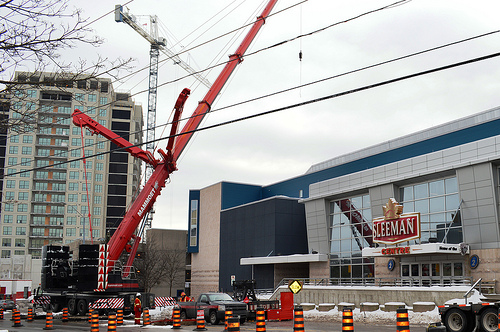 The world is in a period of growing energy insecurity, and municipal and business leaders are focusing attention on improving the energy resiliency of their towns and cities. Compact communities that integrate a diversity of land uses, densities, and urban forms enhance the opportunity for district energy. Interestingly, these characteristics are also foundations of great planning, providing the density to support sound public transit investments and reduce suburban sprawl. A diverse and compact community provides residential, civic, retail, cultural, and entertainment facilities, all within easy, walkable distances.

Together, with community-based energy systems like a district energy network, municipalities can create high-quality and attractive places to live and work. Energy can be a significant driver for the health and welfare of residents, the growth of business, and the energy stability for communities of all sizes. The growing cost of traditional energy arrangements, the risk of increasingly volatile and frequent weather events, and the need to incorporate a variety of fuel sources are focusing attention onto local energy opportunities. Cities are continually competing in a globalized economic arena for high-quality employers and the ability to attract and retain intellectual capital. Recent extreme weather events in Calgary and Toronto have highlighted the costs associated with business interruption, and employers are seeking more reliable and resilient energy systems to hedge against these risks.

What is district energy?
District energy consists of a network of underground pipes carrying hot water, steam, or chilled water from a central plant to the buildings using the service. Many established district heating projects in Canada use steam as the carrying medium, while new developments tend to use hot water. There are pros and cons to each approach, which are typically determined by local conditions. The heat supplied to buildings can be employed for space heating or domestic hot water, or converted to chilled water for cooling.

District energy networks offer a complementary infrastructure to other energy networks. They can utilize a variety of fuel sources, both fossil and renewable, such as natural gas, oil, biomass, geothermal, large-scale solar thermal, and waste-to-energy. In many cases, this can be leveraged to keep energy dollars in the local community. These networks are also able to capture and distribute surplus heat from industrial processes and power generation that would otherwise be wasted. Heat networks aggregate the thermal demand of multiple buildings to a scale that enables the use of technologies with higher efficiencies, or ones that may not be economical to deploy at the individual building level, such as biomass, waste-to-energy, or combined heat and power (CHP), also known as cogeneration. While natural gas has been, and is likely to remain, the preferred fuel choice in Canadian urban areas due to increased availability and favourable emissions profiles, many CHP plants can operate on a variety of renewable fuels, such as municipal waste, landfill gas, and digester gas. For rural communities, the local availability of bio-derived fuels has made these fuels the principal choice.

A major part of the cost of a district energy system is the distribution system and the pipes needed to carry the thermal energy. The shorter the distance energy has to travel, the lower the cost. The more densely packed the buildings, and the greater the demand for heating or cooling, the more efficient and viable the network is likely to be.

Local opportunities and resources
Thermal energy can be transported over long distances. Major district energy networks in Europe (Paris, Berlin, Copenhagen, Stockholm, and Helsinki) extend more than 50 kilometres in length. Established district energy networks are found in the central business districts of larger cities, such as Montreal, Ottawa, and Vancouver, and are growing in communities like Guelph and Markham, Ontario. In Toronto, the district energy system has a grid network of more than 42 kilometres of underground piping supplying 522 megawatts (MW) thermal equivalent of heating capacity from three gas-fired steam plants, and 72,000 tons of cooling capacity, sourced primarily from a deep lake water system. Toronto’s district heating system services more than 150 buildings in the downtown core and the cooling network serves more than 60 buildings.

However, district energy systems can be deployed in smaller towns, campuses, and planned developments, where the density of thermal energy demand is sufficient to support the commercial development of the infrastructure. Since the central production and distribution of thermal energy are inherently local activities, district energy helps communities identify opportunities to deploy local resources, such as biomass from forestry (particularly in rural communities), tree clippings, or waste wood from construction or demolition. Local sources of heat, including geothermal, wasted industrial heat, and municipal waste-to-energy can also be identified.

See also  A Matter of Integrity

Incorporating district energy encourages land-use planners to shape building development in a way that supports its use by, for example, locating producers of excess heat next to users of heat, or developing buildings with a high heat density in a linear fashion to facilitate the building of a shared heat “spine” main.

Improving resiliency
In 2013, severe flooding events shut down the major urban centres of Calgary and Toronto, prompting the evacuation of some residences from their homes and the closing of businesses for several days. With increasingly frequent and intense weather events, the threat of critical infrastructure service interruptions continues to escalate. Going forward, municipalities will need to undertake the critical task of planning and building for such events.

Worries over the economic disruption caused by increasingly frequent, climate-induced severe weather events and escalating carbon emissions are adding urgency and uncertainty for policymakers seeking to mitigate and adapt to the potential impacts of climate change. A June 2013 University of Waterloo report prioritizes Canadian city infrastructure as the primary concern and recommends that “all infrastructures be assessed and addressed at the local community level, where adaptation to a changing climate is most effective,” since “the cost of identifying and addressing infrastructure vulnerability to a future climate during construction is much cheaper than the cost of restoring infrastructure after it has been damaged.”

Linking district energy plants as nodes within a strategic energy framework provides a means for diversity in supply, redundancy, and adaptability. Without a doubt, developing community-based district energy systems is a critical component of the city-building process, requiring deliberate action from any municipality serious about increasing their capacity to respond to future shocks and stresses.

Brad Bradford is the community energy planner at the International District Energy Association and is working to advance the deployment of community-based energy systems in the Canadian market.