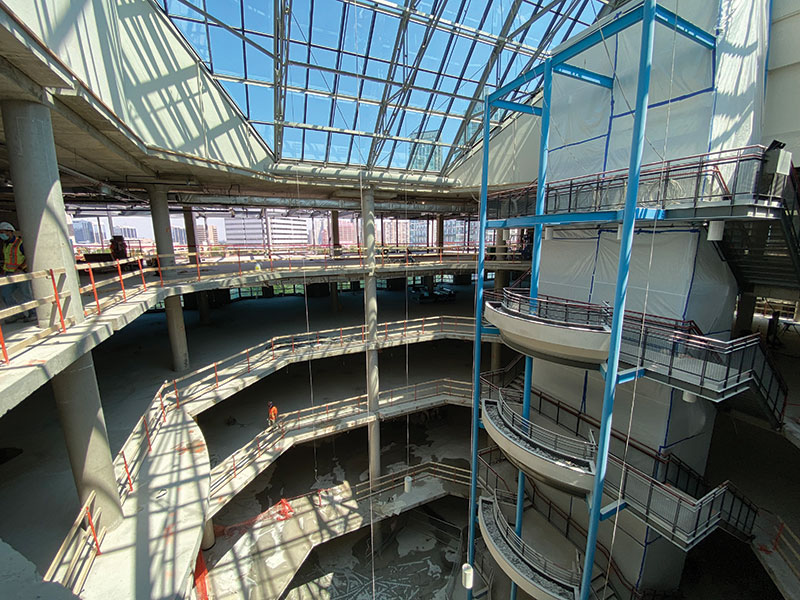 Construction, renovation, and demolition waste continue to be the largest contributors of waste in municipal and regional landfills. Materials like wood, bricks, drywall, metal, cardboard, carpeting as well as furnishings can be reused or recycled.

Recently, municipalities like the City of Mississauga have begun to prioritize programs and strategies that divert waste from landfills.

They are also looking for more ways to effectively reuse, recycle, and manage used products and materials. Not only does reusing and recycling divert material from landfills, but it also helps reduce carbon dioxide emissions. Manufacturing new building supplies and furnishings contributes to the generation of carbon dioxide—one of the greenhouse gases that contribute to global warming—so when materials are reused, or recycled emissions are avoided.

According to Diane Gibson, Mississauga’s environmental sustainability supervisor, the city, in collaboration with the Region of Peel, has diverted more than 75 per cent of its demolition construction waste from landfills.

“We now look at waste from a circular economy approach where everything waste-related has a resource and a value, instead of always looking to recycling,” said Gibson.

The most recent example of this new approach can be seen at the $42.8 million Hazel McCallion Central Library renovation project.

The waste diversion implemented during this project resulted in substantial environmental, community, and economic benefits. Using the Disposal of Surplus City Assets Policy as a guide, staff from across City divisions (e.g., library, environment, space planning, procurement and IT) developed and implemented a plan to reduce the number of City-owned items that would be sent to landfill prior to construction. City staff were able to reuse, recycle, and donate a number of items to reduce environmental impacts.

“With this project it was great to have so many collaborators and we all aligned with the goal of zero waste—to look at how we could best divert the city assets,” said Gibson. “Our lofty goal was zero waste.”

The large-scale renovation of the Hazel McCallion Central Library is the first to take place since its opening in 1991. The library is scheduled to reopen in 2023.

All five floors of public and staff space, including the Glass Pavilion, Breezeway and the Noel Ryan Auditorium are under renovation. After all interior demolition was completed, construction of the fourth-floor sky lounge has commenced, and mechanical and electrical rough-ins are ongoing.

During the renovation period, approximately 28,000 square feet of public space will be added within the existing building, along with plans for an additional 6,000 square feet of secondary space on the fourth floor overlooking Celebration Square.

What stood out for Gibson about the Central Library project was the sheer volume of the materials that were involved.

“It was made more complicated by the fact that there was a mixture of office space and public space material—two different waste streams, meaning there would be two different groups that would be interested in them,” she said.

It’s estimated that more than 120,000 kg of City-owned items were diverted from landfill, including:

See also  A Window into the Underground

What was done differently for the Central Library project was that every item was tracked. “It’s easy to track recycling by weight, but generally with reuse, you track differently, looking at it from the number of items or monetary value,” explained Gibson.

“We decided to weigh the reuse material, using scales on-site, which helped us better explain the success of the project. And it was great to be able to have that number.”

The project also saved the City an estimated $75,000 in third-party expenses. Additionally, by internally reusing and donating assets, this project saved an estimated $4,000 in disposal fees to landfill, which Gibson said resulted in 40 kgs of CO2 emissions avoided from landfill and additional emissions that would have otherwise been created to manufacture new material.

According to Dianne Zimmerman, the City of Mississauga’s environment manager, the Central Library project is following the City’s Corporate Green Building Standards, which include the need to reduce the amount of construction and demolition waste that is sent to landfills or incinerated by promoting good waste management practices.

“Within those standards we do have some important components, including a 75 per cent diversion rate for construction materials and we also look at requirements for low-impact materials, such as minimum requirements for cement replacement in concrete, 50 per cent post consumer recycled content in the rebar. There is also a component around embedded carbon.”

Since the demolition began in April 2021, most of the wood, concrete and scrap metal have been sent for recycling with an estimated 650,000 kg diverted from landfill so far with more to be diverted as the renovations continue. Along with diverted materials, the construction project will also include environmentally sustainable initiatives in the newly renovated building such as bird-friendly glass and lighting control measures to reduce light pollution.

Zimmerman said Mississauga is committed to advancing waste diversion initiatives and exploring the circular economy further to ensure all products, materials and resources are reused or recycled during construction projects.

Featured image: The City of Mississauga underwent a major waste diversion project at the Hazel McCallion Central Library that resulted in substantial environmental, community and economic benefits. (City of Mississauga)

Leading the building team for the Gordie Howe International Bridge

Report bolsters case for greater use of e-permitting in Ontario